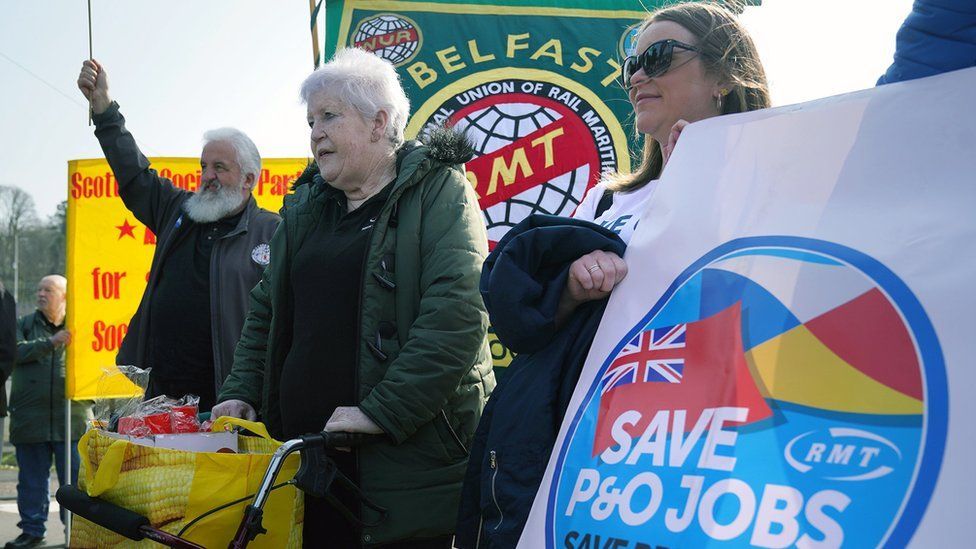 A union has warned P&O Ferries it faces a "summer of disruption" when it resumes passenger services from Scotland to Northern Ireland this week.

The RMT union said it will target ports when the ferry operator starts running its "ships of shame" again.

P&O sparked outrage when it sacked 800 staff last month with a plan to replace them with cheaper agency workers.

Passenger services from Cairnryan to Larne have been suspended since, but are now due to resume on Thursday.

RMT Regional organiser Gordon Martin told BBC Scotland: "The RMT and our comrades in the trade union movement and beyond will be at Cairnryan and other ports on a regular basis, blockading the ports - nothing in, nothing out."

Mr Martin branded the company "capitalist bandits" for the manner in which it sacked staff with no notice via video call.

He added: "We will be after you, we will be coming to Cairnryan, Larne, and elsewhere and we will be targeting your supply chain.

"Anybody dealing with P&O - I'll send a clear message to them - whether it be fuel providers, food providers, whatever it may be.

"We will find out who you are and you will be part of our efforts to get proper legislation in place to protect workers." 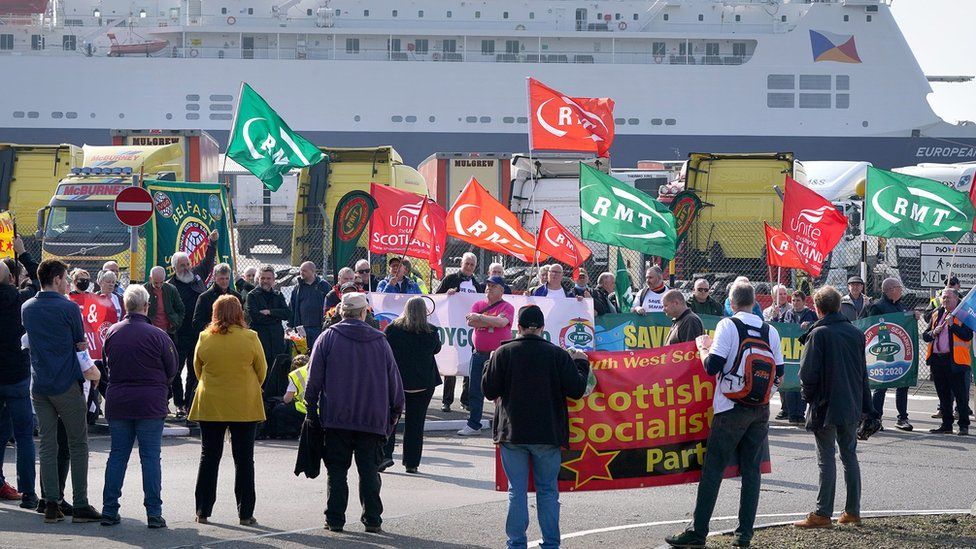 Following the mass sacking, P&O's ferry the European Causeway - which operates between Cairnryan and Larne - was detained in the Northern Irish port over safety concerns.

The Maritime and Coastguard Agency (MCA) said was concerned about "failures on crew familiarisation, vessel documentation and crew training".

On Saturday, it began sailing again with limited services. It is understood that only freight was transported on the vessel.

On Sunday P&O announced on Twitter that the route would resume for "tourist travel" on Thursday 14 April. P&O's Dover-Calais service is also expected to resume on this date.

Stena Line have put on extra ferries from Cairnryan to Belfast to compensate for the postponement of P&O services.

The operator increased its daily sailings on the route from 12 to 18 and said its staff had been working hard to meet demand.

The Scottish government condemned the "serious disruption" P&O's actions had caused to the supply chain between Scotland and Northern Ireland.

A spokesman said: "The employment practices P&O have needlessly pursued have no place in a modern working practices.

"The Scottish government has been absolutely clear that we will stand by the workers who have been let down in the most appalling manner imaginable by P&O."

He added ministers are seeking urgent meetings with the UK government to discuss the matter.

A spokesman for the UK Department for Business, Energy and Industrial Strategy said: "The Insolvency Service has confirmed it has commenced formal criminal and civil investigations into the circumstances surrounding the recent appalling behaviour of P&O Ferries, following the Business Secretary asking they undertake a thorough review.

"We will not provide further comment while investigations are ongoing."