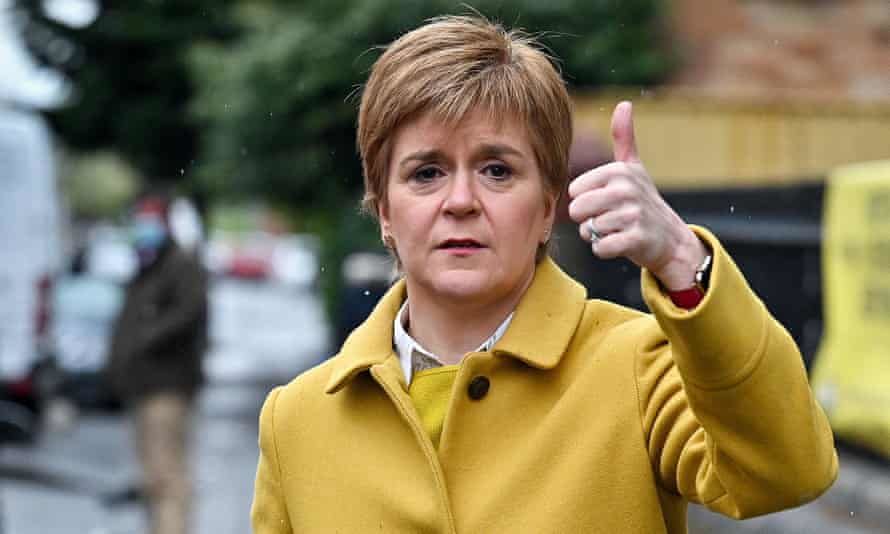 ‘You are a racist’: Sturgeon clashes with ex-Britain First deputy

Nicola Sturgeon has confronted the former Britain First deputy leader Jayda Fransen on the streets of her Glasgow Southside constituency, describing her as a “fascist” and “racist”.

The exchange was captured by an observer and posted on Twitter, after Fransen approached the Scottish National party leader outside a polling station on Lorne Street, in Glasgow.

In 2018 Fransen was convicted of anti-Muslim hate crimes while deputy leader of Britain First. She is standing in Glasgow Southside – the most ethnically diverse constituency in Scotland – as an independent.

Sturgeon, flanked by SNP activists, was filmed telling Fransen she would be rejected by local voters, after Fransen approached her outside the polling station and accused her of being “an absolute disgrace”.

After initially refusing to engage with Fransen, Sturgeon retorted: “We’ll see the locals’ view later on.” When Fransen made derogatory comments about the Scottish government welcoming in people from overseas, the SNP leader replied: “You’re a racist.”

At that point, a Fransen supporter interjected and told Sturgeon he was a proud Scotsman who “didn’t want Scotland turned into another country”. Sturgeon ignored him but told Fransen: “You are a fascist. You are a racist, and the southside of Glasgow will reject you.”

Fransen was sentenced to 36 weeks in prison after being found guilty of racially-aggravated harassment at Folkestone magistrates court in March 2018. Her co-accused Paul Golding, then leader of Britain First, was also convicted of that offence and sentenced to 18 weeks in prison.

The court was told the pair “were not merely exercising their right to free speech but were instead aiming religiously aggravated abuse at innocent members of the public”. They had racially-harassed people inside a takeaway in Ramsgate while handing out leaflets about a rape trial in Canterbury.

Anti-racist campaigners and the Scottish Green party have raised concerns that a previously unknown fringe party calling itself Independent Green Voice, which has several candidates in the Holyrood election, is a vehicle for the far right and Holocaust deniers – allegations the party denies.

Far-right candidates have stood in Scottish elections before, but never attracting more than a few hundred votes.