World Cup: Wales 'knows most of world against us' in Ukraine play-off

Wales' men's football team knows "most of the world will be against them" on Sunday as they host Ukraine for a place in the World Cup finals in Qatar.

Wales manager Robert Page said "most of the world want Ukraine to get through", in solidarity after Russia's invasion of Ukraine that has killed thousands.

Ukrainian refugees in the UK have been offered tickets to the game in Cardiff.

Wales hope to put 64 years of World Cup hurt behind them as they bid to qualify for their first finals since 1958.

The Football Association of Wales has invited the UK's Ukrainian ambassador to the match, while the Welsh government has given the visiting team and their delegates an official "warm Welsh welcome" in support to the people of Ukraine in the war with Russia.

Wales' First Minister Mark Drakeford has sent a message of support to the Welsh team, but added this game was an "opportunity for us to reaffirm our support for Ukraine as it fights Russia's unprovoked and brutal act of war". 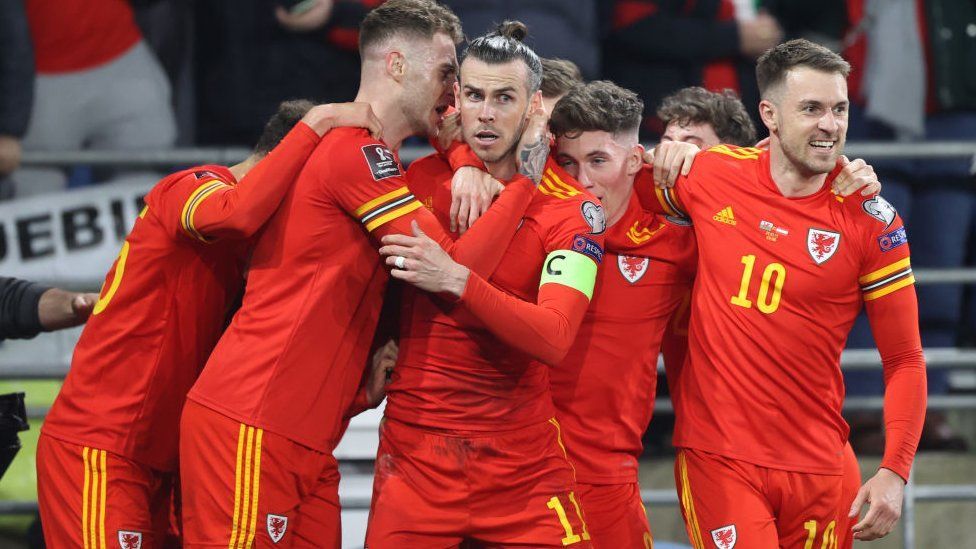 Mr Drakeford went on to say: "It would be fantastic for the squad and the Welsh supporters to have our team competing in the World Cup in November."

'If we could take Ukraine's pain away, we would'

Page, Wales' caretaker boss because of full-time manager Ryan Giggs' ongoing absence, has admitted that all the neutral fans will want Ukraine to win. 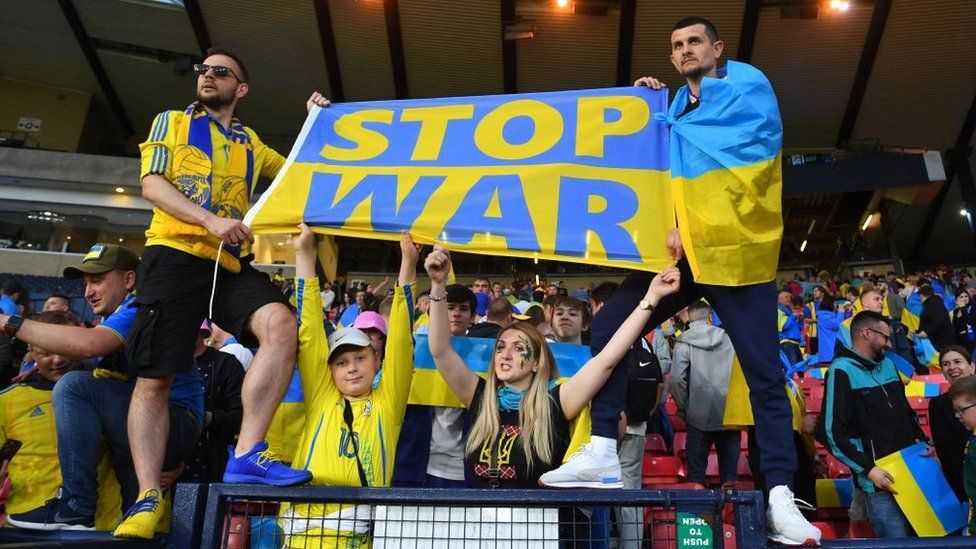 "They won the Eurovision Song Contest because they had the backing of the world," said Page.

"If we could click our fingers and take away the pain the Ukraine are going through, we'd do it in a heartbeat. But when it comes to football and the whistle goes, we'll want to win that game. Business is business.

"We've put ourselves in a good position - 1958 is a long time to wait. Opportunities like this don't come around every day."

What World Cup qualification would mean to Ukraine

Ukraine beat Scotland 3-1 on Wednesday to set-up Sunday's World Cup play-off final with Wales, and their star player Oleksandr Zinchenko has said it will be a "massive game" for everyone in his country. 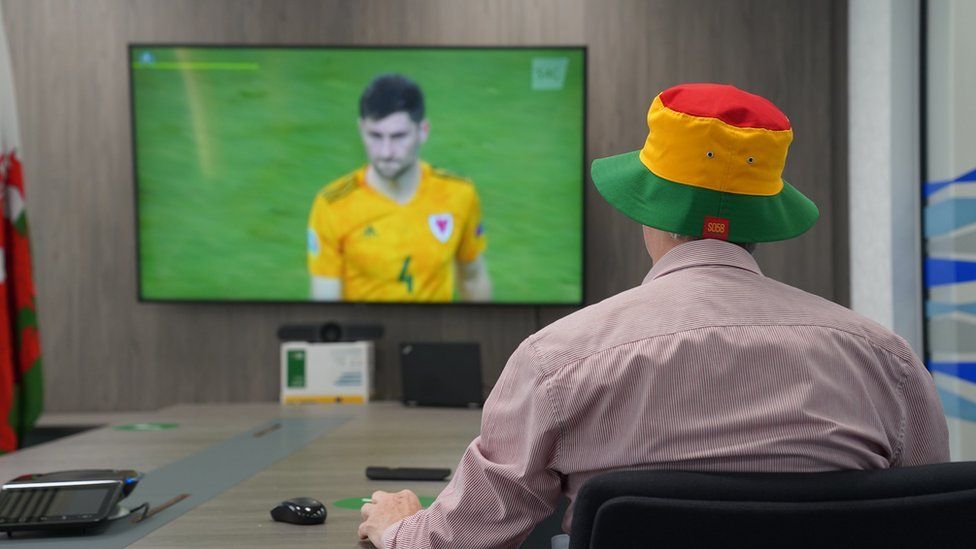 "Everyone knows the situation in Ukraine... and we need to show the performances of our lives," said the Manchester City player.

"We dream as a team to be in the World Cup and we have one more game and we need to win it." 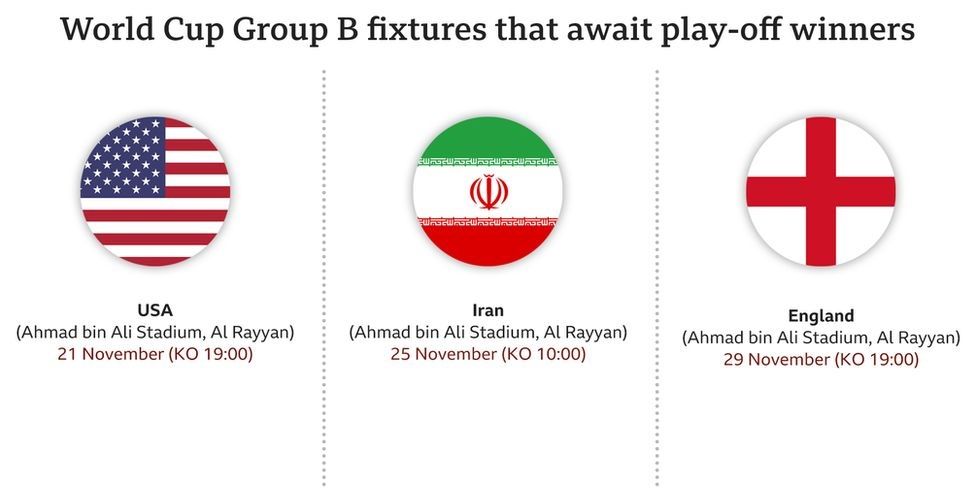 But he added: "As much as I want a Wales win, my heart also goes out to the Ukrainian team over the ongoing situation in their country. 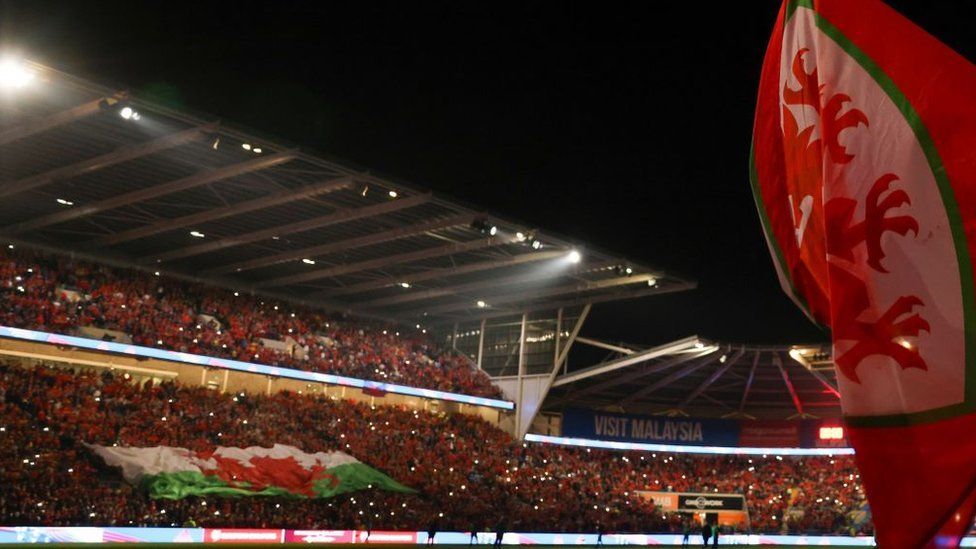 "While there can be only one winner on the pitch, the Welsh nation will continue to stand in solidarity with the people of Ukraine."

People in Wales have so far raised millions of pounds for the Ukraine humanitarian fund and, of the 14 million Ukraine people displaced by the conflict, Wales has housed almost 2,000 refugees - with more than 3,300 visas approved.

One fan is making the round trip of more than 8,500 miles to be in Cardiff - despite flying over to the UK without a ticket. 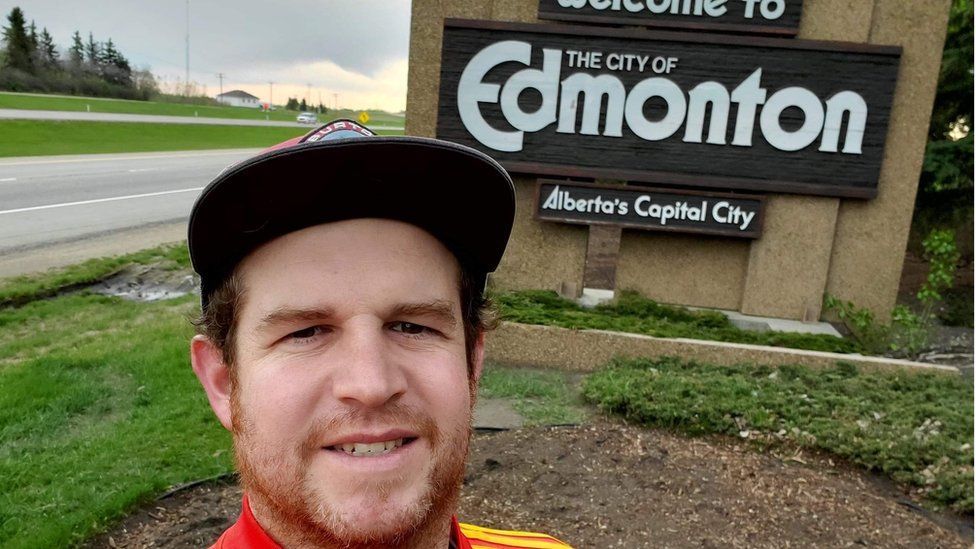 Rhys Davies travelled with his wife and three young children from Edmonton in Canada in the desperate hope of finding a ticket - and his gamble has paid off.

"I was lucky enough to have good family members to save me a ticket," said the 37-year-old electrician, who moved to Canada from Llandovery, in Carmarthenshire, 15 years ago.

"I'm looking forward to it and hoping Wales come through with a victory." 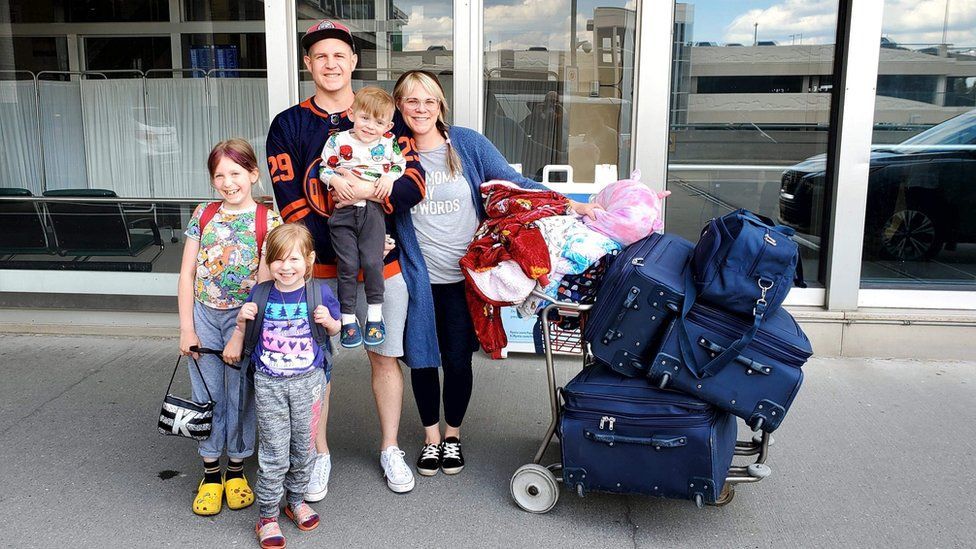 Rhys, whose first Wales game was their memorable win over Italy in 2002 and whose hero is the late captain Gary Speed, normally watches Welsh sporting games in a pub with friends in Alberta. But these World Cup play-offs are different.

"I came over for the play-off semi-final win over Austria in March and that was amazing. I thought to myself there's no way I'm missing the final.

"It's a tough one to call on Sunday, but I'm pretty confident we can do it and get to Qatar."

Tim Hartley, whose first Wales game was their European Championship play-off against Yugoslavia in 1976, hasn't missed a Wales game for 20 years.

And although Wales qualified for the Euros in 2016 and 2020 - reaching the semi-finals and last 16 respectively - Tim knows qualifying for the World Cup is the big one. 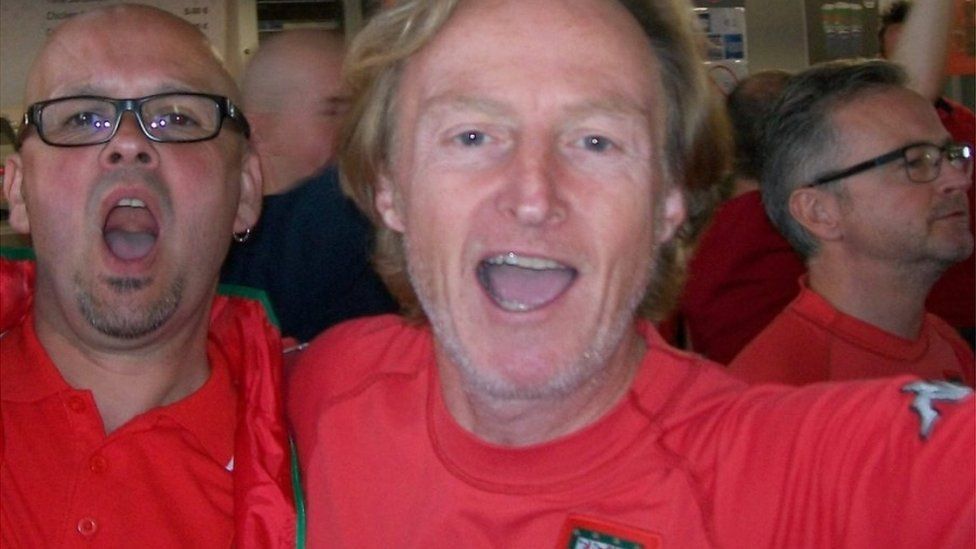 "The whole world is going to be rooting for Ukraine except for us, so it's going to be difficult," said the author from Cardiff.

"It's great to see Ukraine playing football but let's be realistic, we want to get to the World Cup finals."

When was the last time Wales qualified for a World Cup?

Wales haven't played at football's World Cup finals for 64 years - the longest drought of any team in Europe.

In fact, only Cuba and Indonesia - who played at the 1938 finals in France - have gone longer than Wales without qualifying for another World Cup. 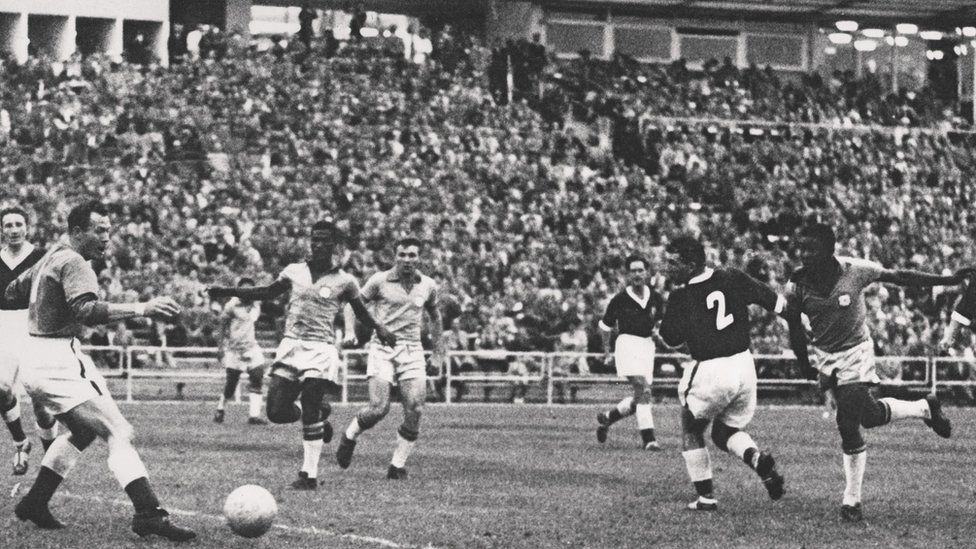 Football's first world superstar Pele was the player to break Welsh hearts in Wales' only previous World Cup appearance in 1958.

The then 17-year-old scored the only goal - and his first on the international stage - as eventual tournament winners Brazil beat Wales 1-0 in their quarter final. 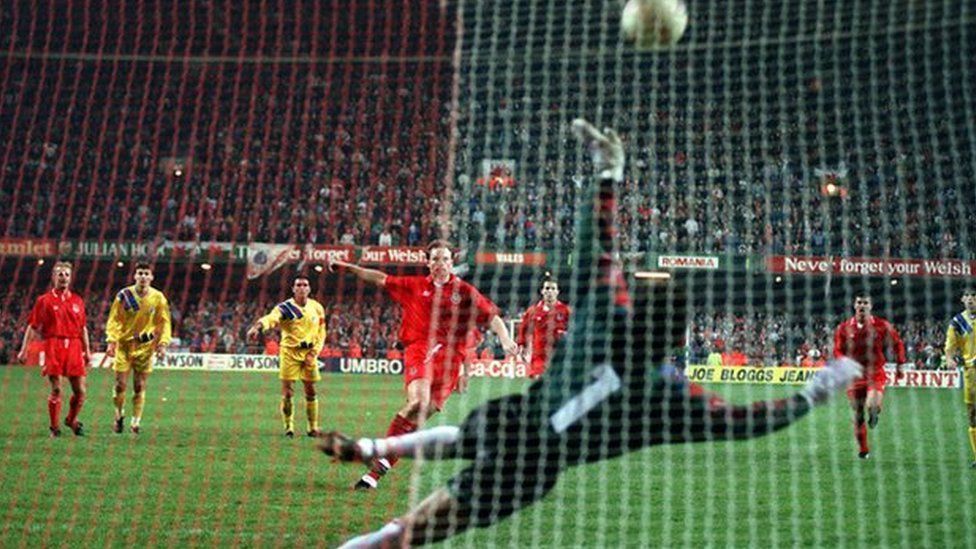 The Welsh have got agonisingly close to qualifying on numerous occasions since 1958 - most notably missing out after controversial penalties in 1977 and 1985, both times against Scotland, before Wales themselves squandered a penalty against Romania in 1993.

Wales broke their major finals hoodoo by qualifying for football's European Championships in 2016 where the Welsh reached the semi-final - before reaching the last 16 of Euro 2020.

Sunday's play-off kicks off at 17:00 BST and is for a place in the 2022 Fifa World Cup later this year where the winners will share Group B with England and Iran in Qatar.

Fans going to the game have been warned not to bring in flares because of what the FAW describes as the "dangers such as loss of sight, limb or digit removal due to their explosive power".

Football chiefs have warned any fan with a pyrotechnic device risks "an FA of Wales ban, probable arrest and a minimum three-year football banning order" - especially after Wales were fined following March's win over Austria.

The Welsh FA are also wary of the growing spate of pitch invasions across the UK following significant matches and have warned any supporters entering the field of play "will be subject to criminal proceedings" and Wales could face sanctions from Fifa. 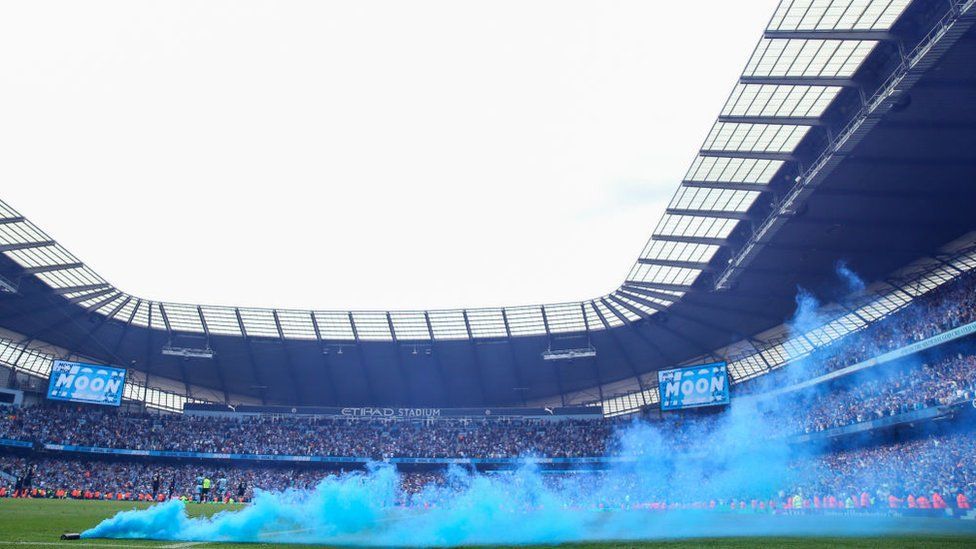 Supporters have been advised to arrive at the ground early because of "additional security perimeters" as the FAW warn it may take fans longer than usual gaining access to the venue.

People without tickets have been told by the Football Association of Wales not to travel to the Cardiff City Stadium without a ticket as there is no fan zone or public screening of the game, either outside the ground or in Cardiff city centre.

Supporters heading to Cardiff on Sunday have been told car parking is "limited" near the ground, so are warned to plan ahead as public transport companies have said services will be "very busy". 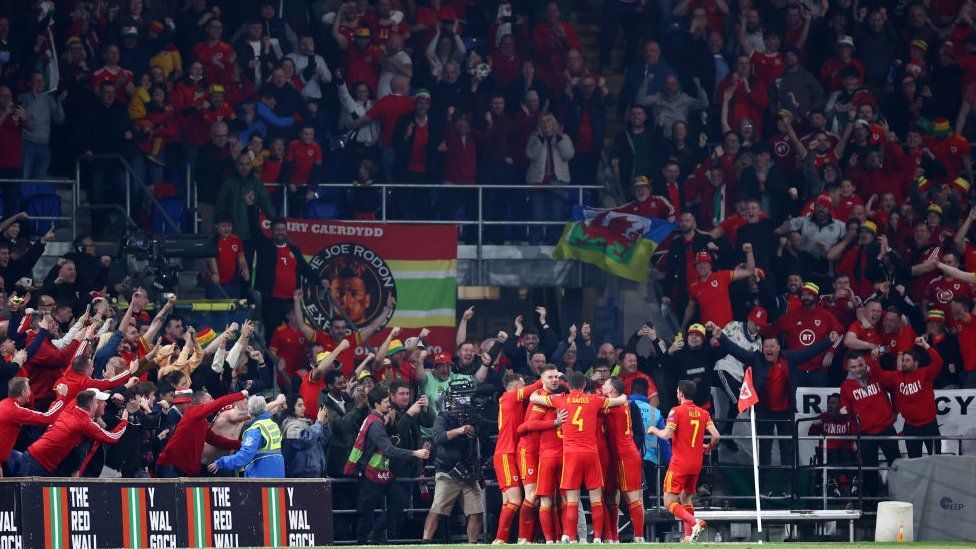 More than 32,000 fans are expected to pack the Cardiff City Stadium for Sunday's World Cup play-off

Engineering work will affect train services between Cardiff and Bridgend - meaning the last train to Carmarthen will leave Cardiff Central at 22:00 rather than the usual time of 22:25.

Valleys Line services between Pontypridd and Merthyr Tydfil will be shut for engineering work so buses will replace trains.

Transport for Wales have reminded football fans travelling to north Wales that the only train after the game is the five-hour 21:07 service to Holyhead, changing at Chester.

Roads around the Cardiff City Stadium may be shut two hours before and two hours after the game with Cardiff council warning of closures to Bessemer Road, Sloper Road and Leckwith Road. The length of closures will "depend on crowds". 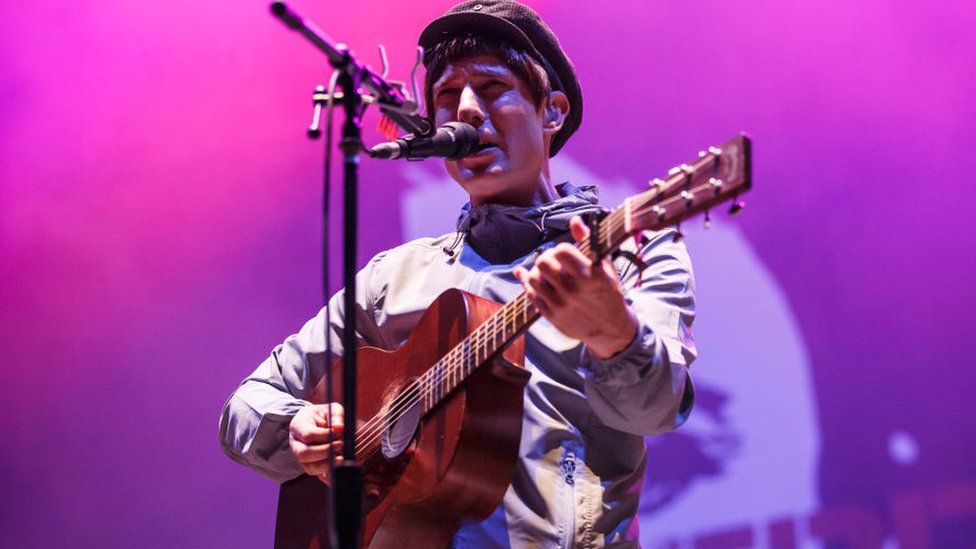 Scottish singer Gerry Cinnamon will perform in front of 10,000 fans at Cardiff Castle on Sunday night

Streets in Cardiff city centre will also be shut in the evening as 10,000 people are expected at the Gerry Cinnamon concert in Cardiff Castle - with road closures after and potentially before gig, depending on crowds.

Where the play-off winners will play their World Cup games

This stadium was built on the site of an old ground with the same name - with more than 80% of the construction materials reused or recycled - including from the initial ground.

Its glowing facade is "comprised of patterns that characterise different aspects of the country".

It will host Al Rayyan Sports Club, with a 20,000 capacity, after the tournament.

DJ Katie Owen, says supporters will be singing their "hearts out" on Sunday.
Wales defender Ben Davies said it can feel "insensitive" to play a football game when opponents Ukraine are at war at home
Comedian Elis James explains how Wales made it to their only World Cup
Add Comment