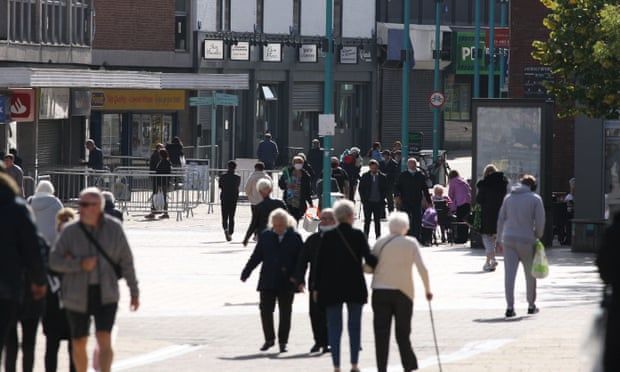 Exclusive: average life expectancy in most deprived areas is 78.7 years, worse than the average of any OECD nation except Mexico

Women in the poorest areas of England are dying earlier than the average female in almost every comparable country in the world, according to a damning analysis of life expectancy data that MPs and leading health experts have called “shocking”, “devastating” and “unacceptable”.

Millions of women living in the most deprived areas of England can expect to live 78.7 years, almost eight years fewer than those living in England’s wealthiest areas, the Health Foundation has discovered.

It is worse than the average life expectancy for women in every single one of the world’s OECD countries except Mexico.

The stark analysis, seen by the Guardian, also reveals that the average life expectancy for all women across England and the UK is lower than the global OECD average. The UK ranks 25th out of 38 OECD countries when it comes to the number of years a woman can expect to live.

Ministers have repeatedly promised to tackle decades of gender inequality and pledged to “reset the dial” on women’s health as part of their levelling-up agenda.

But experts say the findings show the government has a “mountain to climb”, with a “fundamental shift” in policy urgently needed to enable women to enjoy longer, healthier lives.

“The government has committed to addressing stalling life expectancy and this has been described as a core part of the levelling up agenda,” said Jo Bibby, the director of health at the Health Foundation.

“However, it has so far failed to acknowledge the mountain it needs to climb to bring life chances in the UK in line with other comparable countries.” 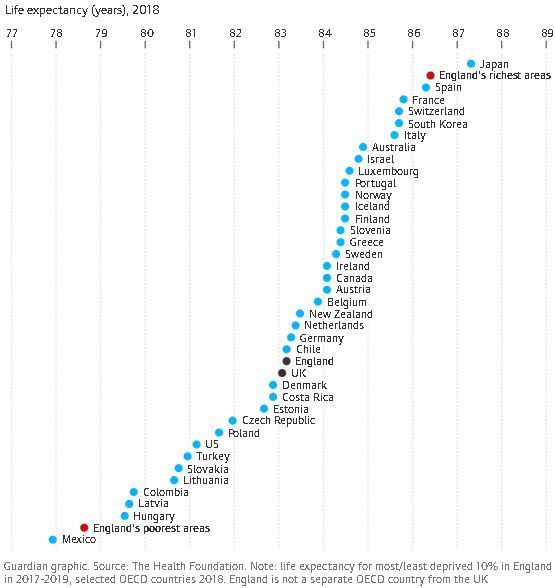 Women living in the 10% most deprived parts of England have a lower life expectancy than the average woman in countries such as Colombia (79.8 years), Latvia (79.7 years) and Hungary (79.6 years), according to the new study. Globally, only Mexico has a lower overall life expectancy (77.9 years) than women in the poorest parts of England.

The gap in life expectancy between women in the richest and poorest areas is 7.7 years. Women in the 10% least deprived areas in England live on average 86.4 years – higher than the overall life expectancy for women in any OECD country, except Japan, which has the highest level for all OECD countries at 87.3 years.

“When OECD countries are ranked by life expectancy, the UK comes in 25th – a somewhat disappointing showing for the world’s fifth-largest economy,” said Bibby.

“However, an even more concerning picture emerges when we look at the gap between the rich and poor. The stark reality … is that the poorest can expect to live shorter and less healthy lives than their richer counterparts.”

England is not an OECD member, like the UK, but the Health Foundation compared life expectancy for 2018 in England – as well as the UK – to other OECD countries. It did not examine Wales, Scotland or Northern Ireland.

The cost of living crisis is likely to further widen the gap between rich and poor, experts say. The pandemic has already hit the finances of millions of families and rising prices will force growing numbers to choose between going without essentials that are vital to living healthy lives – such as heating and food – or going into debt.

Clare Bambra, a professor of public health at Newcastle University, who was not involved in the analysis, said it highlighted the “vast scale” of health inequalities in England, which were “likely to worsen through the very real health threats posed by the rising cost of living”.

Hannah Davies, the health inequalities lead at the Northern Health Science Alliance, who was also not involved with the research, described the findings as “shocking”.

She added: “Inequalities between the richest and poorest in England are morally and economically unacceptable and the devastating impact they’re having on the poorest women is shown here clearly.

“If the government is to achieve its healthy life expectancy goals, it cannot ignore deprivation in the UK and must invest in helping those worst affected by the cost of living crisis through significant, funded support.”

Bibby said the government must focus on providing secure jobs, adequate incomes, decent housing and quality education to improve women’s health in the poorest areas, otherwise levelling up “will remain little more than a slogan”.

Anneliese Dodds, the shadow secretary of state for women and equalities, said the “shocking figures” showed women were being failed by the government.

“Everywhere you look the Tories are letting women down, whether it’s their inability to confront the cost of living crisis, their broken promise to deliver a women’s health strategy or their failure to tackle the entrenched structural inequalities in healthcare that are putting black, Asian and minority ethnic women at risk,” she added.

A Department of Health and Social Care spokesperson said: “We are committed to levelling up health across the country and our health disparities white paper, due later this year, will set out action to reduce the gap in health outcomes between different places, so that people’s backgrounds do not dictate their prospects for a healthy life.

“We are also set to publish our women’s health strategy later this year to tackle gender health inequality and ensure everyone gets the high-quality care they need.

“We are also helping local authorities improve public health by increasing their grant to just over £3.4bn this year. We are investing a further £36bn in overall health and care over the next three years to put in place comprehensive reforms that are sustainable and fit for the future.”