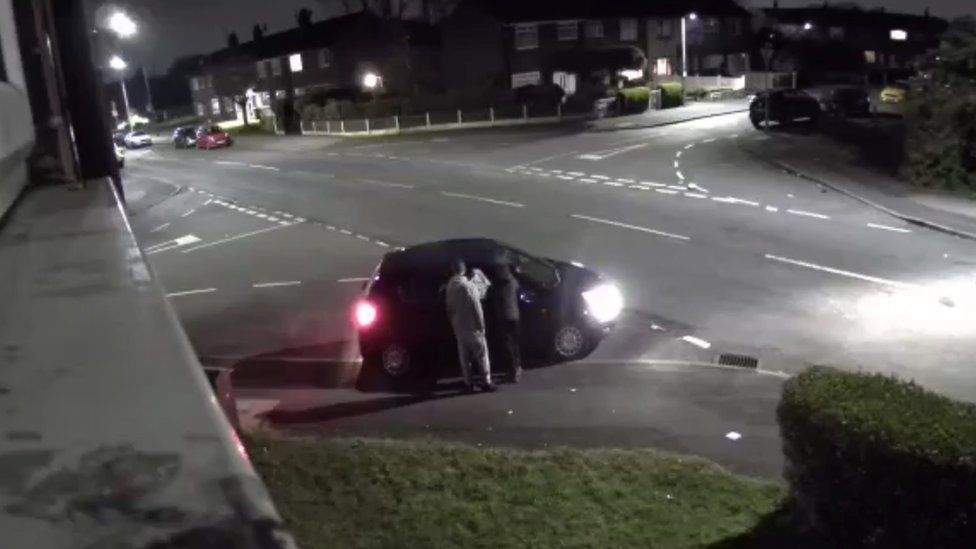 Woman tracks down her own stolen car before a police investigation

In one instance, a disabled man said police failings led to him being targeted by a gang, assaulted and repeatedly burgled.

In another, a woman felt forced to track down her stolen car - leading to her being threatened by a man with a crowbar.

They are among the victims of crime in England and Wales who say they are being left in despair and forced to do their own detective work, while facing significant delays for police help.

BBC research indicates forces are taking an average of three minutes longer to attend serious offences in England and Wales compared with six years ago. And while the government has repeatedly said crime is a key priority, some forces are facing criticism for not investigating lower-level offences.

*  Recorded crimes leading to a charge or court summons fell annually for seven years, up to March 2021

*  However, a fall in many crimes and better reporting and recording of offences in recent decades may explain this trend

A BBC News investigation has spent months talking to people about their experiences of reporting crime. 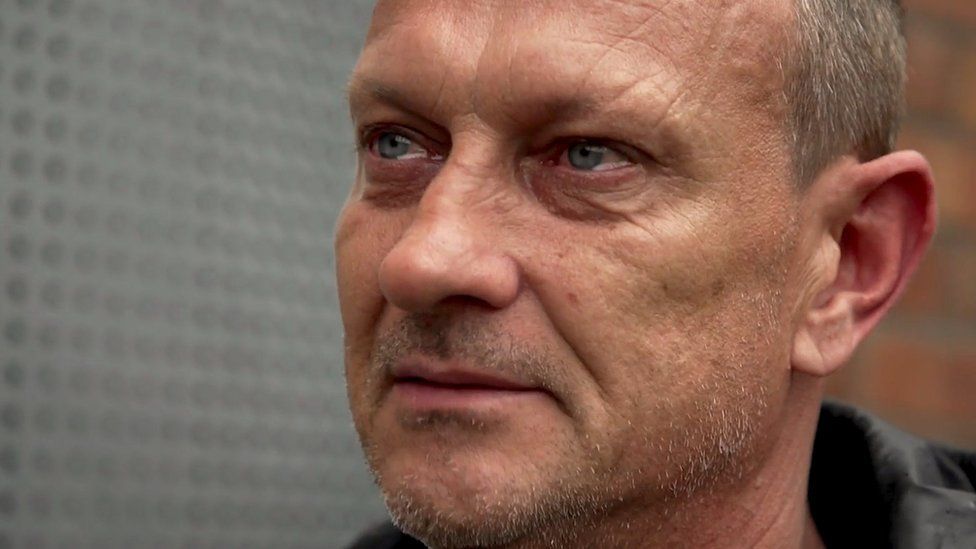 After Stephen Argent moved to a new house in Wigan, last year, his mobility car - specially designed to aid his walking disability - was set on fire on his driveway for no apparent reason.

He called the police but says officers did not investigate. No-one has ever been charged. Mr Argent replaced his car but it was then stolen from outside his home five months later.

That same month, he was beaten up outside his house, an attack that was filmed on CCTV. Mr Argent says he rang 999 after being assaulted but it took three days for Greater Manchester Police to visit and speak to him. Police inaction, he feels, emboldened the gang.

At the end of November, he came home to find his house had been burgled and every room, including his children's bedrooms, had been turned upside down. Burglars then returned on two further occasions.

The second time was so brazen, his neighbour even filmed his washing machine being loaded into a van.

Mr Argent says no officers or forensic teams visited him or his house after two of the burglaries. He's had to move out of the area for his own safety and says he is now homeless. He describes the police response as "atrocious".

"It's just drained the life out of me, I've got nothing left," he says. "My home, my cars, everything - it's gone. I've got nothing at all. If the police had done [something] from the start, none of this would have happened."

BBC News understands that a man was jailed for the assault. 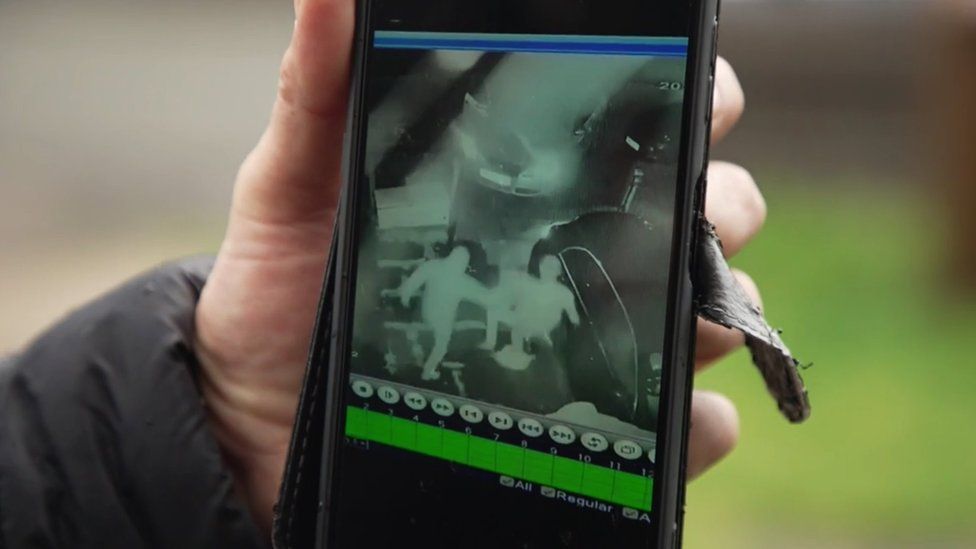 Many of the people BBC News spoke to complained about officers not attending serious incidents for hours after they had called 999 - and not turning up for days on some occasions.

We've confirmed at least five cases of what are known as Grade 1 emergencies when forces did not visit victims or crime scenes for more than two days.

*  A mother who reported her 12-year-old son had been sexually assaulted by a man in pub toilets. She says it took a week for police to investigate and officers then accidentally wiped CCTV footage

*  A victim of domestic violence who was assaulted by an ex-partner in front of her children, aged 2 and 4, and says she was told no-one could visit her until the following morning. The man returned later that evening

*  A stalking victim whose home officers failed to attend despite repeated visits by her stalker, which included death threats

Some people also said they felt moved to investigate their own crimes - and take significant risks with their safety - because they felt the police were not helping them.

Michelle Almond told us she felt forced to turn to social media for help when thieves stole the car she relies on for her job as a community care assistant.

After reporting the theft and giving a statement, she rang the police three or four times a day for help without receiving a return call. Meanwhile, on Facebook someone responded to her post about the theft, saying they had seen the car being joyridden around a nearby estate and that it had been recorded on their CCTV.

Ms Almond said she decided to try to track down the car herself. The next night she drove to the spot where the car had been seen and found it parked in front of a house.

Yet, despite her informing the police where it was, no officers were sent out. The next night she did the same, again to no avail. 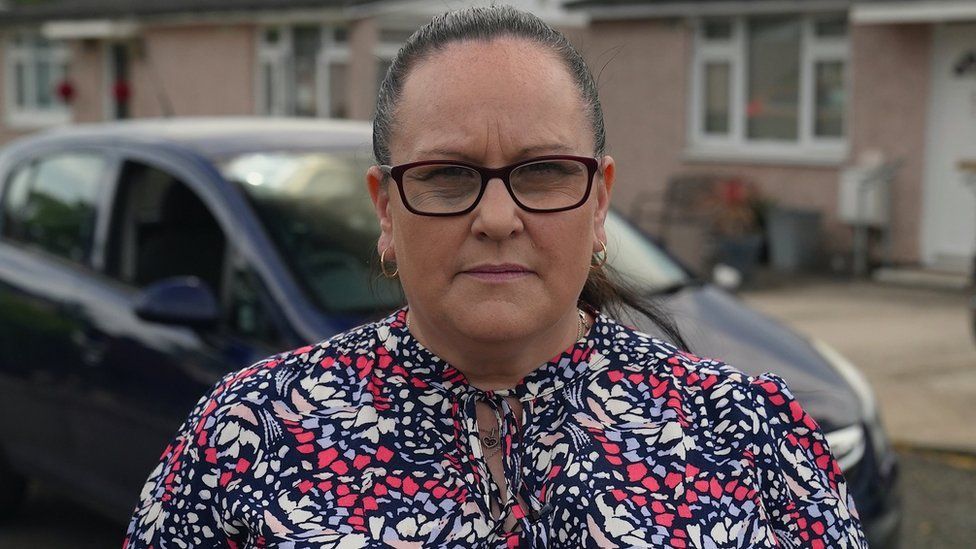 "Every single night we would see my car, I was giving them all the information, and they would just do nothing," she says. On the fourth night, she came across it while it was on the move and decided to follow in her daughter's car.

At one point the car entered a dead end. After coming to a stop, a man with a crowbar confronted them. Ms Almond says she had to quickly reverse up the street to escape.

The next day the car was found abandoned among hedges with its windows smashed in. Ms Almond says she feels angry she had to put herself at risk to recover it.

"It's just a car but obviously that car is our livelihood, it's your income," she says. "We did our own detective work and still didn't get any help," she added. "Facebook solved my crime, not the police." 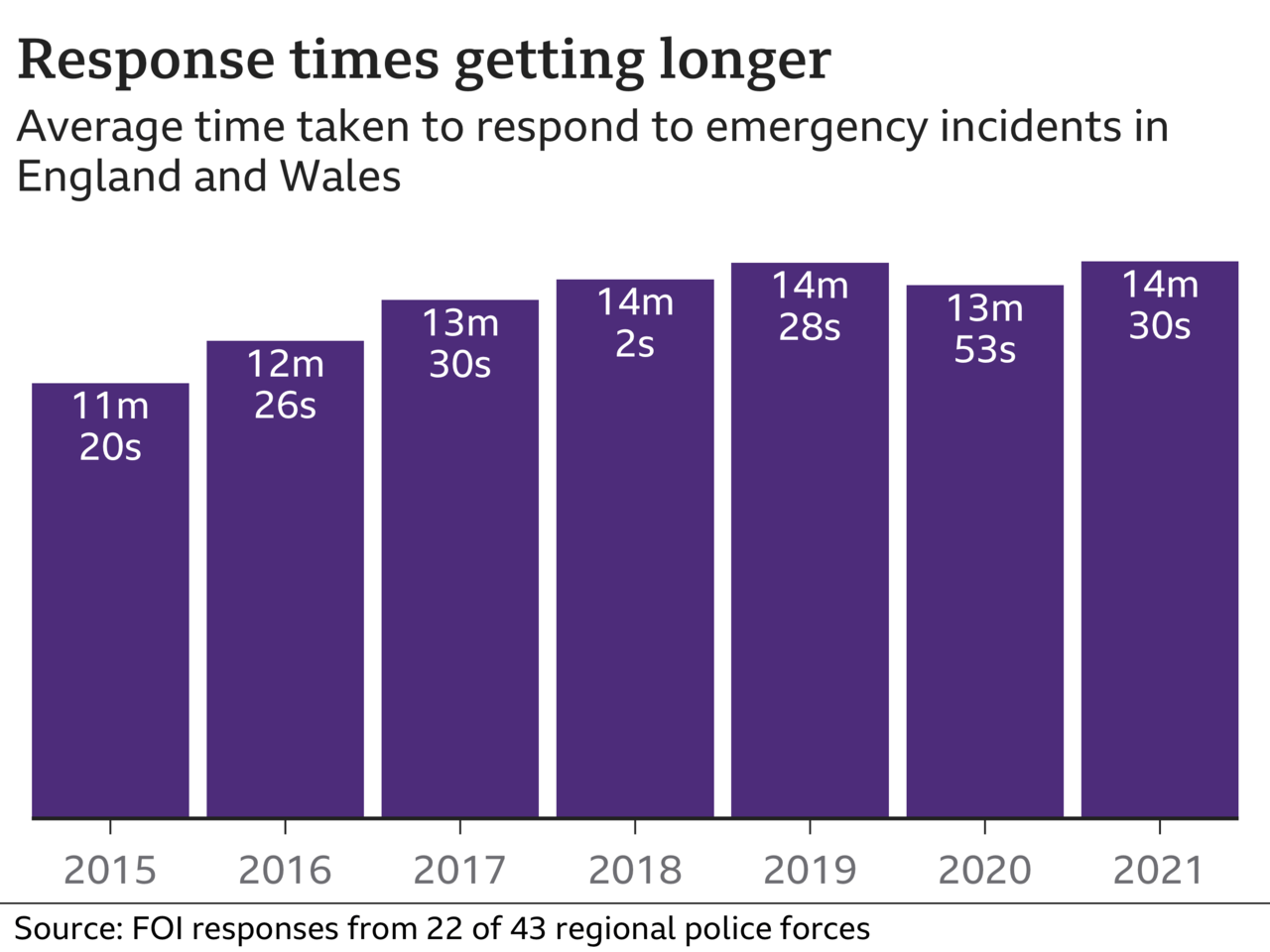 Information requests from 22 of the 43 police forces in England and Wales suggest officers are now 28% slower to attend Grade 1 emergencies after receiving 999 calls than six years ago. This equates to taking three minutes longer on average to arrive at serious incidents.

Figures suggest forces are 44% slower to arrive at these incidents than in 2013, according to responses from 19 forces able to provide figures from then. Police in Northern Ireland and Scotland declined to provide figures. 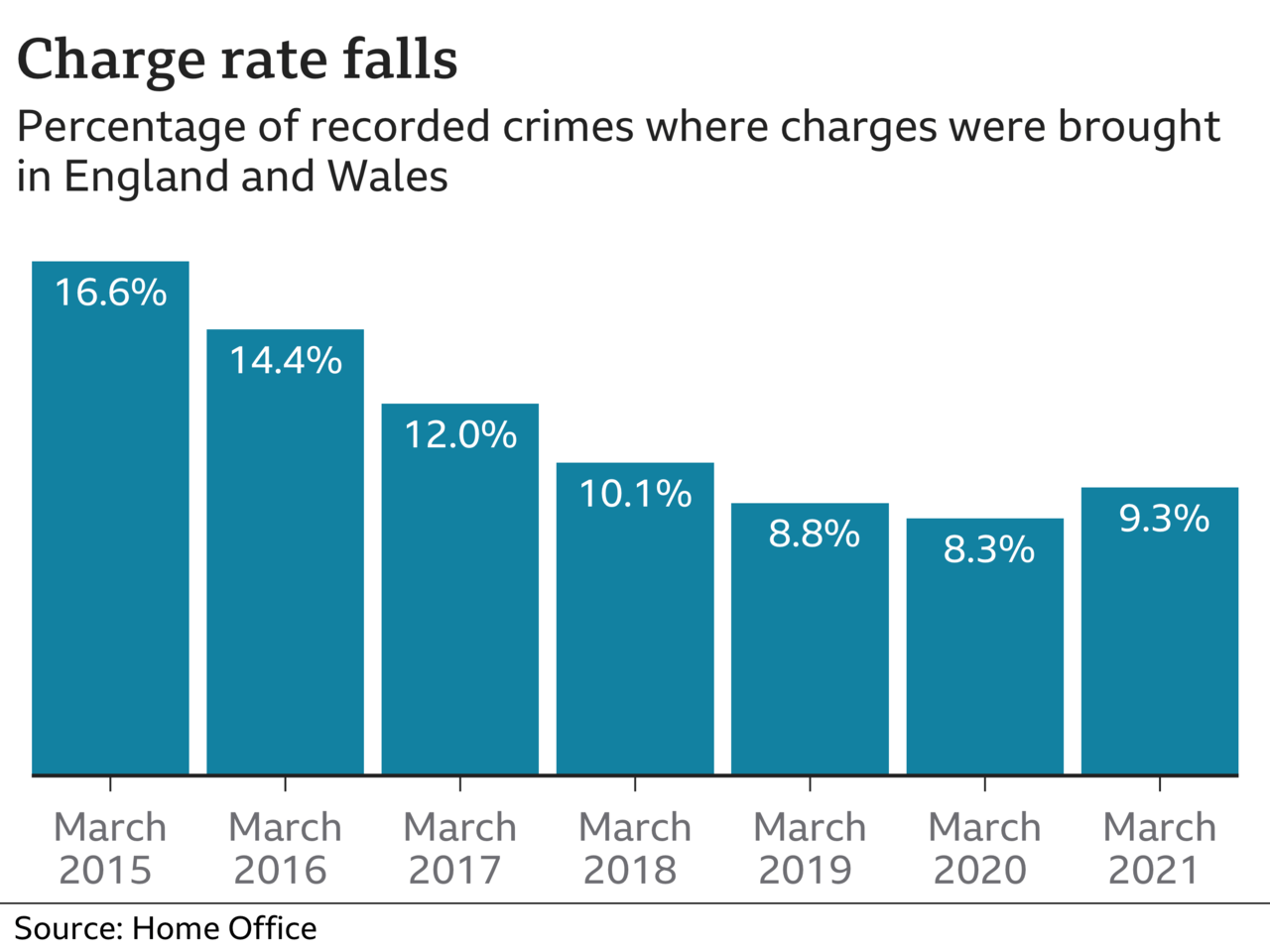 The charity Victim Support says the findings are "seriously alarming" and a slower response could mean the chance to prevent serious harm is missed or crucial evidence cannot be collected. When it comes to emergency calls, it says "minutes and seconds matter".

BBC research also shows the number of recorded crimes leading to a charge or court summons for a perpetrator has fallen for the past seven consecutive years, up to March 2021.

It means the proportion of recorded crimes leading to a charge or court summons has fallen by 40% from 2015 to 2021. However, data from the Crime Survey for England and Wales shows there has been a fall in many crimes since the late 1990s, which may mean much of this trend is accounted for by better reporting and recording of offences. 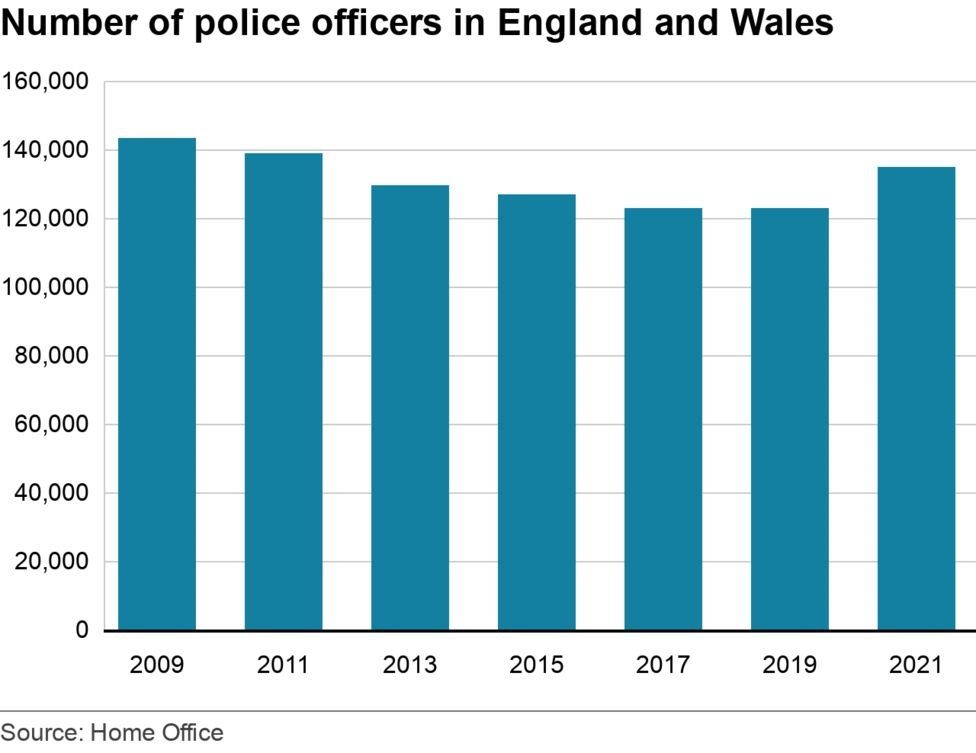 In a statement, Policing Minister Kit Malthouse said: "The public should have confidence in the police and that their force will do everything in their power to solve and prevent crime.

"We know that responding quickly to 101 and 999 calls is vital when tackling crime, which is why we have committed to improving the responsiveness of local police by publishing league tables to hold local forces to account."