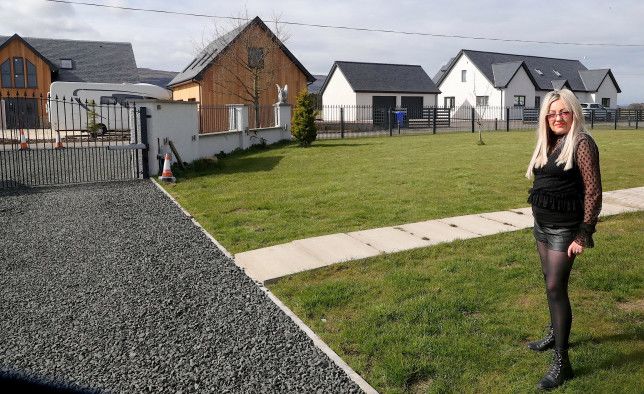 A woman says she has been forced to put her dream home on the market after a new property was built so close by that she can see her neighbours showering.

Pauline Boyd and her partner bought the house happy with its peaceful location in Scotland.

But after moving in, a new property was built close by – and she didn’t receive a letter about one stage of the planning application.

Ms Boyd says the garage of the new house looks directly into her kitchen and living area.

To make things worse, she said: ‘There is also a shower room in the property and so we can see people through there while we’re eating our dinner, even though the windows are frosted.’

Her problems come as another homeowner has been in the news for concerns about the location of their property.

Jackie McCormack insisted she wasn’t ‘stupid’ after buying a house backing onto a busy dual carriageway then complaining it was too noisy.

She also says she will have to sell her home because of the issues.

Ms Boyd bought her house in Blair Drummond, Perthshire, three and a half years ago to be closer to her family.

She told the Stirling Observer: ‘When we first got here, it was quite rural and while we had neighbours, they weren’t really in your face.

‘It’s got to the stage that it our stress levels are really bad and really impacted our lives – we’re having to keep our shutters closed but we don’t want to be doing that.’

Ms Boyd received notification of an initial planning application submitted in March 2019, and submitted her concerns.

However, she was not notified about a second application with details of the plans that was submitted for approval in September the same year.

A letter from the council in January this year told her that she had been identified as potentially affected by the new building, but: ‘It is likely that the officer was distracted by taking a telephone call midway through the task and did not complete the printing of the letter to issue to you.’

Ms Boyd said: ‘We moved here for rural living but we feel like fish in a bowl.’

She has now put her house on the market, despite having done renovation work to it and planning to stay there for the long term.

A Stirling Council spokesperson said that Ms Boyd’s objections had been properly considered with the first planning application, and that her house was three times the minimum privacy distance from her neighbour.

They acknowledged that she should have been able to comment on the second application.

‘The council has apologised in writing to Mrs Boyd regarding this matter and her complaints have been fully investigated,’ they said.

‘Further quality assurance processes have been put in place to ensure this error is not repeated.’