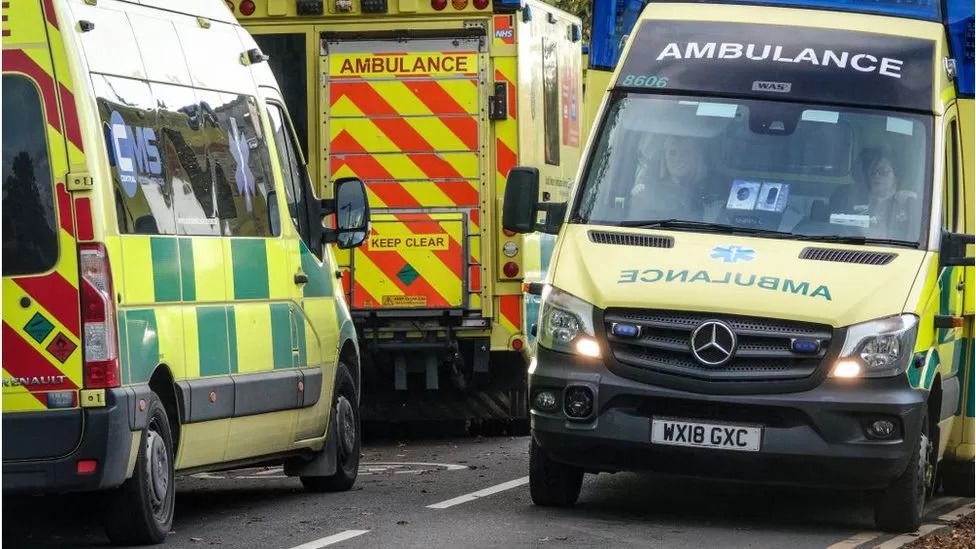 The Royal College of Emergency Medicine says it believes this will have been the worst December for hospital bed occupancy and emergency care delays.

The warning comes as hospitals face soaring demand driven by winter infections like flu, strep A and Covid.

The government says it is "working tirelessly" to ensure patient care.

A number of NHS trusts have declared critical incidents in recent days, signalling they are unable to function as normal due to extraordinary pressure.

Dr Adrian Boyle, the president of the RCEM, told the BBC that hospitals were "too full" and the situation was "much worse than in previous years".

Ambulances waiting outside hospitals was the "most obvious marker" of this, Dr Boyle told Radio 4's Today programme.

In November, around 37,837 people waited more than 12 hours in A&E for a decision to be admitted to a hospital department, according to data from NHS England.

This was more than triple the equivalent figure for November 2021, when an estimated 10,646 waited longer than 12 hours.

In separate remarks to the PA news agency, Dr Boyle said he "would not be at all surprised" if December proved to be the worst month on record for hospital occupancy rates.

Over 90% of senior doctors reported there had been people waiting in their emergency department for more than 24 hours last week, he added.

Dr Boyle remarked: "The gallows joke about this is now that 24 hours in A&E is not a documentary, it's a way of life."

He said the health service had been stretched further by a "staff retention crisis", as well as recent nurse and ambulance worker strikes and a "demand shock" caused by winter infections.

Fears of a "twindemic" of flu and Covid infections were "sadly being realised", added MP Steve Brine, chair of the Commons health and social care select committee.

This was "very heavily weighted" towards flu infections, Mr Brine said in his own interview with the BBC.

Flu case numbers in Wales have put the country's hospitals in an "unprecedented situation", says its top doctor - and those with symptoms have been asked to stay away from hospitals.

At the same time, the 111 telephone helpline has come under "significant pressure", Dr Sir Frank Atherton said. People have instead been urged to consult the 111 website.

Meanwhile in England, the latest figures show there were more than 3,700 patients a day in hospital with flu last week - up from 520 a day the month before, and just 34 a day this time last year.

Among the NHS trusts to have declared "critical incidents" in recent days are:

Other trusts previously declared critical incidents but have since removed the status as conditions improved - including Surrey and Sussex Healthcare, Sandwell and West Birmingham Hospitals, East of England Ambulance, and University Hospitals of Derby and Burton.

No critical incidents have been declared in Scotland, but A&E doctors have urged NHS Greater Glasgow and Clyde to declare one over "grave concerns" over patient safety.

In his own comments to the PA news agency, Dr Nick Scriven, the former president of the Society for Acute Medicine, warned that UK's urgent care system was being "pressurised like never before".

He urged people to "consider carefully" whether or not their problem required emergency care before attending a hospital.

Dr Scriven said the NHS should consider a "short-term moratorium" on the pressure to ease backlogs in elective procedures - with services working together "for the common good".

A spokesperson for the Department of Health and Social care said: "We recognise the pressures the NHS is facing following the impact of the pandemic and are working tirelessly to ensure people get the care they need, backed by up to £14.1bn additional funding for health and social care over the next two years.

"This winter, the government has provided an extra £500m to speed up hospital discharge and free up beds - and the NHS is creating the equivalent of at least 7,000 more beds to help reduce A&E waits and get ambulances back on the road.

"We're supporting and growing the health and social care workforce through training and recruitment campaigns at home and abroad, and there are record numbers of staff working for the NHS, including 9,300 more nurses and almost 4,000 more doctors compared to September 2021."