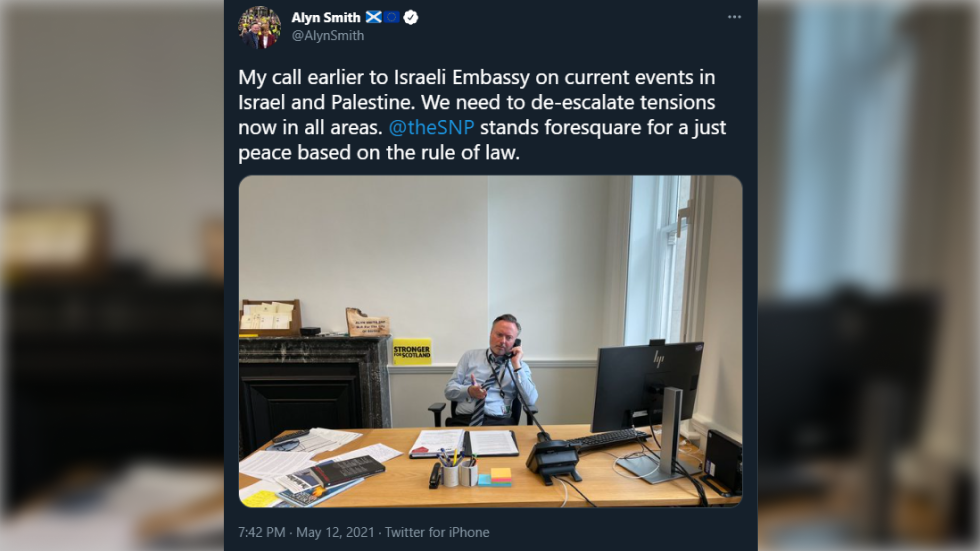 ‘Who are you?’ Scottish MP mocked for photo-shoot of his phone call to Israeli Embassy to de-escalate Hamas conflict

Alyn Smith may not be a big name on the world stage, but the Scottish MP has made waves after he called the Israeli Embassy, in an apparent bid to de-escalate the latest deadly conflict with Hamas, drawing ridicule in the process.

On Wednesday, Smith, the Scottish National Party (SNP) MP for Stirling, tweeted a photo of himself sitting at his desk on the phone.

“My call earlier to Israeli Embassy on current events in Israel and Palestine. We need to de-escalate tensions now in all areas,” the lawmaker wrote.

However, critics were quick to question the SNP Foreign Affairs Spokesperson’s motives, not to mention his relevance to Middle-Eastern geopolitics.

One user mocked that, while government ministers can phone their foreign counterparts directly, the SNP are left to “call the Israeli Embassy switchboard and ask to speak to the manager.”

“Shamelessly trying to look like they have influence on the world stage in another desperate independence plug,” they added.

Others also suggested Smith was “showboating” with his apparent call and would likely be sent to answerphone or perhaps put on hold with The Who’s song “Who Are You?”

Smith was also likened to David Brent, the infamously self-aggrandizing manager played by Ricky Gervais in the British sitcom, The Office.

Others pointed out they might be more effective ringing the Israeli Embassy themselves to ask for a de-escalation of the conflict, while perhaps Smith should stick to local issues.

“After you've solved the Arab-Israeli conflict, any chance you could get the bins uplifted more than once a month?,” one said.

The SNP’s bid for Scottish independence also came up, with one user branding Smith’s phone call: “Nationalists lecturing other countries with nationalists how not to be nationalists.”

Not all comments were at Smith’s expense, however; the author and historian Tom Holland also weighed in to try and offer the MP some light-hearted guidance.

“I hope he reminded the Israeli embassy that the Scots are descended from Scota, the daughter of Pharaoh who rescued Moses from the bullrushes. I am sure it would have broken the ice,” he said.