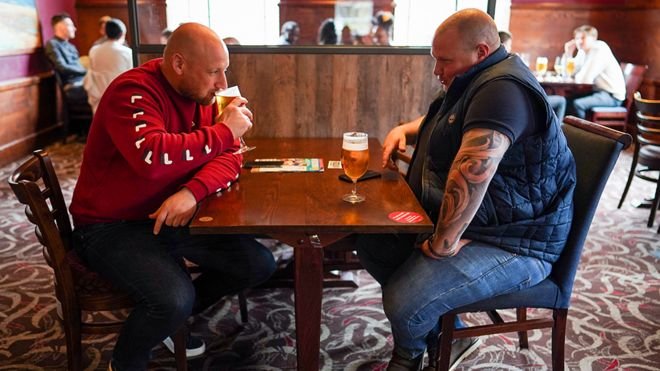 What's the new socialising rule the PM 'misspoke' about?

New restrictions have been introduced in parts of north-east England, banning two households from mixing with each other indoors.

The prime minister apologised after he "misspoke" when answering a question on the new rules.

In the affected areas, people will no longer be allowed to mix with anyone outside their own household in any indoor setting (although support bubbles are exempt).

In other words, you will be banned from going for a drink or a meal with someone you don't live with, in a pub or restaurant. The BBC has been told mixing in pub gardens or outdoor restaurant spaces will not be illegal but goes against advice.

Households in the region had already been advised to avoid mixing - including in homes - but the new ban will be enforced with fines. Anyone over 18 found breaking the rules can be dispersed by police, or face fines starting at £200 and going up to £6,400.

The restrictions don't apply to schools or workplaces.

The measures have been criticised for causing "confusion" because of a lack of detail.

When asked if people in the North East can still meet people from other households outside, such as in a pub garden, Mr Johnson said people should follow local guidance and urged them to use their common sense. He went on to wrongly talk about the rule of six. 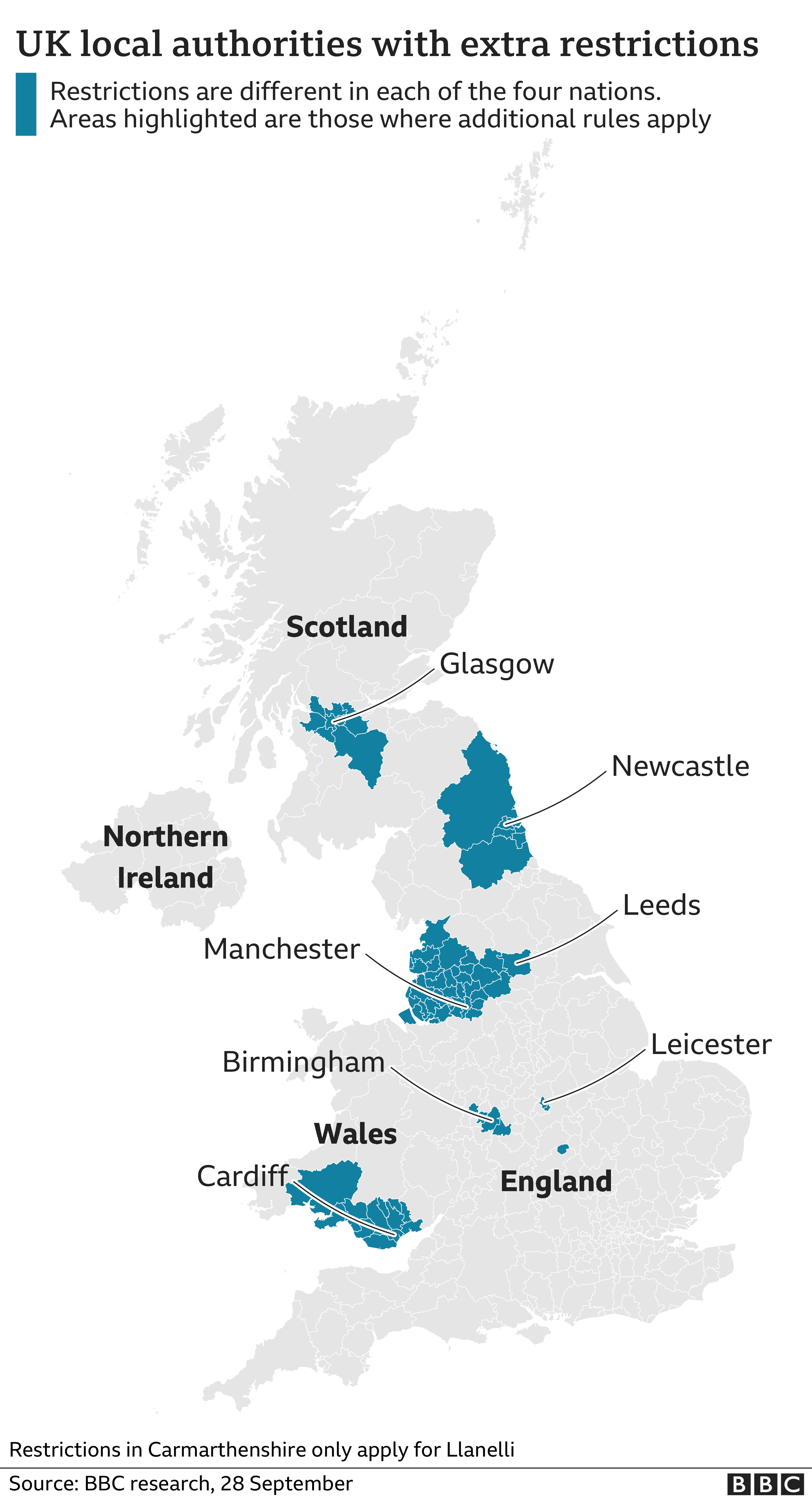 Which other areas have restrictions?

The nature and extent of restrictions vary around the UK. Some of the rules and places include:

* People cannot mix in homes or gardens with anyone outside their household in Leeds, Wigan, Stockport or Blackpool

* People in Merseyside, Warrington, Halton and the parts of Lancashire not already under tightened restrictions must not mix with people outside their household in homes or gardens. Pubs and restaurants must shut at 22:00 BST

* Residents in Bradford, Kirklees, Calderdale, Wolverhampton, Oadby and Wigston are banned from socialising with other people outside of their own households or support bubble in private homes and gardens

* Households in Birmingham, Solihull and Sandwell are not allowed to mix with anyone they do not live with in their home or garden, unless they’re in their support bubble

* Those in parts of Greater Manchester - including Salford, Bury, the City of Manchester and Oldham, are advised not to mix with those from outside their household or support bubble

* Also in Greater Manchester, in Bolton, there are visitor limits on care homes, while hospitality venues will only be able to serve takeaways and must close between 22:00 and 05:00

* In Leicester, people cannot host anyone they do not live with in their home or garden, unless they’re in their support bubble

* From 18:00 on Thursday, four council areas in north Wales - Conwy, Denbighshire, Flintshire, and Wrexham - will face the same restrictions as those in place in most of south Wales

* New restrictions are now in force in Neath Port Talbot, Torfaen and Vale of Glamorgan

* People should not enter or leave those areas without a reasonable excuse like going to work, unless you can do so from home, or school

* Currently all parts of Northern Ireland have the same rules

Further details on the measures in place and specific areas affected have been published by the governments for England, Scotland, Wales and Northern Ireland.

How many people are under extra restrictions?

In total, at least 16.6 million people are in local lockdowns in the UK - about one in four people.

Currently, 65% of northern England faces restrictions and 22% of the Midlands.

When are new restrictions introduced in an area?

There is no set level of infection that triggers this in a particular place, but if it posts more than 40 coronavirus cases per 100,000 people, it is likely that extra restrictions will be considered.

The number of infections is not the only factor considered.

For example, cases in Northampton jumped to 125 per 100,000 in August. But as the rise was almost entirely down to workers at a local factory no restrictions were introduced.

What are 'areas of concern'?

Since June, Public Health England has been publishing a weekly Covid-19 surveillance list.

This lists those local authority areas where incidence of the disease is rising, sorting them into three categories:

* Areas of intervention - where restrictions or lockdowns are in place
* Areas of enhanced support - where the local council is receiving help from the government (eg extra testing)
* Areas of concern - where the situation is being monitored closely, but no restrictions have been put in place

On 25 September, all 33 London boroughs were listed as areas of concern.

How are these rules enforced?

Local authorities in England have powers to:

* Close specific premises (such as shops, cafes and gyms)

* Shut outdoor spaces (such as parks, playgrounds and beaches)

* Cancel events (such as concerts, weddings and sporting events)

* Close sectors or types of premises in local areas

* Reduce the maximum size of gatherings

* Restrict the use of transport 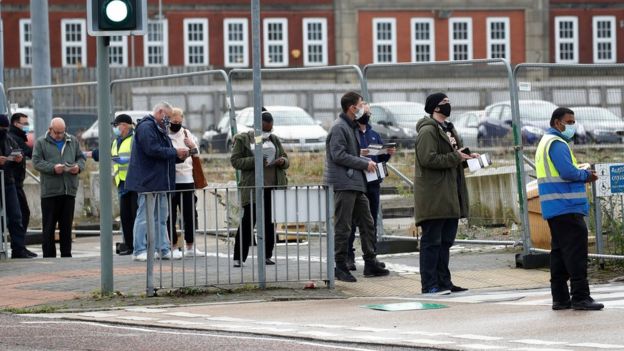 Bolton has the highest case rate in the country, the health secretary says

Can police enforce the rules?

Police have powers to make sure people stick to the restrictions. For example, if they believe that somebody is staying away overnight, they can tell them to return home.

They can also fine people for breaking the rules, and may issue a "prohibition notice" directing somebody not to do something.

But if a resident from a locked-down area wants to go to a bar in another part of the city, for example, there is nothing legally to stop them.