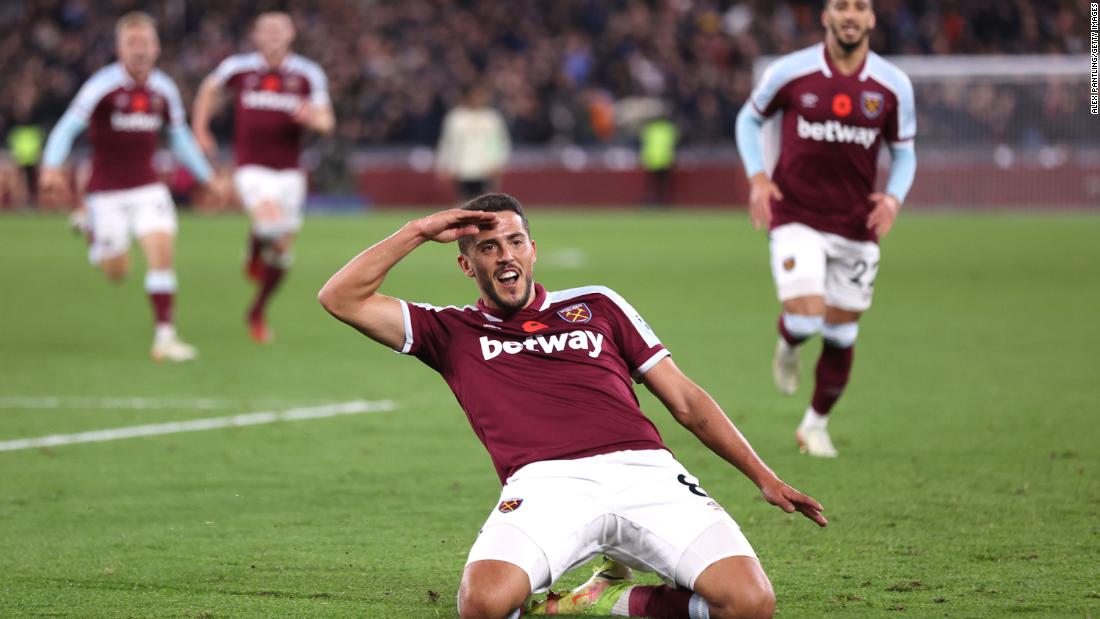 Do not scratch your eyes West Ham fans, this is really happening.

Granted it is just 11 games into the season, but Hammers supporters will wake this morning to see their side third in the Premier League table -- just three points off the top-spot having leapfrogged Liverpool with a thrilling 3-2 victory on Sunday.

Flexing genuine top four credentials in the league, poised to fly through as group winners in the Europa League and preparing for a quarterfinal EFL Cup clash with arch-rivals Tottenham Hotspur in December -- seasoned supporters could be forgiven for assuming this whole campaign has been wickedly constructed as some cruel mirage.

The London Stadium -- so often a mire of antipathy and gloom since the club's emotional departure from their spiritual home of Upton Park in 2016 -- this season buzzes with pride over a team brimming with confidence, a redemption arc embodied by manager David Moyes.

Having taken over a side battling relegation in December 2019, Moyes has turned West Ham into an intimidating team characterized by dogged defensive effort and swift counter-attacking threat. 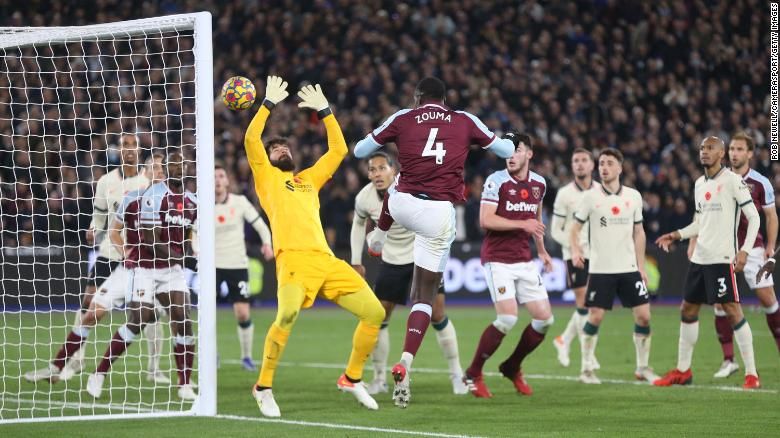 Kurt Zouma makes it 3-1 with a towering header.

Sunday's victory over Liverpool, who arrived in East London looking to extend a 25-game unbeaten run in all competitions, epitomized this new-era West Ham.

The home side took the lead just four minutes in when Alisson failed to deal with Pablo Fornals' swinging corner, the ball flicking off the Brazilian goalkeeper for an own-goal.

Liverpool's goalkeeper was adamant he had been impeded by West Ham defender Angelo Ogbonna, but the goal was given following video assistant referee (VAR) checks for a possible foul and handball.

VAR was soon called upon again following Aaron Cresswell's strong tackle on Jordan Henderson -- the West Ham fullback catching his compatriot high on the follow-through -- but the Hammers survived another check to avoid a red card.

'It makes no sense'

"I accept we're not too good to lose football games. Today, we lost it, that's not nice but I accept it. But when we speak about situations in a game, you just need normal decisions from a referee. He didn't do that.

"The first goal is a foul on the goalie. The arm goes against Alisson's arm, so how can he catch the ball when someone pulls his arm away? It makes no sense. It's the typical excuse that VAR says it's not clear and obvious, but then what do you need?

"Cresswell? For me, it's a reckless challenge. Even though he touches the ball, you can't go in like that as anything can happen. You can say he touched the ball, but you have to control your body," Klopp added.

Liverpool drew level just before halftime courtesy of a moment of genius from Trent Alexander-Arnold, the right-back curling Mohammed Salah's short lay off into the top corner with goalkeeper Lukasz Fabianski rooted. 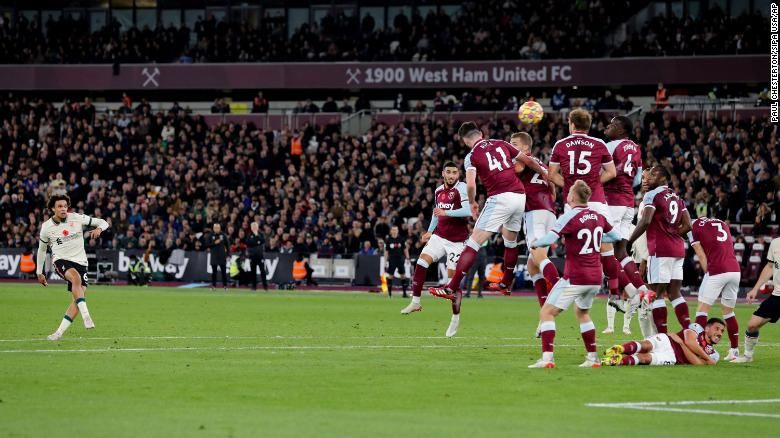 Alexander-Arnold levels with a stunning effort.

West Ham restored their advantage midway through the second half with a devastating counter. Exchanging passes with Jarrod Bowen, Fornals struck low under Alisson to spark jubilant scenes at the London Stadium.

The euphoria was heightened just minutes later when Kurt Zouma, signed from London rivals Chelsea in the summer, rose highest at the back post to head home his first goal for the club.

Liverpool will rue another goal conceded from a set-piece that ultimately cost them the game, as Divock Origi's goal seven minutes from time was unable to spark a dramatic comeback as West Ham held their nerve to see out the victory.

The win sends the Hammers a point above Liverpool into third, level with Manchester City on 23 points and just three points behind league leaders Chelsea, who they host at the London Stadium on December 4.

It is their fourth straight victory since a shock defeat at home to newly promoted Brentford, but Moyes is determined to keep his players grounded.

"I want us to challenge whichever teams are in the top four, I have laid that down to the players," Moyes said after the game.

"I don't know who they're going to be, I hope one of them could be us, but at the moment, others have been there before us."

Naturally then, Moyes played down any talk of a title challenge.

"I want to be really positive all the time, I would like to say that is what we can do, but I don't see that at the moment."

"We missed out on Champions League football by two points -- so why can we not be there?

"We are not getting carried away, but it is feeling good at the moment."