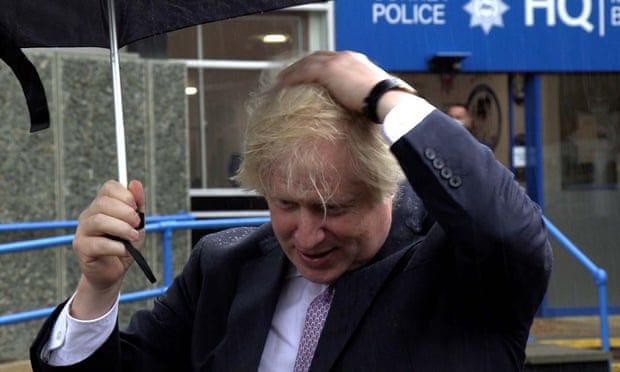 PM’s attempt to grip agenda flounders amid criticism he has ignored evidence on stop-and-search
Police chiefs have condemned Boris Johnson’s high-profile strategy to tackle crime as “weird and gimmicky”, while plans to increase stop-and-search were criticised for ignoring the evidence.

The crime initiative was supposed to show the Johnson government gripping the agenda. But senior police officers, the rank and file, opposition politicians and even some in business rebuked it.

The criticism of Johnson’s crime plan is the latest in a series of setbacks for the prime minister’s domestic relaunch, after his landmark “levelling up” speech was mocked for being light on detail and his plan to overhaul social care delayed by Treasury wrangling and a Conservative backlash over tax rises.

The shadow justice secretary, David Lammy, said the plan was “tinkering” and would do nothing to rebuild a broken system. “It is just a rehash of policies that won’t make our streets safer or prevent offending,” he said.

“Delays in the courts are at a record high, while convictions for the most serious crimes including rape are at a record low. The government’s tinkering proposals do little to reverse the effects of the closure of 295 courts in England and Wales, or to deal with the massive cuts to drug treatment services, the police, the CPS and the whole justice system his government has made since 2010.”

Among the proposals in the strategy are:

* Permanently relaxing conditions on the use of section 60 stop-and-search powers for police to tackle knife crime.

* Expanding the use of electronic monitoring for thieves upon release from prison.

* Trialling the use of alcohol tags – which detect alcohol in the sweat of offenders guilty of drink-fuelled crime – on prison leavers in Wales.

Under the plans, offenders doing community service would wear hi-vis as they clear canals or clean graffiti. “The intention is to make the price of crime visible,” one Home Office source said.

Some police chiefs privately mocked parts of the government plans, which the Guardian understands were launched without consulting leaders in law enforcement or frontline officers.

One chief constable condemned a plan for league tables measuring how quickly forces answer emergency and non-emergency calls: “So forces can answer the phone, say ‘hello’, and put it down again. It needs to be about the quality of what you do.”

Another chief constable said: “Its a real over-50s assumption that picking up the phone is an indicator of effectiveness.

“It is about what you do after you answer the call. Some mental health calls take two hours.”

One chief said of the overall package: “It is just weird … and a bit gimmicky. Why tag burglars on release from prison, and not domestic violence offenders, or rape suspects?”

Asked if it would cut crime, the chief said: “No, but it will waste some officers’ time. It does not address the big issues.”

Those issues identified by police leaders include poverty and social inequality that have widened in recent years, as well as changing dynamics in drugs markets.

Another police leader said of the measures, some of which were recycled from past announcements: “It is like there has been an explosion in a strategy factory.”

Johnson, out selling the plans, claimed “fluorescent-jacketed chain gangs” of offenders would be visible to the public, paying for their crimes.

That was rubbished by James Timpson, of the shoe repair business, which funds recruiting and training for ex-offenders, who said on Twitter: “Instead of making offenders wear hi-vis jackets in chain gangs, how about helping them get a real job instead? In my shops we employ lots of ex-offenders and they wear a shirt and tie. Same people, different approach, a much better outcome.”

A planned relaxation of rules governing the use of stop-and-search without an officer needing reasonable suspicion was described by Johnson as a “loving” thing to do: “I think that giving the police the backing that they need in law to stop someone, to search them, to relieve them of a dangerous weapon, I don’t think that’s strong-arm tactics, I think that’s a kind and a loving thing to do,” he said.

Andy George, president of the National Black Police Association, said: “There is no evidence for the PM’s claims about the effectiveness of stop-and-search, but there is a lot of evidence it is discriminatory, unfair and does not prevent the long-term scourge of violent crime.

Victor Olisa, former Scotland Yard lead on stop-and-search, said: “Relying on stop-and-search as a key crime reduction tactic suggests a level of desperation in this government’s ideas on stemming the increasing level of violence in our streets.”

Part two of the crime plan sees government promising greater use of special “Nightingale” courts. It comes with the criminal justice system in crisis: courts backlogged with some cases waiting three years, demand on police rising and an expectation violence will increase as lockdown eases and society opens up.

Since becoming PM, Johnson has been keen to repair relations with policing, which fractured during the years of austerity with police officer numbers cut and government denials that helped violent crime rise.

He has promised and is on track to deliver 20,000 more officers within three years, but there are signs relations are fraying.

Police Federation leaders, representing 130,000 rank and file officers, are furious their pay has been frozen, and condemned the crime plan as containing gimmicks and being ill thought out.

Simon Foster, police and crime commissioner for the West Midlands, said: “After a decade of cuts, during which my force has shrunk by a quarter, and community policing has been dismantled, it is the height of hypocrisy for the government to talk about wanting communities to have named police officers who they can get in touch with.”
#Boris Johnson  #Johnson
Add Comment