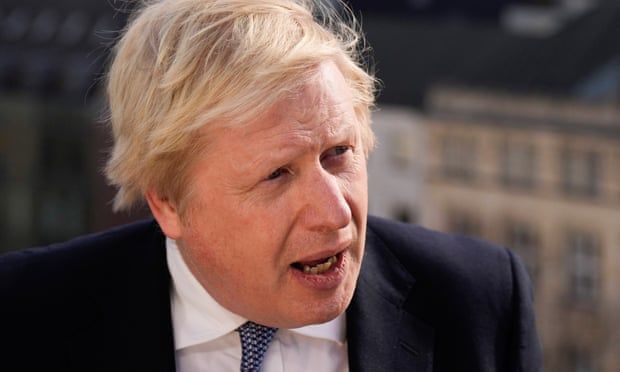 ‘We’re in a different world’: PM defends end of Covid rules in England

The country is “in a different world” from when the Covid pandemic started, Boris Johnson has said, meaning the last remaining restrictions can begin to be lifted from next week.

Ahead of an announcement on Monday about the government’s “living with Covid” strategy, the prime minister signalled free mass testing would end imminently and told people to return to the office and “get their confidence back”.

Concerns have been raised by some scientists and health experts about the mooted plans to drop the legal requirement for people to self-isolate, scrap the majority of free lateral flow tests and end most contact tracing. 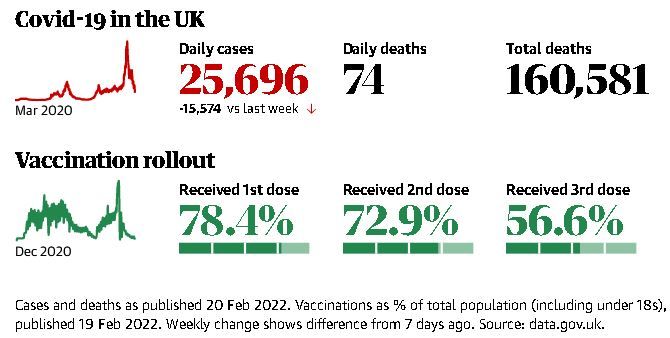 Labour has also argued the move is premature, and accused ministers of wanting to “declare victory before the war is over”.

But Johnson was bullish about the prospects of returning most freedoms to their pre-Covid frontiers. Speaking to the BBC’s Sunday Morning programme, he said “now is the time” to press ahead with reining in public spending and ending restrictions.

“I think it’s very important we should remain careful,” Johnson said. “We’re certainly not asking people to throw caution to the winds. Covid remains a dangerous disease, particularly if you haven’t been vaccinated and if you’re vulnerable.

Johnson said testing would happen “at a much lower level” as it was unsustainable to continue spending £2bn a month on the scheme.

He added: “We’re in a different world. I think it is it is important that people should feel confident again and people should feel able to go back to work in the normal way. I do want to see our country really getting back on its feet … Now’s the moment for everybody to get their confidence back.”

Johnson did not rule out restrictions being re-imposed. He said: “I don’t want to go back to that kind of non-pharmaceutical intervention. I want to be able to address the problems of the pandemic with a vaccine-led approach … but I’m afraid you’ve got to be humble in the face of nature.”

Wes Streeting, Labour’s shadow health secretary, told the same programme that the move “seems very premature” and used the analogy of a football team being one goal ahead and then taking off their best defender in the closing minutes of the game.

“I’m not clear that the scientific advice supports this,” he said, adding that he stood with those groups who had raised concerns, such as the NHS Confederation, World Health Organization and British Medical Association, “any day of the week and twice on Sunday”.

“At this stage, it’s not the right thing to do,” Streeting added.

He accused the government of “glaring inconsistencies” in its approach to relaxing restrictions and trying to distract attention from Scotland Yard’s investigation into a dozen alleged parties in breach of Covid rules, some of which were attended by Johnson.

Streeting said it did not make sense for the prime minister to still be advising people to stay at home – even if it was not mandated – without continuing the support payments for low-income workers and free testing.

“It does seem to me that the whole decision making process in No 10 at the moment is being driven by the prime minister’s political weakness, not by public health, and that should concern all of us,” he added.

Johnson is expected to call a cabinet meeting on Monday at which the plan for lifting Covid rules will be signed off before a likely announcement in the House of Commons.