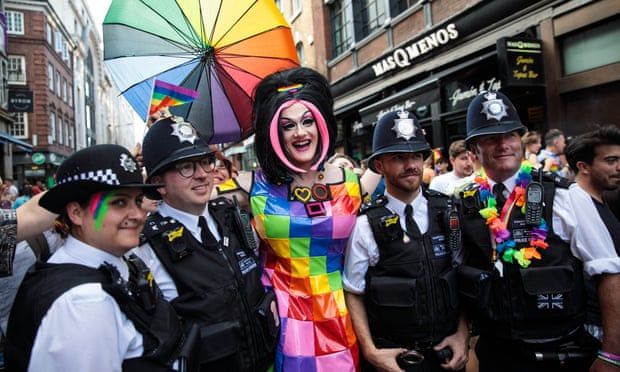 Uniformed police not welcome at Pride in London, say organisers

Peter Tatchell says officers are welcome to join as civilians but the Met needs to be challenged over homophobia
Pride in London says uniformed officers should not march in the parade, following calls from LGBTQ+ campaigners to bar them due to Scotland Yard’s “homophobic” handling of the investigation into the serial killer Stephen Port.

The move came after the human rights campaigner Peter Tatchell said the case, which the independent police watchdog recently announced it was reinvestigating, showed that “institutional homophobia is alive and kicking in the Metropolitan police”.

Tatchell added that the case, as well as other recent revelations of homophobia, racism and misogyny in the force, meant Pride in London needed to take a stand on police officers’ participation in the parade.

He said if the Met police had conducted a proper investigation after the murder of Port’s first victim, Anthony Walgate, the three other young gay men Port subsequently killed would still be alive.

Officers failed to link the deaths between June 2014 and September 2015, despite striking similarities and the fact that three of the men were found in St Margaret’s churchyard, Barking, yards from Port’s home, while the fourth was found outside his flat.

Tatchell said: “While there are many good officers, and they are welcome to march in civilian clothes, Pride needs to challenge the police as an institution, otherwise they will never reform.”

In a statement, Pride in London said: “We work hard to strike a balance between the very real and legitimate concerns from members of our community, and being as welcoming as we can. We agree that the police uniform undermines that balance, and as such we are aligned that it should not feature in our parade.”

The Gay Liberation Front, which organised the first Pride march in 1972, has also signed an open letter calling for an end to not only police taking part in the parade but also patrolling the march.

The letter, organised by Lesbians and Gays Support the Migrants, states: “The organised presence of police at Pride en masse provides a platform to an institution that represses us. Having a police presence at Pride as well as patrolling Pride, makes Pride unsafe for our community.”

The letter and Tatchell also called for Pride in London to ban the Home Office over the deportation of LGBTQ+ asylum seekers, and fossil fuel companies for exacerbating the climate crisis.

“Their participation in Pride today is wholly inconsistent with the original liberation ethos of the first Pride in 1972,” said Tatchell.

Last year Pride in London voted against a motion to ban the Met LGBT+ Network from taking part in the annual parade following pleas from the then commissioner, Cressida Dick, to allow her officers to be able to march.

This came after the organisation received hundreds of letters in response to a Twitter campaign highlighting examples of perceived institutional racism within the Met.

Its community advisory board sought feedback from different groups over a number of weeks and recommended in a report that the police not be allowed to march as a group in the parade. The report noted that, while every LGBT person had a right to take part in the parade, not every organisation shared that right.

Similar demands have been made of other Pride events across the world, with Toronto Pride banning uniformed officers from taking part in the parade in 2019.

Tatchell’s comments came as he prepared to retrace the route of the first UK Pride march in London, from Trafalgar Square to Hyde Park, in an event to celebrate its 50th anniversary on 1 July.

The campaigner, who was also one of the organisers of the 1972 march, said Friday’s event was also “an attempt to reclaim the radical roots of Pride, which was both a celebration and a protest”.

“Back in 1972, we would have never accepted the police marching in the parade, because they were witch-hunting us,” he said.

The programme for the 1972 march began by listing recent prosecutions of several gay men for sex in public toilets, known as cottaging, having been arrested by “plainclothes pigs”.

Tatchell recalled how the police presence on that first march from Trafalgar Square to Hyde Park was “unnecessarily large for a peaceful protest”.

“At some points, there was almost one officer for every marcher. Some of the police shoved us and a few made homophobic remarks. We carried on defiantly.”

Later that day when marchers arrived at Hyde Park and held a picnic, called a Gay Day, Tatchell said police watched them same-sex kissing, which was then an arrestable offence. “They didn’t dare arrest us because we were so many.”

A spokesperson for the National Police Chiefs’ Council said: “Taking part in Pride is important for LGBTQ+ colleagues within policing. It allows LGBTQ+ people to see that they are represented in the police service and it is an excellent public engagement opportunity where we can promote safety messages, understand community concerns and recruit from diverse communities.”