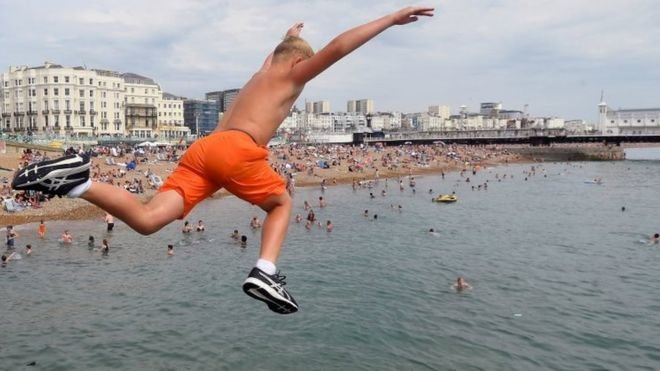 The UK's coastguard has issued a new warning urging people to be careful in the sea, after recording its highest number of call-outs in a single day for more than four years.

Its teams dealt with 340 incidents and rescued 146 people on Saturday.

Saturday was the second day of a mini-heatwave for parts of the UK, with temperatures hitting 34.5C (94.1F).

The latest figures come just over a week after the coastguard reported its previous record of 329 incidents.

HM Coastguard's head of coastguard operations, Richard Hackwell, said there had been "a big rise" in incidents this weekend "as more people visit coastal areas and head to the beach".

"We understand that people want to have fun at the coast and enjoy the heatwave but we urge everyone to respect the sea and take responsibility in helping to ensure the safety of themselves, friends and family," he said.

Separately, the RNLI called for people to wear life jackets if going out on the sea, after a number of kayakers needed rescuing off the Devon coast on Sunday.

The warnings came on another sweltering day for many Britons on Sunday, with a high of 34C recorded in East Sussex, according to BBC Weather.

There will also be little relief from the warm weather overnight, particularly in south-east England, where some face a so-called tropical night - when temperatures stay above 20C. 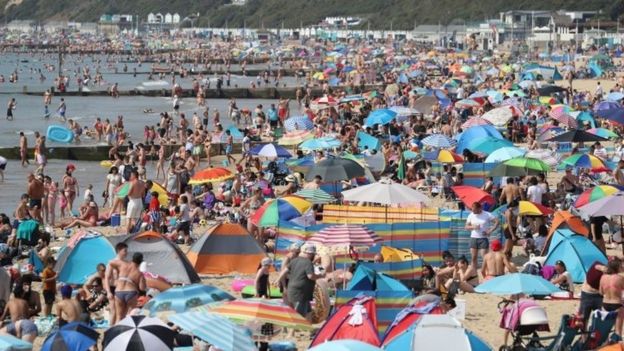 There were large crowds at Bournemouth beach in Dorset on Sunday, despite warnings to avoid busy areas

Crowds packed out beaches along the coast for the third day in a row on Sunday as the hot weather continued.

And Dorset Council urged people to avoid Lulworth and Durdle Door by midday due to large numbers in the area.

Some seafront car parks in Dorset were full by mid-afternoon, and Bournemouth, Christchurch and Poole Council warned beachgoers - via a new mobile app - of congestion on much of its 24 beaches.

Meanwhile, a woman has died following a collision between a water bike and a boat off Anglesey, in Wales.

The coastguard co-ordinated search and rescue responses to a wide range of incidents on Saturday, including people being cut off by the tide and children swept out to sea on inflatables.

Saturday's incident count represents a "significant" 145% increase compared to the average number of call-outs recorded throughout August 2019, the coastguard said in a statement.

Mr Hackwell stressed that beachgoers should "check and double check tide times as even the most experienced swimmer or keen watersports enthusiast can get caught out by currents and tides".

And he encouraged people to plan their days out, "always exercise caution" and to make sure they have a way of contacting the coastguard if they get into trouble. 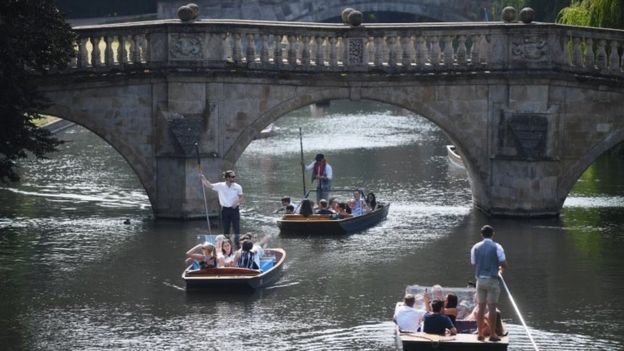 The hot weather is likely to continue into next week, with humid nights, according to BBC Weather.

Forecasters have predicted "oppressive" highs of 34C in the south-east during the day on Monday, with sunny spells expected elsewhere in the UK.

However, there is a growing risk of thunderstorms. There is a chance of sharp showers that could turn thundery for some areas in western England and Wales on Monday.

Yellow thunderstorm warnings have been issued for all parts of the UK for Monday through to Thursday, with the Met Office stating "not everywhere will see them, but where they do occur they could be significant and disruptive".

Large parts of England and Wales have been warned there may be torrential rain, large hail, frequent lightning and strong gusty winds.

Downpours could see rainfall of 20-30mm in an hour, with some locations potentially receiving 40-60mm in three hours. These would be fairly isolated instances, according to the Met Office.

Friday saw the hottest August day in 17 years, with the mercury hitting 36.4C at London's Heathrow Airport and Kew Gardens.

Last week, the Met Office warned that climate change driven by industrial society is having an increasing impact on the UK's weather.

Its annual UK report confirmed that 2019 was the 12th warmest year in a series from 1884, and described the year as remarkable for high temperature records in the UK.