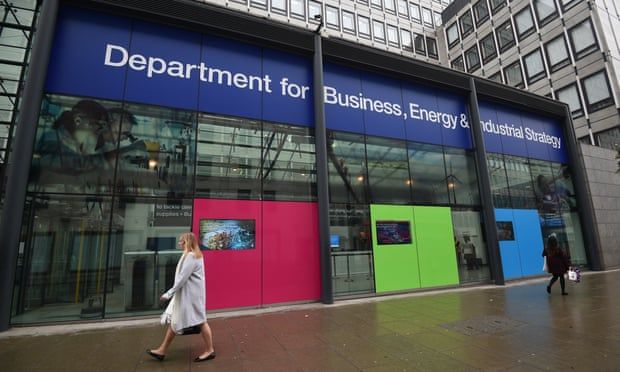 Of the total flights taken – which are single journeys and do not include travel to Northern Ireland – by the Department for Business, Energy and Industrial Strategy (BEIS), 34 of them were by government ministers.

The BEIS figures come from a freedom of information request by the office of Kerry McCarthy, the Labour MP for Bristol East and shadow minister for green transport. They show that in the six months after the 2050 net zero target was signed into law on 27 June 2019, the department took 395 domestic flights, while in 2020 the figure was 210. So far this year, the department has taken seven domestic flights.

In the six months before the law was signed, in the first two quarters of 2019, there were 779 domestic flights taken by the department.

It comes after the Cop26 president, Alok Sharma, was accused by opposition parties of undermining environmental efforts and failing to set an example after reports he had flown to 30 countries in the past seven months.

Downing Street said that in order to “cut emissions and secure ambitious action ahead of the Cop26 summit” face-to-face talks were essential. They insisted Sharma had secured “ambitious action as a result of the discussions he has had”.

The UK is preparing to host vital UN climate talks in Glasgow in October and November, when for the first time since the 2015 Paris climate change conference countries will set new targets to cut greenhouse gas emissions.

McCarthy said as mainland UK journeys, the flights could have been replaced by train journeys.

“The government’s hypocrisy on climate change is breathtaking. Since the UK’s net zero emissions target became law, the very department responsible for climate change has taken hundreds of polluting domestic flights that could have been taken by train,” she said.

“To make things worse, this government has already hiked rail fares and is planning to slash taxes on domestic flights. We desperately need to see climate leadership ahead of Cop26. But if the government isn’t prepared to go green, how is it going to persuade anyone to do so?”

In March, the government proposed to cut air passenger duty tax on domestic flights, while increasing rail fares by 2.6%, higher than the rate of inflation. A recent survey by the consumer group Which? found train fares on popular UK routes are 50% more expensive than plane fares – even though trains cause 80% less carbon dioxide emissions.

Of the government departments that responded to the FoI request, BEIS’s domestic flights figures for 2019 and 2020 were the highest. So far this year, when numbers were significantly lower, it came in below only the Department of Health and Social Care (DHSC), which recorded eight domestic flights.

A government spokesperson said: “We are committed to getting value for money for the taxpayer by minimising costs and ensuring we use the greenest means of travel wherever possible – and recent figures show that the number of flights taken across government has reduced by 28% since 2010.

“However, ministers and civil servants are often required to travel for government business and while the majority of journeys are by train, flights are sometimes necessary.

“For example, for the case of BEIS, travel will include to offices in Aberdeen and to key parts of the energy sector in Scotland – much of which cannot be travelled to and from in a day.”
Add Comment