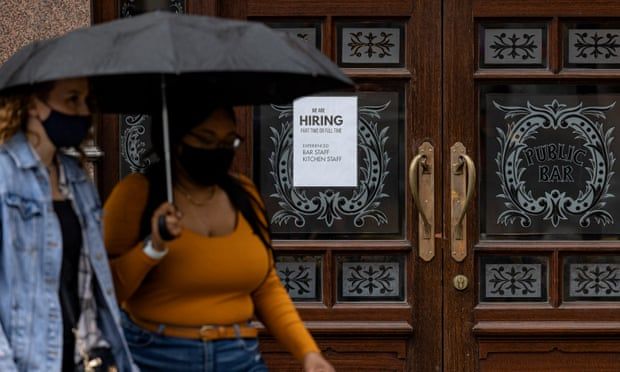 Hotels, pubs and restaurants among those with biggest problems recruiting staff

Employers scrambling to hire staff amid widespread labour shortages after lockdown helped to return the number of workers on company payrolls to pre-pandemic levels in August, official figures show.

The Office for National Statistics said the number of payroll employees increased by 241,000 to 29.1 million in August, lifting employment in all regions of the UK to pre-Covid levels except in London, Scotland and south-east England.

It came as the number of job vacancies soared to more than 1m in August for the first time since official records began in 2001, rising by 35% in the space of three months across all sectors of the British economy.

Reflecting difficulty hiring staff after lockdown for a wide range of businesses across Britain, the ONS said the largest increase was in accommodation and food services – the sector which includes hotels, pubs and restaurants – with a 75% increase over the past three months. 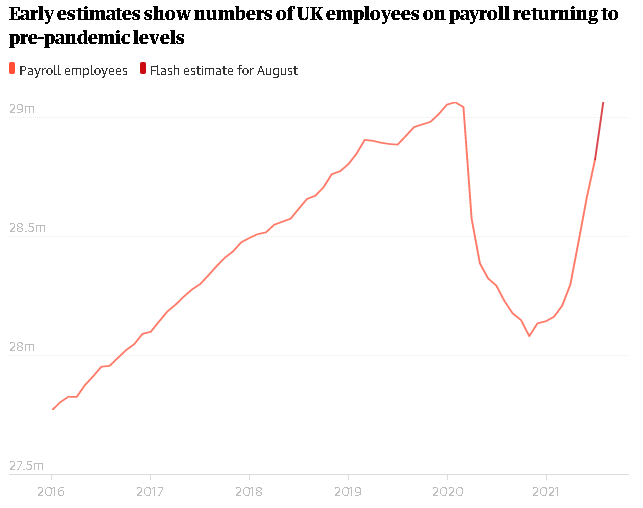 Business leaders have warned that shortages of workers and raw materials will hold back Britain’s economic recovery from the pandemic, with lobby groups calling for looser post-Brexit migration rules to enable firms to hire more staff from the EU.

The number of EU nationals working in Britain has dropped during the pandemic as many workers returned to their home countries, while ongoing concerns around Covid, pandemic restrictions, and post-Brexit migration rules have limited their return.

Despite the rise in the number of payrolled employees in August, which is collected from HMRC data, the ONS said employment in the UK still remained below pre-Covid levels in official data gathered in its labour force survey in the three months to July. 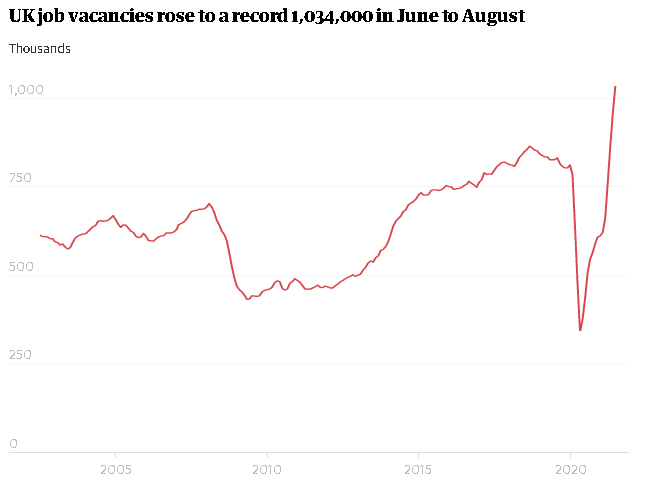 Employment, which measures the proportion of people aged 16 to 64 in work, rose steadily to 75.2% in the three months to the end of July, but remains 1.3 percentage points lower than pre-Covid levels.

The official headline rates differ from the HMRC payroll numbers because they are based on surveys rather than company filings and cover a three-month period. The HMRC figures also exclude self-employment and may double count some workers who have more than one job.

About 1.6m jobs were still furloughed at the end of July, according to the latest data published by HMRC last week, with the highest numbers in sectors of the economy where pandemic restrictions are toughest. More than half of the total workforce in air passenger transport remains on furlough, while there are also large numbers in the arts and leisure industries.

Nye Cominetti, the senior economist at the Resolution Foundation, said self-employment remains 700,000 down on pre-Covid levels, adding that as many as 1 million employees could still be on furlough when the scheme closes at the end of this month.

“There is still ground to make up in the labour market. With the furlough scheme ending in little over two weeks’ time, we should expect a fresh rise in unemployment this autumn, particularly among furloughed staff that aren’t able to return to their previous jobs,” he said.

Some economists said the economy appeared to be well prepared for the end of furlough, suggesting that record job vacancies could help to prevent a sharp rise in unemployment.

Grant Fitzner, the chief economist at the ONS, said government data from the Insolvency Service suggested there was little evidence to suggest there would be a sharp rise in redundancies when the scheme ends. Employers must report plans to dismiss 20 or more staff as redundant within a period of 90 days.

“I wouldn’t say there won’t be some people losing jobs, but it’s safe to say ‘so far so good’,” he said.

However, others warned that mismatches between the areas where workers are losing their jobs and those where there are record vacancies would cause issues. Yael Selfin, the chief economist at KPMG UK, said there was likely to be “more pain to come” once furlough ends, and as firms struggle to hire staff.

“While the pressure should ease as more people look to return to work and the furlough scheme ends, the UK labour market is set to remain choppy with vacancies taking time to fill due to skills shortages and reduced availability of overseas workers,” she said.

Rishi Sunak, the chancellor, said the latest figures showed the government’s plan for jobs was working, with unemployment falling for seven months in a row. “As we continue to recover from the pandemic, our focus remains on creating opportunities and supporting people’s jobs,” he added.