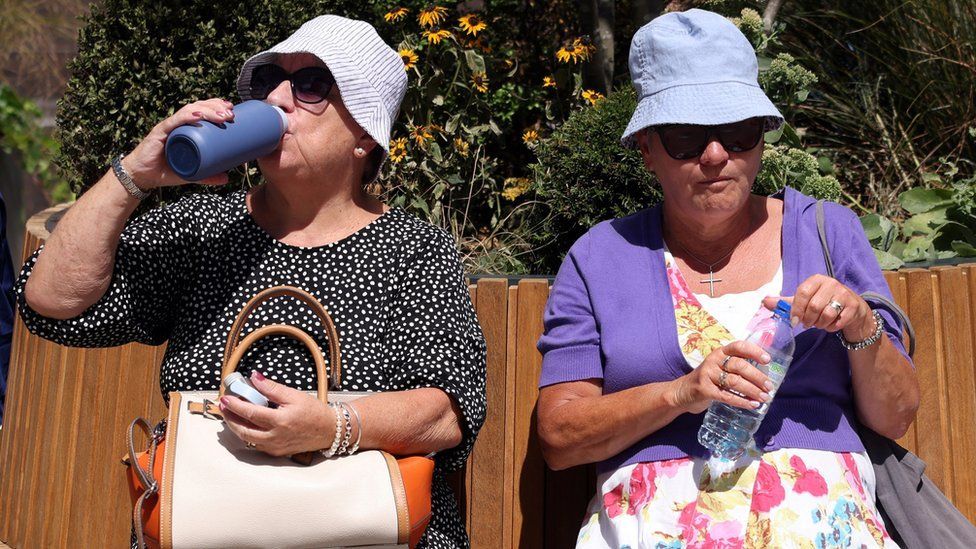 Extra measures are being put in place for ambulance services as the UK heatwave approaches, says Health Secretary Steve Barclay.

More call handlers and extra capacity for the 111 helpline are among the steps planned for Monday and Tuesday.

He urged the public to look out for vulnerable relatives and neighbours.

That would be the highest temperature ever recorded in the UK - above the current high of 38.7C in Cambridge in 2019.

Mr Barclay said: "The clear message to the public is to take sensible steps in terms of water, shade and cover. That's the best way of mitigating against the heat.

"We're asking people to keep an eye out for their neighbours and those who may be vulnerable."

On Saturday, temperatures reached 29.1C in Kew Gardens in west London, and Heathrow Airport, with highs of 31C expected in central England on Sunday.

In east Kent, hundreds of people were left with either no water or low pressure on Saturday after a power failure on Friday evening.

The extra support for health services also includes extra ambulance capacity, and freeing up space in hospitals so patients are not stuck in ambulances outside, said Mr Barclay.

NHS leaders have warned there could be greater demand for ambulances - and said patients should not be left outside hospitals in hot weather for more than 30 minutes.

The new health secretary was speaking after an emergency Cobra meeting held by the government on Saturday.

Cabinet Office Minister Kit Malthouse, who chaired it, warned of significant disruption to transport and urged people not to travel unless necessary.

"The heat will affect rails, for example, so the trains have to run slower," he said, adding: "If they don't have to travel, this may be a moment to work from home."

Schools are being given help and guidance to enable them to stay open, Mr Malthouse said.

Meanwhile, Labour criticised the prime minister after he reportedly did not attend the meeting.

"In these exceptionally high temperatures everybody can be affected," said Prof Isabel Oliver, its chief scientific officer.

"Last year we didn't reach temperatures anywhere near the ones that are predicted for next week, [and] we saw over 1,600 excess deaths associated with the period of heatwave. So this is why we are keen that everybody knows what they can do to stay safe."

The Met Office red warning - the highest level - is for extreme heat and covers an area including London, Manchester and York on Monday and Tuesday.

It is the first time it has been issued since the warning system for heat started last year.

Rail passengers in England and Wales have been warned they should only travel if necessary, and Network Rail said speed restrictions were likely.

Some schools will also close early next week and some hospital appointments will be cancelled.

The rest of England, Wales and southern Scotland will be under an amber warning for extreme heat - while in Europe, deadly wildfires have broken out in Portugal, Spain and southwestern France. 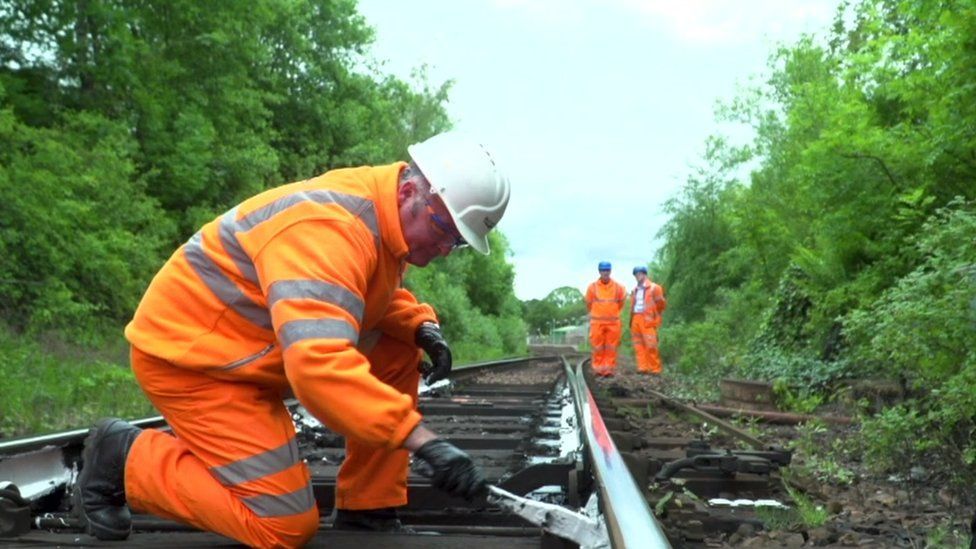 She said there was an 80% chance the UK would break its current highest temperature record. Temperatures could reach as high as 41C in England on Monday, with 38C quite widely across England and Wales.

Tuesday is set to see highs of 40C, or above, in eastern England. Northern Ireland and Scotland could also see their temperature records broken, she said.

And on top of that, the temperature overnight on Monday into Tuesday could also hit a new peak - with highs of 25C expected.

"The problem is we have a 48 to 72-hour period where people who are vulnerable have no cooling-off period," she said.

As well as the Met Office warning, the UKHSA has issued its highest level four heat alert to health and care bodies - warning illness and death could occur "among the fit and healthy".

Most deaths during a heatwave are usually heart attacks or strokes caused by the strain of trying to keep body temperatures stable.

Rise in deaths can happen quickly

Exposure to extreme temperatures can be fatal.

An unprecedented three-week heatwave in northern France in August 2003 resulted in 15,000 excess deaths - those are deaths from all causes that occur above and beyond those expected under "normal" conditions.

The vast majority of the deaths were among older people, aged 65 and above.

In England during the same period, there were more than 2,000 excess deaths, compared to the previous five years.

The rise in mortality due to hot weather can happen very quickly, usually within the first couple of days of the temperature rising.

So the Met Office red heat warning and the UK Health Security Agency's level four health alert are like warning klaxons for the government, health service and individuals to make necessary preparations now in order to mitigate the risks.

The world has already warmed by about 1.1C since the latter half of the 18th century, and experts predict that temperatures will keep rising unless governments make steep cuts to emissions.

The hot weather is an "extra burden" for care homes, said Mike Padgham, the chair of the Independent Care Group which represents care providers.

Carers will make sure curtains are drawn, move residents to cooler areas of the home, use water sprays and ensure everyone stays hydrated, he said. 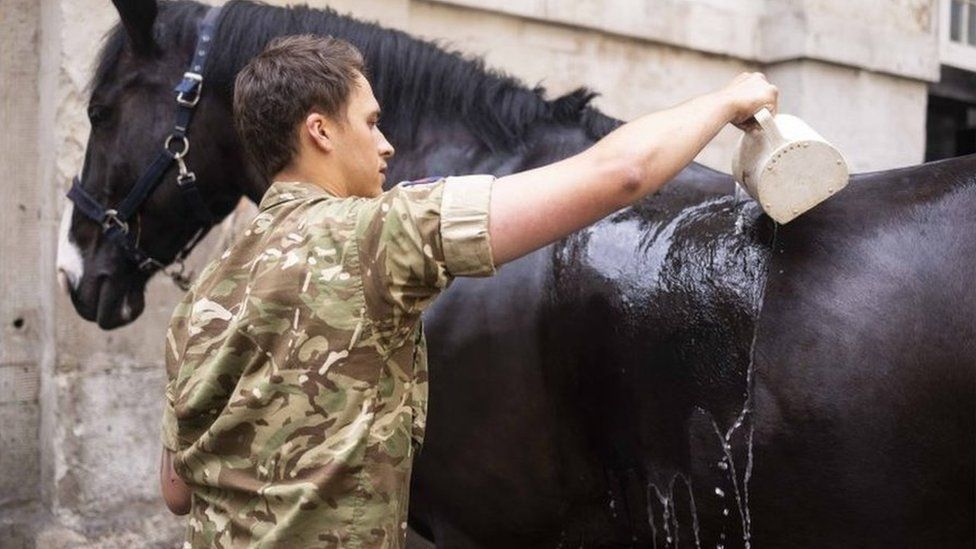 There is concern that the hot weather might also lead to more people getting into difficulty while swimming - after a teenage boy died after getting into the water at a quarry in Lancashire last week.

The Canal and River Trust has launched a safety campaign, asking people not to jump into locks or off bridges.

She said the water may be shallower or deeper than expected or there could be weeds and plants that can tangle around people's limbs.

Meanwhile, firefighters are urging people to swap barbeques for picnics, in a bid to avoid triggering wildfires. 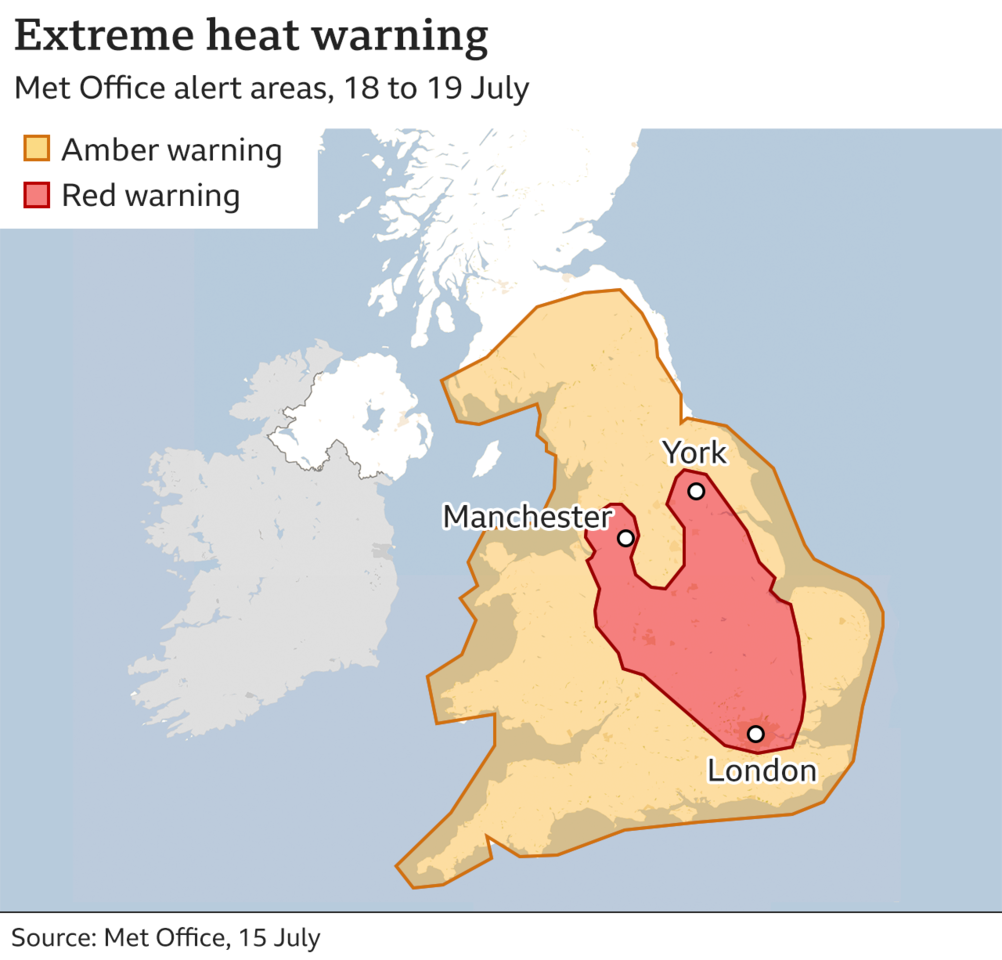