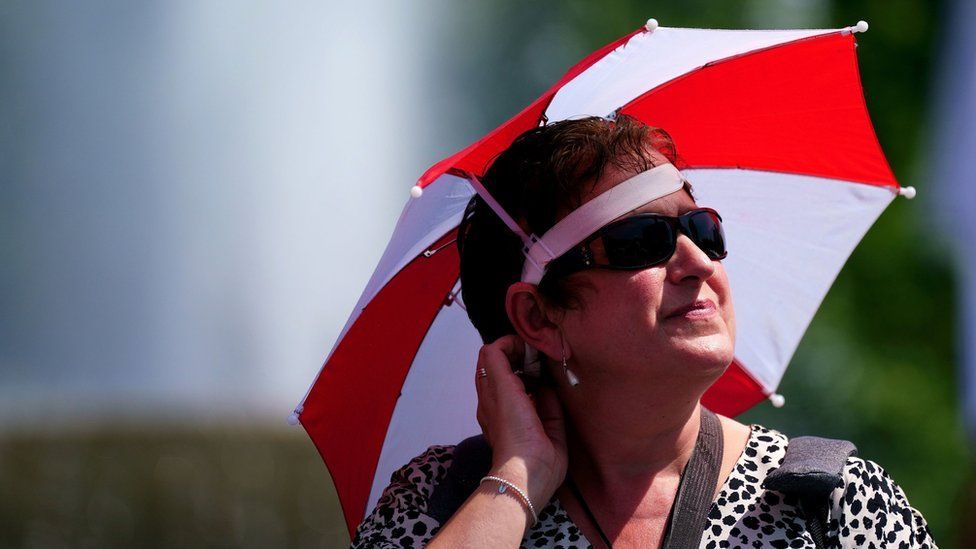 UK heatwave: Amber warning in place as UK has hottest day of the year

An amber warning for extreme heat has begun for England and parts of Wales as the UK braces for record temperatures.

The Met Office warning extends to southern Scotland on Monday and Tuesday, when England's alert rises to red for the first time.

On Sunday, temperatures exceeded 30C (86F) across England and Wales, with a high of 33C in Flintshire making it the UK's hottest day of the year.

The heat could hit 41C on Monday, which would be a record for the UK.

The current temperature record of 38.7C was set in Cambridge in 2019.

On Sunday, Hawarden in Flintshire recorded 33C - making it Wales's hottest day of the year so far, and the hottest for the UK overall.

The highest temperature in England was 32C in Nantwich, Cheshire, with 26.4C at Auchincruive in Ayrshire in Scotland.

Northern Ireland also had its hottest day of the year so far, with 27.7C recorded in Armagh.

Sunday's weather saw packed beaches across the country, with cars queuing for several miles at Camber Sands in East Sussex.

Downing Street said the heatwave was being treated as a national emergency. 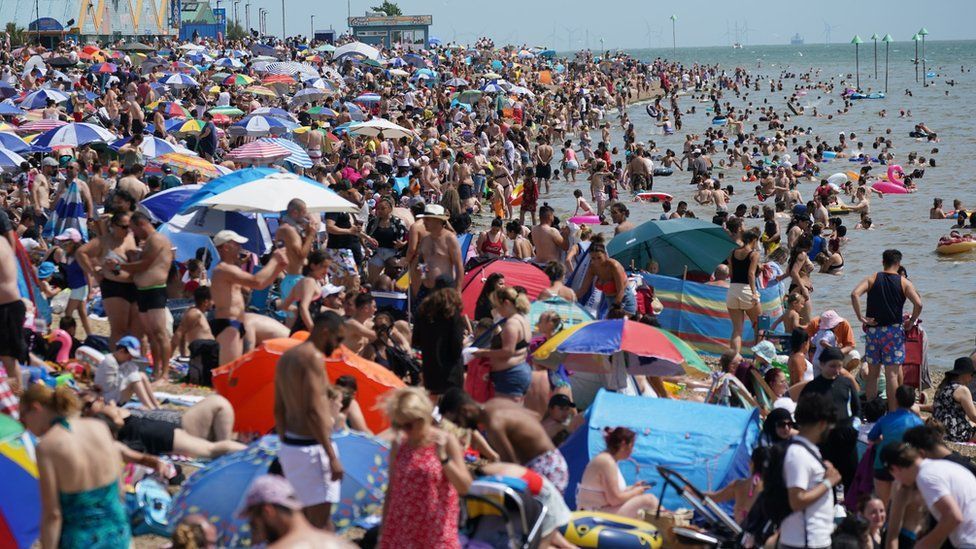 Crowds at Southend beach in Essex on Sunday

But people have been urged to take care near water as they try to cool off.

A teenage boy died after swimming in Salford Quays on Saturday, and a man is missing after entering a reservoir in West Yorkshire.

The Met Office red heat warning for Monday and Tuesday - the highest level - covers an area including London, Manchester and York.

It is the first time it has been issued since the warning system for heat started last year.

The amber warnings in place for those days have been extended and now cover the rest of England, as well as all of Wales and southern Scotland.

An amber warning means health problems are more likely for some; substantial changes are required to work and routines; water safety incidents could increase as people head to the coast, lakes and rivers; and transport delays are possible.

Extra measures are being put in place by the government - more ambulance call handlers and extra capacity for the 111 helpline are planned for Monday and Tuesday.

Network Rail and Transport for London have warned people to travel only if necessary on Monday and Tuesday, and LNER said no trains would run between London and Leeds and York on Tuesday.

People have been asked to look out for vulnerable relatives and neighbours who may be suffering in the heat.

Thomas Waite, deputy chief medical officer for England, said people should keep themselves "well-hydrated over these exceptional couple of days" and seek out cool places.

The chairman of the NHS Confederation has said hospitals will be "really, really pushed" over the coming days. Lord Victor Adebowale told Times Radio the NHS "will cope" but "coping isn't good enough".

The government held an emergency Cobra meeting on Saturday to look at dealing with the heatwave. Labour criticised the prime minister for reportedly not attending, and for his plans to host a private lunch at Chequers on Sunday for some Conservative MPs.

Deputy leader Angela Rayner said Boris Johnson was "preparing to party while Britain boils", accusing him of being "missing in action again". 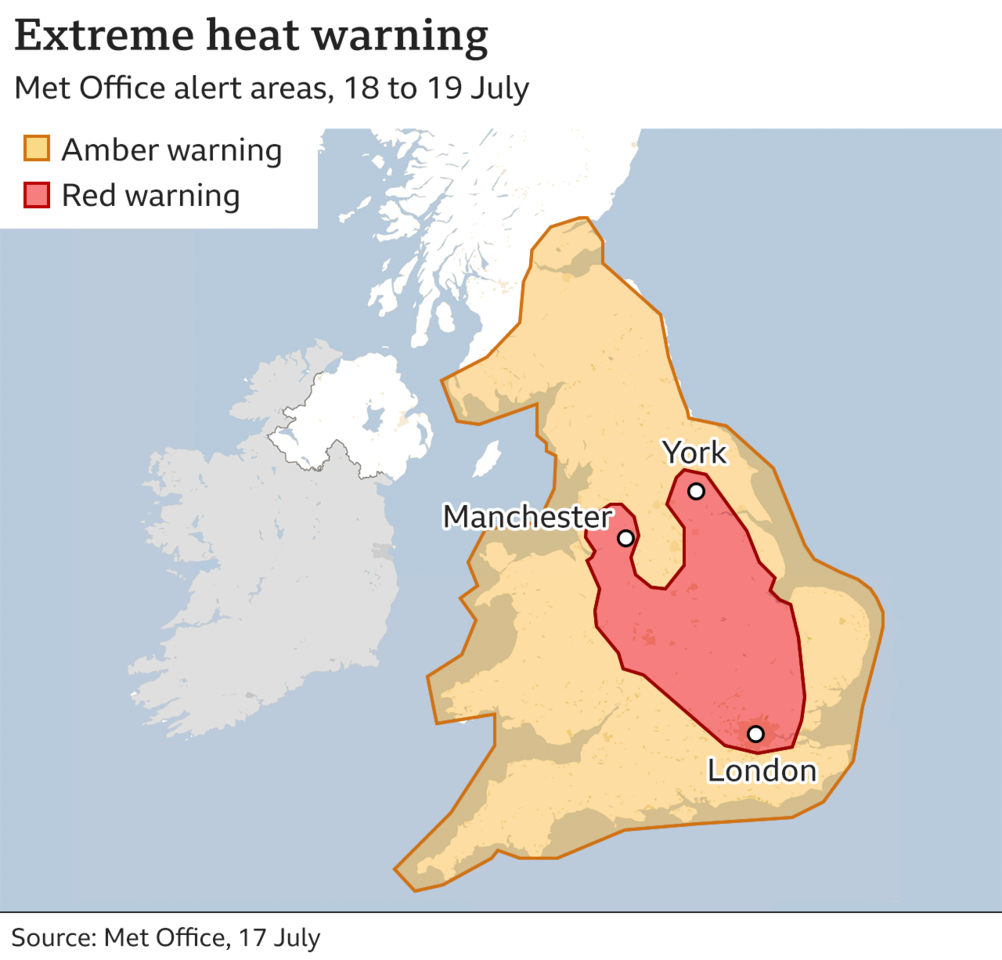 Meanwhile, amid the Tory leadership race, Alok Sharma, president for United Nations climate change summit COP26, said he would not rule out resigning if the prime ministerial candidates were weak on "net zero" - the government's plans to cut climate-damaging carbon emissions.

The five Conservative leadership candidates have expressed varied levels of commitment to the policy.

In an interview with the Observer, Mr Sharma said some of those standing had been "lukewarm" on net zero and that the policy would be essential to prevent "incredible damage" to the country's global standing. 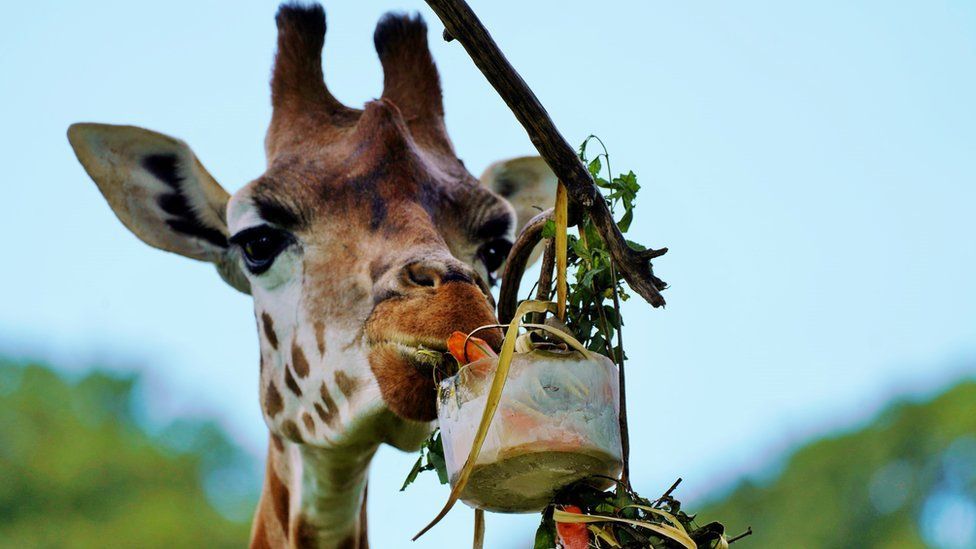 A giraffe enjoys a banana, carrot and willow ice block at Longleat Safari Park in Wiltshire

*  The air conditioning on a children's cancer ward in Cardiff failed

*  Chester Zoo said it would close on Monday and Tuesday for the safety of "staff, visitors, animals and plants"

*  In Europe, deadly wildfires have broken out in Portugal, Spain and southwestern France

She said there was an 80% chance the UK would break its temperature record. Temperatures could reach as high as 41C in England on Monday, with 38C quite widely across England and Wales.

Tuesday is set to see highs of 40C, or above, in eastern England. Northern Ireland and Scotland could also see their temperature records broken, she said.

On top of that, the temperature overnight on Monday into Tuesday could also hit a new peak - with highs of 25C expected.

As well as the Met Office warning, the UK Health Security Agency (UKHSA) has issued its highest level four heat alert to health and care bodies - warning illness and death could occur "among the fit and healthy".

Most deaths during a heatwave are usually heart attacks or strokes caused by the strain of trying to keep body temperatures stable.

Unions have expressed concerns for workers' conditions in sweltering temperatures.

The TUC says businesses should let office staff work from home or adjust their hours to avoid rush-hour travel.

Unite says manual workers are particularly vulnerable: "Employers should consider rescheduling work to cooler times of the day, and provide cooling areas such as shade or air-conditioned rest rooms.

"If workers show any signs of heat exhaustion, the employer should immediately ensure they stop work and are allowed to recover, without loss of pay."

The world has already warmed by about 1.1C since the latter half of the 18th Century, and experts predict that temperatures will keep rising unless governments make steep cuts to emissions.

Susan Powell looks at the extreme temperatures expected across the UK