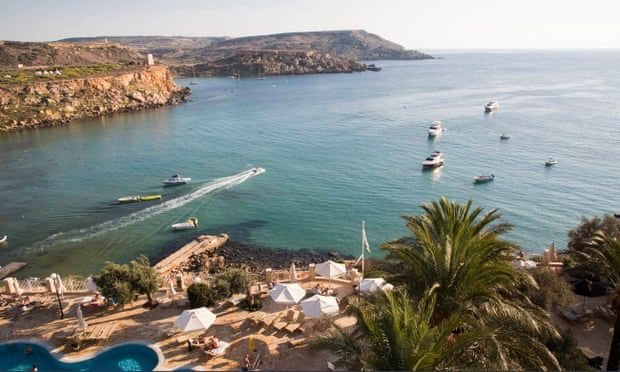 Holiday hopes boosted as quarantine lifted for arrivals from Balearics, Malta and some Caribbean islands

Ministers have sought to rescue the summer holiday season by easing travel restrictions for a number of tourist hotspots, amid a cabinet rift over plans to grant extra freedoms to people who have received both doses of their Covid vaccine.

But Thursday evening’s long-awaited move to scrap self-isolation for Britons returning from certain countries risked being immediately undermined, when some European leaders indicated they would toughen their own border measures to stop the UK’s surge in Delta variant infections in the UK hitting their shores.

Malta is to be added to all UK governments’ green lists from next Wednesday at 4am, and the Balearic islands, Madeira and Israel are being moved from the amber list to the “green watchlist” – meaning they are at risk of returning to amber. In all instances, travellers will not have to quarantine, provided they test negative for Covid before and upon their return home.

A handful of Caribbean nations will also be added to the green watchlist, including Barbados, Bermuda and Grenada, while six countries – including Tunisia, Uganda and Eritrea – are being placed on the red list. This means travel is only allowed for British residents and nationals, who will be forced to pay £1,750 for an 11-night hotel quarantine on their return.

Ministers have also promised that people returning from amber list countries who have had both doses of their Covid vaccine will be able to avoid quarantine later in the summer, instead of having to isolate at home for up to 10 days.

They did not, however, agree a date for the change to come into force, following a showdown at the Covid operations committee on Thursday.

The Guardian understands some cabinet figures are concerned that people will rush to try to bring forward their second doses once they realise it will grant them extra freedoms that would allow them to return home from foreign trips more easily.

Ministers fear this will put strain on supplies just as they are pushing to meet the target of offering all UK adults a first dose by 19 July, the “terminus date” by which Boris Johnson has promised to lift all remaining restrictions. Therefore the easing of restrictions for those returning from amber list countries, including the dropping of official government advice not to travel to them, is not expected to happen until August.

The health secretary, Matt Hancock, who vetoed Malta being added to the green list three weeks ago, is said to be one of the ministers most wary of unlocking international travel, along with the home secretary, Priti Patel, given the importation of the Delta variant from India that was blamed for delaying the final stage of unlocking, originally scheduled for 21 June. 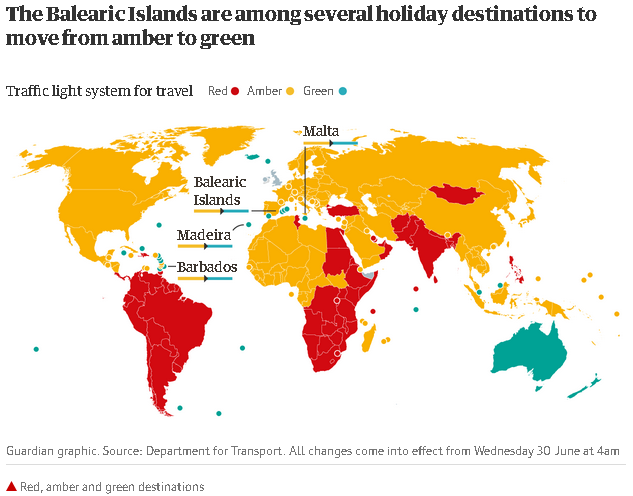 The transport secretary, Grant Shapps, has been under pressure from aviation and tourism companies to add more countries to the green list, and the Cabinet Office minister, Michael Gove, is said to have stopped “gunning” as hard for a more cautious approach to international restrictions.

Meanwhile, Johnson left open the possibility he might take a foreign holiday this summer, saying he had not ruled it out.

The Balearic islands accounted for more than 8% of UK flights to EU countries in the summer of 2019, when almost 1,000 flights a week would depart from the UK, according to data from analysts Cirium.

Next week just 214 are scheduled to fly from the UK to the islands, mainly from Jet 2 and Ryanair, with 32 to Malta and 19 to Madeira, although the number of flights is expected to rise rapidly. EasyJet said it would be adding more services to the Balearics to meet an anticipated surge in demand.

Virgin Atlantic welcomed the addition of Caribbean destinations to the green list but said the announcement did not go far enough, calling for the US to also be added.

The Unite union said that the small changes showed that the system was not fit for purpose, and reiterated calls for help for the beleaguered travel and aviation sector.

The promised opening up came as Covid cases in the UK reached levels not seen since early February, when the country was in lockdown, prompting EU leaders to warn British travellers they could have quarantine restrictions imposed on them when they enter the bloc.

The move would deal a severe blow to those hoping to see family and friends they have been unable to visit since the pandemic began, or planning a getaway in the sun.

On Thursday, 16,703 new infections were reported across the UK, a sharp rise from 16,135 the day before and 11,625 on Tuesday. The steep increase has in part been attributed to surge testing in Scotland, but there was a substantial rise in England, with 13,068 new cases reported on Thursday – up from 12,765 on Wednesday and 9,096 on Tuesday. Figures released by Public Health England on Friday revealed that 99% of new cases in the UK now involve the Delta variant.

The relative lack of vaccination coverage across the EU has led to fears the variant could inflict a heavier death toll in the 27 member states than in Britain.

Belgium has announced that it is banning British travellers from Saturday, following the German chancellor Angela Merkel’s call for other EU leaders to impose tougher restrictions.

Portugal’s prime minister, António Costa, had opened up the country to British tourists who can provide proof of a negative Covid test, but he hinted at a summit in Brussels that he could make U-turn.

He said Merkel was “completely right” about needing “to coordinate regarding our external borders, since we have freedom of movement within the EU”.

A summit communique issued in the name of the 27 EU member states said they would “be vigilant and coordinated with regard to developments, particularly the emergence and spread of variants”.

Downing Street has tried not to be drawn into a row over the restrictions. “Currently it is down to individual EU member states to decide on the rules governing their borders,” a No 10 spokesperson said on Thursday.

“We will continue to have discussions with our European partners on the reopening of international travel but we’re very confident that our vaccination programme is providing a good way forward.