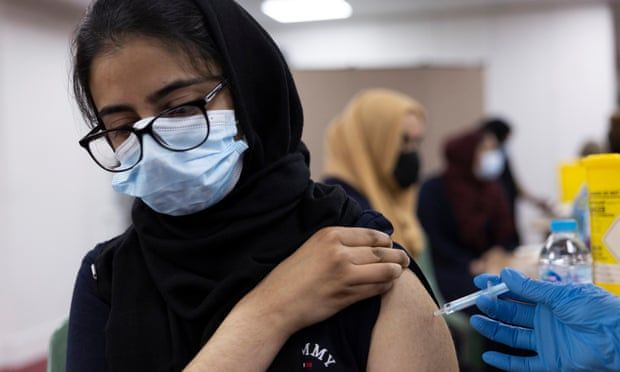 Based on data gathered by Public Health Scotland from 1 April to 6 June, the study provides further evidence that the two main vaccines rolled out in the UK – Oxford/AstraZeneca and Pfizer/BioNTech – are less effective against the Delta than the previously dominant Alpha variant.

During the period studied there were 19,543 community cases and 377 admissions to hospital where a specific variant of Covid-19 was confirmed. Of these, 7,723 cases and 134 hospital admissions were found to have the Delta variant, which is thought to be 60% more transmissible than the Alpha variant.

Dr Jim McMenamin, the national Covid-19 incident director at Public Health Scotland, said the findings showed two doses of vaccine were still “highly effective” against the Delta variant and urged people to get both shots when invited. “We’ve got an opportunity to counter the threat of this by encouraging uptake of both doses of the vaccine,” he said.

The researchers do not have enough data to say what the impact of the Delta variant is on death rates, but early indications suggest that, with the elderly population better protected with vaccines, the majority of those in hospital are now younger than in previous waves and have shorter stays. As with other variants, people with underlying conditions were more at risk of being admitted to hospital.

The work highlights how long it takes the immune system to mount a substantial immune response to the vaccine. Strong protective effects were not seen until at least 28 days after the first shots, when the risk of hospitalisation fell by about 70%. There were too few hospitalisations to compare the effects of the different vaccines.

Aziz Sheikh, a senior author on the study and professor of primary care research and development at the University of Edinburgh, said that given the importance of second doses he favoured a delay in lifting the last remaining Covid restrictions, originally earmarked for 21 June in the government roadmap for England.

“If there is a delay, I think that will give us the opportunity to widen coverage, which is incredibly important for those who at the moment have only got one dose. It will give the opportunity to increase the proportion of the population with two doses, and then what we want is a period of time where people can actually maximise their immune responses,” he said.

“I think any sort of increase in the window of opportunity before lockdown measures are completely brought to an end will be helpful, because that will help us to control community transmission. So, overall, I’d be very supportive of any delays that might be announced.”
#AstraZeneca  #Coronavirus  #Vaccines  #BioNTech  #COVID-19  #vaccine  #Pfizer  #Covid
Add Comment