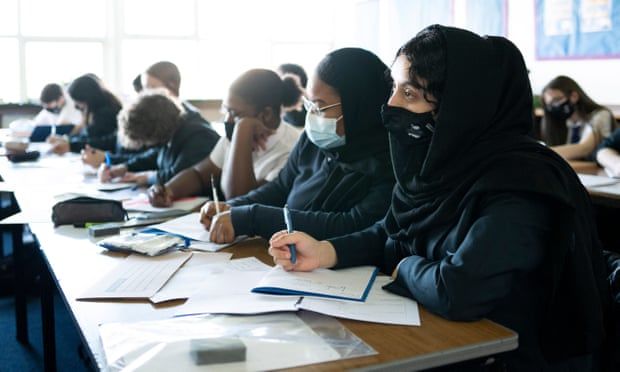 Those with underlying conditions could also be prioritised in any jab programme, minister suggests

Britain’s Covid vaccination programme for children could initially be restricted to those with underlying health conditions or who are about to turn 18, a government minister has suggested.

Robert Jenrick said children aged 12 or over who live with vulnerable people would also be at the front of the queue if ministers give the green light to vaccinating under-18s. The Department of Health said no decision had yet been reached.

Amid splits between scientists and growing pressure for a decision on the issue, the communities secretary said the government would receive advice soon from the Joint Committee on Vaccination and Immunisation (JCVI). This is understood to be expected within days.

Responding to a report in the Sunday Telegraph, Jenrick told Sky News: “We will be looking carefully at their advice when we receive it – we expect it very soon – on whether or not we should open up the vaccine programme in the first instance to children who are just short of their 18th birthday, to those children who have particular vulnerabilities, and those children who are in households where there are people who are particularly vulnerable. 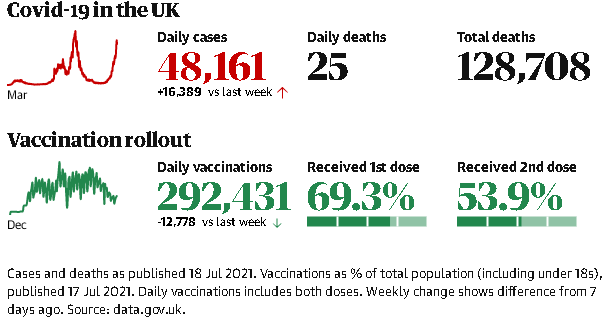 “That seems like a sensible way for us to proceed but ministers will need to make that decision when they’re armed with the final advice from the JCVI, our expert advisers, and I expect that we will be receiving that advice very soon.”

The JCVI’s main consideration is whether the benefits of children receiving the vaccine outweigh any possible risk. This includes a deliberation on whether the benefits extend beyond the protection afforded to adults by reducing spread of the disease from younger people.

One of the academic studies understood to have been considered by the JCVI concluded that Covid was “very rarely fatal” in under-18s, even among those with underlying health conditions. It calculated that Covid had a mortality rate of two in a million among all children and young people in England, after an analysis of all deaths of under-18s in the country in the first year of the pandemic.

Germany has also chosen to restrict vaccines to vulnerable children. Its vaccine advisory committee, Stiko, said it did not recommend the Pfizer/BioNTech jab for those aged 12-17 without pre-existing conditions. Many other countries, however, including the US and Canada, have chosen the mass vaccination route for all teenagers.

The decision on whether to extend the mass vaccination programme to children has split scientists. The UK’s Medicines and Healthcare products Regulatory Agency (MHRA) authorised the Pfizer/BioNTech jab for 12- to 15-year-olds last month after concluding it was “safe and effective in this age group and that the benefits of this vaccine outweigh any risk”.

Other government advisers, however, have cautioned that not enough is known about the possible side-effects in children.

Prof Devi Sridhar, the chair of global public health at Edinburgh University, said she would be “baffled” if the UK chose not to vaccinate all teenagers. She said: “It would be good if JCVI can reach a formal decision soon given imminent secondary school return in Scotland. Any advice should be transparent and published explaining the rationale and deliberations of the committee.

“The US, Canada, Italy and many other countries have run ahead vaccinating teens given clinical trials showing Pfizer is safe and effective with benefits outweighing risks, as the UK MHRA has validated”.

It came as the NHS carried out pop-up vaccination clinics in venues including Primark and the Tate Modern in London in an attempt to reach about a third of 18- to 29-year-olds who are thought to be unvaccinated despite being eligible for a jab.

The “grab a jab” initiative was launched at the weekend at Primark shops in Bristol, Leeds, the Open Championship golf tournament in Kent, and the Tate Modern and Oval cricket ground in London.

A Department of Health and Social Care spokesperson said: “The government will continue to be guided by the advice of the JCVI and no decisions have been made by ministers on whether people aged 12 to 17 should be routinely offered Covid-19 vaccines.”