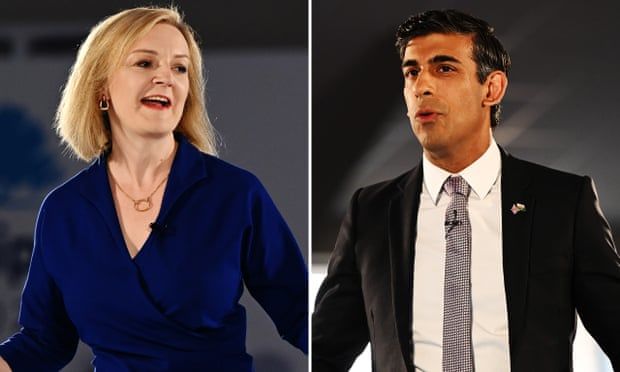 Conservative leadership candidates clash over how to tackle cost of living crisis as contest enters final week
Liz Truss’s plan to slash VAT across the board has come under attack from Rishi Sunak supporters, who argued it would do little to help those struggling to pay food bills and benefit richer households substantially more.

The prime ministerial frontrunner was on Sunday accused of mulling a “regressive” and “flawed” reduction in VAT of five percentage points, from 20% to 15%, in order to tackle the cost of living crisis and fight inflation – at a cost to the exchequer of up to £38bn a year.

Though Truss has previously voiced her opposition to “handouts”, a source on her campaign said on Sunday night she was keeping open the possibility of extra payments for all this winter.

But they stressed her preference was to target any extra spending at the poorest households, as well as pursue tax cuts such as reversing the hike in national insurance contributions and temporarily suspending the green levy on energy bills.

The comment ran counter to remarks made by the chancellor, Nadhim Zahawi, over the weekend – who said even relatively well-off workers could need government support. People earning about £45,000 could need help with spiralling electricity and gas costs, he added.

“Liz has been clear we need to lower the burden of taxation and focus on boosting energy supplies and this will be her priority as prime minister,” Truss’s source said. “She’s also been clear further support may be required to help. Her preference is to target this to those most in need, but isn’t ruling anything out.”

A source in Sunak’s team said that, given VAT was not paid on basic items such as staple foods, the move would do “nothing to help families pay their supermarket bills”.

They called the plan “flawed on many levels” and “regressive”, claiming it would deliver “very little to no benefit for lower-income households” and be “yet another addition to Liz’s spending blackhole”.

Truss’s team did not dispute the move, first reported in the Sunday Telegraph, was among options being drawn up for if she becomes prime minister on 6 September as expected. The plans were reported after Friday’s confirmation that the energy price cap will rise by 80% from October in England, Scotland and Wales.

John Redwood, a former head of policy for Margaret Thatcher touted for a role in the Treasury under a Truss premiership, also said action was needed on energy supply and prices for businesses facing a huge rise in energy bills.

The foreign secretary is aware of the difficult situation she will inherit with high expectations from voters. “This winter will determine the next general election,” one Truss-supporting MP predicted.


Truss’s proposed cut in VAT would be the largest ever, and was said to have been examined by the Treasury as part of modelling on Gordon Brown’s response to the 2008 financial crash, when VAT was cut from 17.5% to 15% for a year.

With Boris Johnson’s outgoing government having ruled out making any significant spending commitments before he leaves No 10 in just over a week, a former cabinet minister admitted on Sunday the situation was frustrating for people.

“Everybody wants to be able to say, ‘this is precisely what’s going to be announced should our particular candidate win’,” said Simon Hart, who quit the government in July and is now supporting Sunak.

“To be able to do that now, to speculate now about what the extent of the challenge would be and then come up with a solution is, I think, slightly unreasonable.”

Another Sunak-supporting MP said they now believed he would lose the leadership election by 5-10% to Truss, and was gloomy about the prospect of the two factions making peace when the result is announced in seven days.

Johnson called for Britain not to relent in its attempt to cripple Russia economically with sanctions as punishment for the invasion of Ukraine, admitting energy bills would be “eye-watering” this winter and that, for many, heating their home was “already frightening”.

He said Russia’s President Vladimir Putin thought “soft European politicians will not have the stomach for the struggle – that this coming winter we will throw in the sponge, take off the sanctions and go begging for Russian oil and gas”.

But doing so “would be utter madness”, Johnson said, adding that “colossal sums of taxpayers’ money are already committed to helping people pay their bills”.

Labour said it “shows how little he understands the shockwave” of the energy price cap price rise.

Pat McFadden, the shadow chief secretary to the Treasury, told Sky News that “for some people, it will simply be impossible” to pay their bills.

Johnson is expected to hammer home his message about the importance of energy resilience in a series of visits to mark his final week in office.
#Boris Johnson  #Johnson
Add Comment