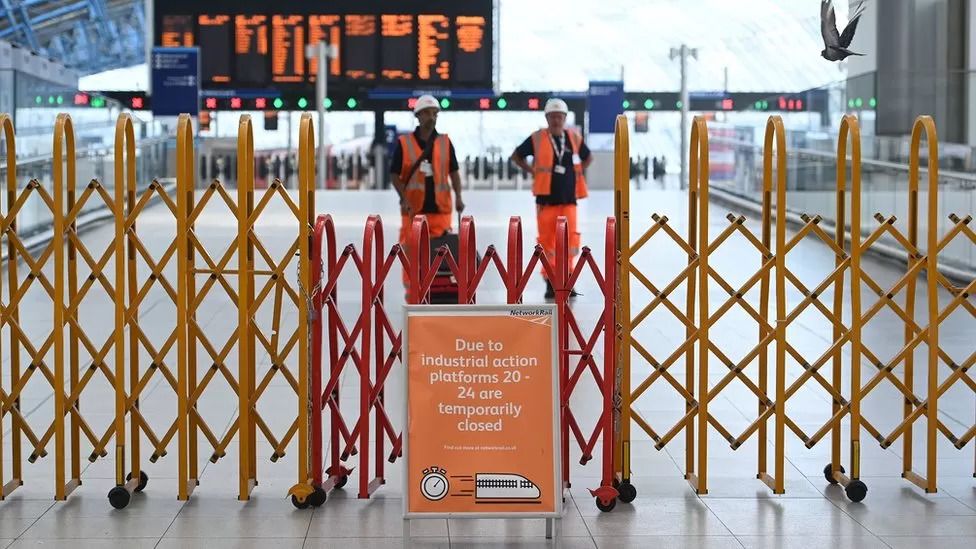 Train passengers have been facing more disruption, with only 20% of services running on Thursday due to strikes.

Half of Britain's lines are closed as more than 45,000 rail workers walk out in a row over pay, jobs and conditions.

Some routes have no services, and where they are operating, trains will only run between 07:30 and 18:30 BST. Another strike is scheduled for Saturday.

Passengers are being told only to travel by train if necessary.

It is the latest in a series of summer strikes and will alter the travel plans for workers, festival-goers and those heading to the cricket Test match at Lord's in London.

Mick Lynch, general secretary of the Rail, Maritime and Transport (RMT) union has warned that the dispute could go on "indefinitely" unless a pay settlement is reached.

In a letter to the transport secretary, he accused the government of using taxpayers' money to "bail out" private train companies, helping them to avoid being liable for revenue lost due to strike action.

A spokesperson for the Department for Transport said: "Yet again, for the sixth time since June, union leaders are opting to inflict misery and disrupt the day-to-day lives of millions instead of working with industry to agree a deal that will bring our railways into the 21st century."

A total of 4,300 services are expected to run across the country on Thursday and Saturday, according to track operator Network Rail. This is the highest number yet during the series of national RMT strikes.

However, it is still only just over a fifth of usual service levels.

Some places, including Portsmouth, Swansea and Blackpool, will have no trains at all and there will be no services running north of Falkirk.

Services will also finish earlier. The last train from London to Edinburgh on Thursday, for example, left at 14:00, while the last train to Leeds left at 15:05.

Trains will also start later than usual on the days following strikes. 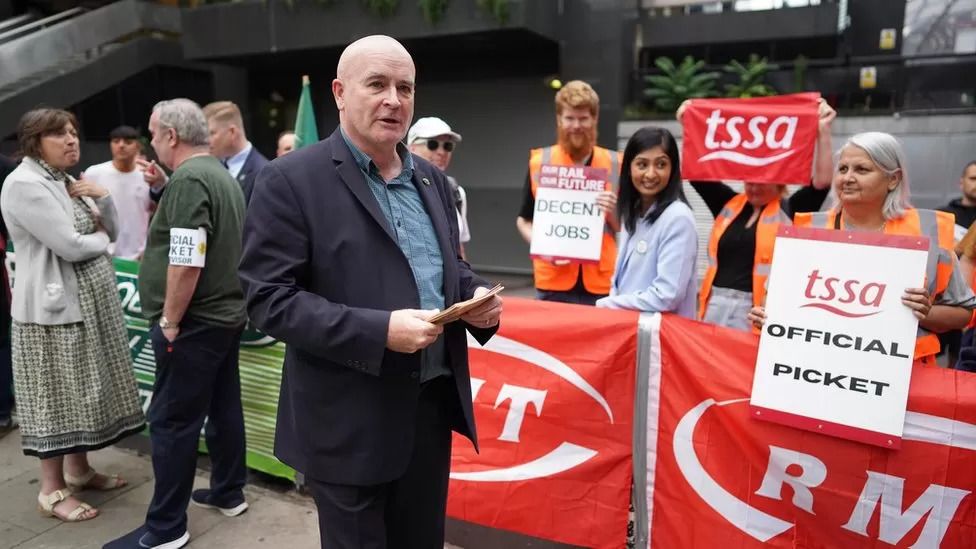 It is not possible to run trains without signallers, and only a fraction can run with the available contingency staffing. Network Rail owns and manages most of the UK's rail infrastructure.

If customers are not able to travel on Thursday or Saturday, the Rail Delivery Group - which represents operators - said they can use these tickets either the day before or up to and including 23 August. Otherwise customers will be able to change the ticket or claim a refund.

Network Rail's chief executive Andrew Haines described negotiations with unions as "slow" and "painful" and said there was "an absolute lack of clarity over what it would take for this strike to be called off".

Luke Chester, organising director at the TSSA, said: "The reality is that what we need to resolve this dispute is a pay rise which reflects the cost of living increase that is affecting most people in this country very severely."

Meanwhile, on Friday both the London Underground and Overground will be affected by RMT strike action, in a separate dispute over pensions and pay.

Transport for London said people should avoid the Tube, which will have little or no services running, and only use the rest of the network if essential.

It advised bus services may also be affected as drivers take part in a strike called by Unite the union.

Today is the start of four days of reduced services in a row, because strike day disruption spills over into later-starting trains the next day.

The rail industry says these national scale strikes cost them up to £30m a day.

And three weeks on from the previous national scale RMT strike, resolutions to the ongoing disputes over pay and conditions don't appear much closer.

One cohort of managers who are in the TSSA have come to a pay agreement with Network Rail - but other groups in the union haven't reached deals with their employers.

Last month, the RMT rejected Network's Rail's latest pay offer despite their insistence that the union should put it to their members first.

Talks since then haven't produced an agreement to prevent these latest walkouts going ahead. When it comes to the train companies, even less progress has been made.

Unions have repeatedly accused the government of not enabling effective negotiations, but the transport secretary has insisted only employers and unions can settle their disputes. 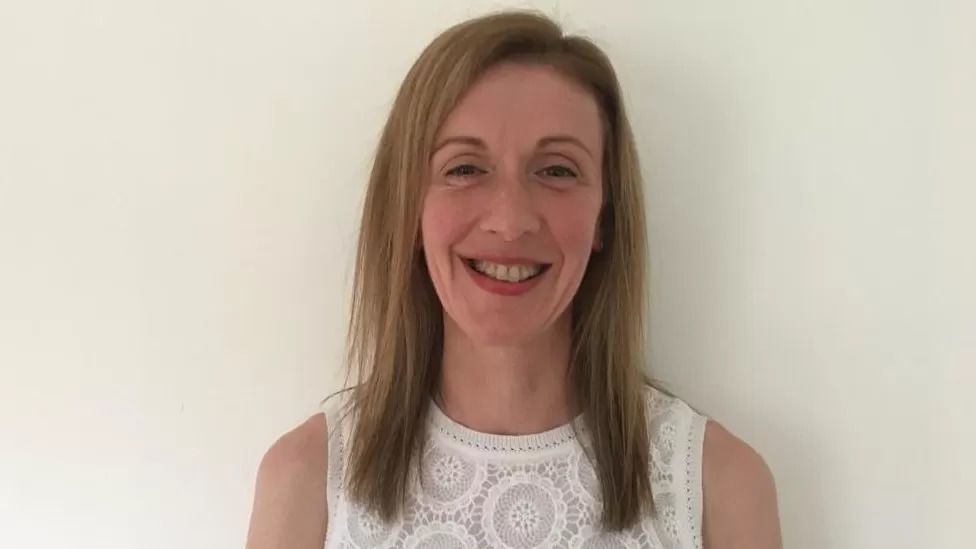 Lucy Westwood has spent an extra £100 on a hotel and petrol to be able to take her children to the theatre on Thursday.

Her original plan had been to get the train from Lichfield to London to see Back to the Future. She had bought theatre tickets for the August "Kids Week" where children get cheaper tickets.

"I'd got a day family return - all sorted and planned but then heard about the strikes," Lucy said.

She was unable get a refund from the theatre and was offered to swap her tickets but could not afford to pay the difference for a more expensive date.

"It's made things a lot more difficult, I was stuck with tickets I couldn't get a refund for and two very disappointed kids," she said.

"It's the highlight of our week but its costing me a lot more than it would have to get the train which is really frustrating."

Which train companies are affected by Thursday's strikes?