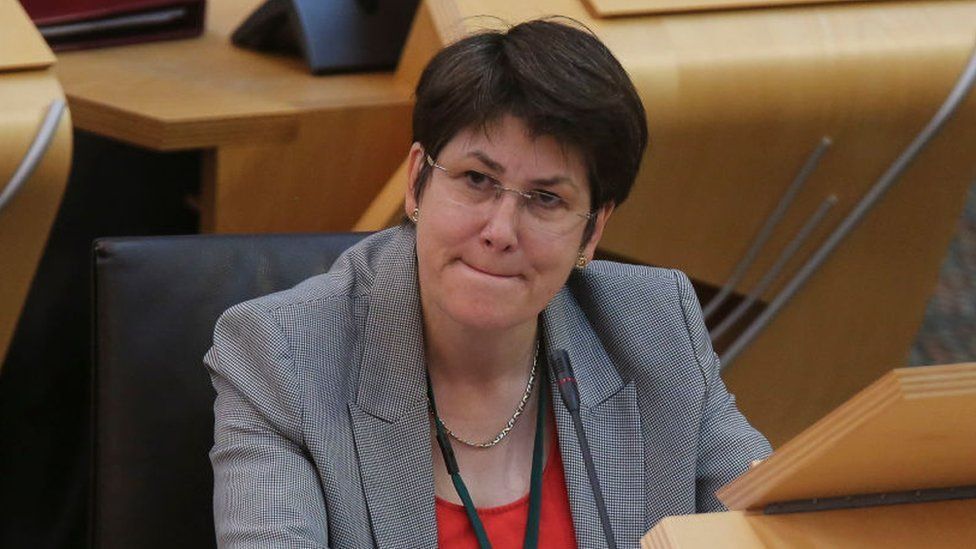 A Conservative MSP has apologised after suggesting that Scottish First Minister Nicola Sturgeon was anti-English.

North East Scotland MSP Tess White heckled the first minister while she was answering a question at Holyrood about anti-Irish prejudice.

Amid an angry response from SNP MSPs, Ms Sturgeon complained to the presiding officer that she was "deeply offended" by the remark by Ms White.

Ms White later apologised and said her comments were "over the line".

She was admonished by Presiding Officer Alison Johnstone, who said that "members must be in no doubt at all that I expect their conduct at all times will be worthy of that of a member of the Scottish Parliament".

The first minister was answering a question from Labour MSP Pauline O'Neill about "anti-Irish and anti-Catholic prejudice" in Scotland after arrests were made in the wake of Sunday's Old Firm football match.

Ms Sturgeon responded by saying: "I take the view that anybody who chooses to live in Scotland, whether they or their families have been here for generations or whether they have come to Scotland very recently, this is their home".

At this point she was heckled by Ms White, and although the exact words were not picked up by microphones in the parliamentary chamber the newly-elected MSP is reported to have said "except if you're English" - or words to that effect - apparently inferring that Ms Sturgeon was anti-English.

The first minister told the presiding officer that she was "deeply offended" by the comment and wanted Ms White to be "asked to reflect on that and to withdraw the comment".

She added: "It was a comment that would have been unacceptable in any context, but in the context of what we are discussing right now I am deeply aggrieved that any member thought that was an appropriate thing to say."

Later in the afternoon, Ms White - who is herself English and says she has been the subject of anti-English sentiment in the past - raised a point of order to make a formal apology.

She said: "My comments during first minister's questions were over the line and I would like to withdraw them and apologise to both the chamber and the first minister."

Ms Johnstone said "great offence was caused" by the remark, and she had Ms White stand in the chamber to confirm that her apology was "unambiguous".