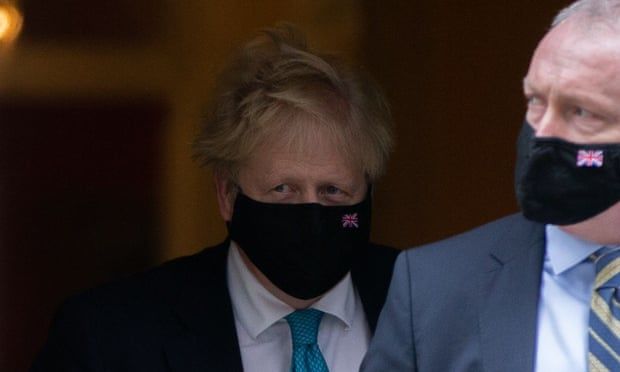 Senior backbenchers to move as a collective to force no confidence vote
A new raft of Conservative MPs are poised to send letters of no confidence in Boris Johnson when the long-awaited “partygate” report is published, as the prime minister was pressured by his supporters to oversee a complete clearout of No 10.

The Guardian has learned that senior backbenchers are to move as a collective to force a no-confidence vote in Johnson once senior civil servant Sue Gray releases her findings, which on Tuesday helped trigger a criminal inquiry.

Newly elected MPs wounded by the publicising of the so-called pork pie plot are understood to have remonstrated with more senior colleagues for leaving them exposed. But a consensus has now formed among more experienced MPs that Johnson should face a no-confidence vote.

“It’s the white, middle-aged backbencher he has to watch,” one MP said. “People who feel strongly about their morals and to whom this prime minister can’t offer anything personally.”

Among those who are prepared to move against Johnson are more than two dozen former ministers – there are more than 70 in that category in total – according to the rebels’ latest calculations.

There will be no group statement from the One Nation group of centrist Tories, which has more than 100 members. Instead, MPs said letters were more likely to come from smaller groups of like-minded MPs moving together.

A consensus is also forming among Johnson’s allies that he cannot rely on the support of all his ministers, several of whom have expressed serious concerns to colleagues.

While the prime minister’s supporters were bullish that the “window has passed” for his critics to make their move, several frontbenchers told the Guardian they were privately concerned about Scotland Yard launching its own investigation.

One said: “Some of us are still waiting to make up our mind.” Another admitted: “If there’s any evidence of criminal wrongdoing by the prime minister, he can’t stay in post.”

Gray’s report was said to be close to completion on Tuesday night, but there has been no official explanation for why it has not yet been sent to Johnson.

On Wednesday night the business secretary, Kwasi Kwarteng, indicated on ITV’s Peston that the report might not be out until next week.

A No 10 source denied Downing Street was pressuring Gray to publish a separate summary rather than the full findings. They said conversations were ongoing within the Cabinet Office over the Metropolitan police investigation and insisted there had not been an order made to delay the report’s publication.

If Gray’s report is published on Thursday or Friday, Johnson is prepared to go to the Commons with it – despite the potential disruption of MPs’ plans in their constituencies.

Behind the scenes, Johnson’s supporters are planning for how to avoid a no confidence vote once the report is released, or reduce the numbers who will vote against him if one is called.

Ideas are being discussed to convince backbenchers that genuine changes will be made to key parts of the government machine, including a clearout of some No 10 political advisers.

In a bid to restore discipline after a series of rebellions, the government whips office has also been tipped for an overhaul in the run up to the February recess.

The chief whip, Mark Spencer, could be given a new job as an environment minister, with Chris Pincher – one of the main five MPs running a shadow whipping operation to save Johnson’s premiership – tipped as a potential replacement.

Johnson’s allies hope the parliamentary recess beginning 10 February will act as a “firebreak” to calm colleagues down, with plans being drawn up for the prime minister to head away on trade trips to Australia and Japan.

The shadow whipping operation is meeting up to three times a day – twice in-person and once virtually. It is organising in a nearly 100-strong WhatsApp “support group”. However there are fears some “spies” have infiltrated, and are briefing those who would back the chancellor, Rishi Sunak, in a leadership contest.

Senior members of the operation were said to have been told that two people who had submitted no-confidence letters had withdrawn them. One minister said the message being given to colleagues was: “Unless you’re gonna kill the guy, back off – he’s going nowhere.”

Keir Starmer used prime minister’s questions on Wednesday to press Johnson to resign if he misled parliament by insisting no Covid rules were broken. He said: “Frankly, the public have made up their minds. They know the prime minister is not fit for the job.”

Johnson insisted he could not comment until Gray’s report was published, and was showered with helpful questions from Tory MPs about the vaccine rollout, jobs and Brexit.

Afterwards, he spoke to more MPs one-to-one in his Commons office. One said they had requested a meeting with the prime minister in summer 2020, which was suddenly granted on Wednesday.

But a long-serving MP said they had been appalled by Johnson’s attitude in their face-to-face conversations, which had enforced their position that the prime minister did not understand the seriousness of the situation.

Mark Logan, elected as a Tory MP in 2019 for Bolton North East, told Sky News he had spoken to Johnson recently and made clear “there has to be a huge change” of heart by the prime minister as well as the “approach and the infrastructure around him”.

Some Johnson critics have said there are circumstances where a no-confidence vote would have to be paused in a volatile political environment.

Representations would be made to Brady if tanks roll across the Ukrainian border that the vote of no confidence should be delayed for four weeks. “It’s not ideal timing for a leadership contest,” one of those who is considering putting a letter in admitted.

Meanwhile, senior civil servants fear the blame will be pinned on them for the more than a dozen social gatherings reported to have taken place in No 10 and across Whitehall.

Those civil servants who could be in the line of fire include the cabinet secretary, Simon Case, and the prime minister’s principal private secretary, Martin Reynolds, who invited 100 Downing Street staff to a “bring your own booze” party in the first lockdown.
#Boris Johnson  #Johnson  #vaccine  #Covid
Add Comment