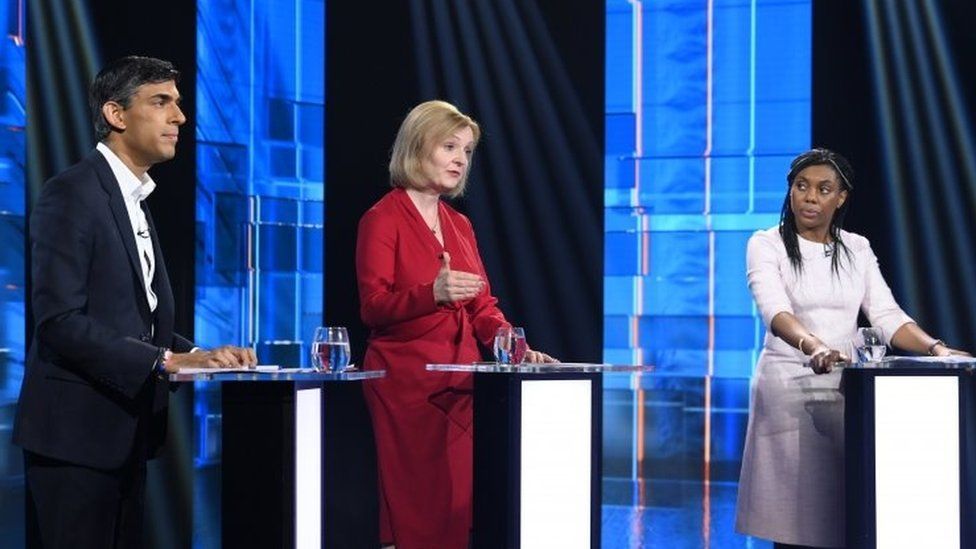 Tory leadership rivals stepped up their attacks on each other's records and policies in their latest TV debate.

All five ruled out an early general election if they became prime minister in seven weeks' time.

At one point, the candidates were asked to raise their hands if they would give departing Prime Minister Boris Johnson a job in their cabinet. None of them did.

MPs will vote for a third time on Monday as they whittle down the field eventually to two, who will then face postal ballot of Tory members to decide who will be the next prime minister.

In the hour-long ITV debate, some of the fiercest clashes were between Mr Sunak and Ms Truss, whose divisions over how to bring rising living costs under control while growing the economy were laid bare.

The record of Mr Sunak - who won the first two rounds of MPs' voting - as chancellor has come under sustained attack during the leadership campaign.

Mr Sunak has been forced to defend tax rises introduced during his time as chancellor, including April's hike in National Insurance to pay for social care and the NHS.

In the debate, Ms Truss said Mr Sunak had "raised taxes to the highest level in 70 years", arguing that this was "not going to drive economic growth".

"The fact is that raising taxes at this moment will choke off economic growth, it will prevent us getting the revenue we need to pay off the debt," Ms Truss.

Mr Sunak responded that the pandemic damaged the economy and the money has to be paid back.

"There's a cost to these things and the cost of higher inflation, higher mortgage rates, eroded savings," Mr Sunak said. "And you know what? This something-for-nothing economics isn't Conservative. It's socialism." 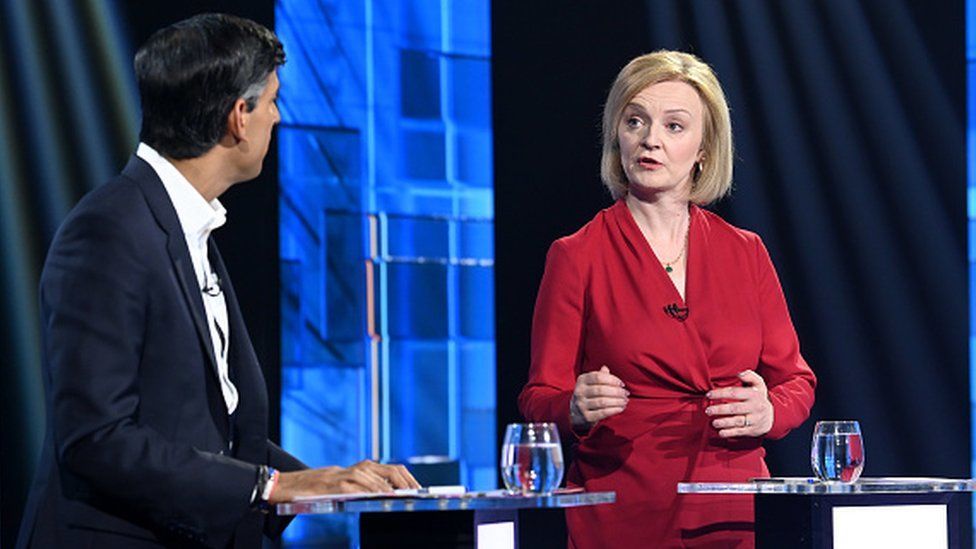 Trade minister Penny Mordaunt - the bookmakers' favourite to win the race - said the limited tax cuts she advocated were not inflationary and people need help now with the cost of living.

But Mr Sunak hit back, accusing Ms Mordaunt of a "dangerous" plan to scrap his economic rule of only borrowing to invest.

The former chancellor said even Jeremy Corbyn - the left-wing former Labour leader - did not advocate such a loosening of the public finances.

There were also sharp exchanges between Ms Mordaunt and former equalities minister Kemi Badenoch over a row about the self-identification for transgender people.

Ahead of the debate, Ms Mordaunt told the BBC there were a "number of smears going on in the papers" and dismissed claims she had backed gender self-identification when she was an equalities minister in 2019.

"I think this whole thing is unedifying," Ms Mordaunt said. "I know why this is being done. What I would say to you is, all attempts to paint me as an out of touch individual will fail."

Ms Badenoch said she was the candidate for the future whose honesty could "change things for the better".

Other key moments in the debate included:

*  Pointing out Ms Truss had been a Liberal Democrat and a Remain supporter in the past, Mr Sunak asked her which one she regretted most. Ms Truss said she had "been on a political journey"

*  Ms Badenoch accused Mr Sunak of not taking her seriously when she raised concerns about Covid loan fraud, which he denied

You had to keep reminding yourself these were five people who are actually in the same party.

And the two of them taking the greatest lumps out of each other sat around the same cabinet table a fortnight ago.

Changing leaders between elections can offer a party a chance to renew in office.

It also offers plentiful opportunity for it to rip itself to shreds in public.

Tom Tugendhat - chairman of the foreign affairs select committee - said those who had been ministers under Mr Johnson "lent credibility to the chaos" of his government.

Grilling Ms Mordaunt, Mr Tugendhat challenged the trade minister to give the "details of the plans you are laying out".

In reply Ms Mordaunt said: "I think there's a couple of things we need in order to win the next general election: one of them is me as the prime minister because the polling shows that I'm the only one that can beat Keir Starmer and take the fight to Labour."

The five remaining candidates are vying to succeed Mr Johnson as Tory leader and prime minister after a cabinet mutiny forced him to resign.

In a sign of how close the race has become, a survey of party members for the Conservative Home website on Saturday suggested Ms Badenoch was leading the pack, with Truss in second and Mordaunt - currently the bookmakers' favourite - dropping to third.

But Mr Sunak is still in pole position after coming top in the first two rounds of voting among Tory MPs.

Labour shadow minister Conor McGinn said the debate showed how "out of touch" the Tories were, accusing them of squabbling over "fantasy economic plans" while households struggle with living costs.

Liberal Democrat leader Sir Ed Davey said none of the Tory candidates have "a plan to get our country out of the crisis that they have caused" and urged the party's new leader to call a general election as soon as they are in post.

SNP Deputy Westminster Leader Kirsten Oswald MP said Scotland was "lucky to get a cursory mention in a debate where the candidates failed to escape the Westminster bubble for the public at home" while people were hit by the cost of living crisis.