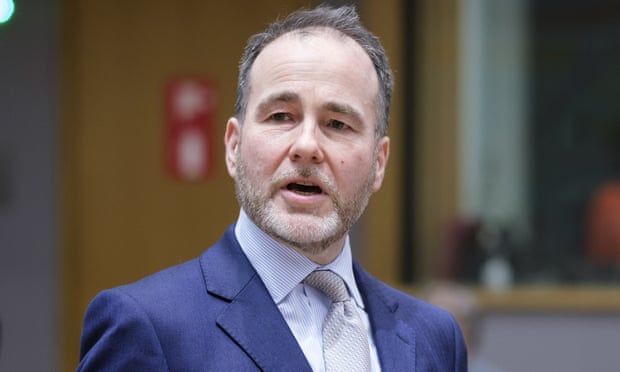 The Conservative deputy chief whip has resigned after admitting he had “embarrassed myself and other people” following reports that he drunkenly groped two men at a private club.

Chris Pincher wrote to Boris Johnson saying he was standing down after drinking too much. However, he did not address the allegations that he was reported to the whips by Conservative MPs who had witnessed his behaviour towards two men at the Carlton Club in Piccadilly.

It is the latest in a series of allegations of sexual misconduct by Tory MPs and will put further pressure on Boris Johnson to clean up the culture in Westminster. It is also the second time that Pincher has resigned from the whips’ office following allegations made against him, raising questions about Johnson’s judgment in promoting him to a role in charge of MP discipline and pastoral affairs.

In a letter to the prime minister, Pincher said: “Last night I drank far too much. I’ve embarrassed myself and other people which is the last thing I want to do and for that I apologise to you and to those concerned.

“I think the right thing to do in the circumstances is for me to resign as deputy chief whip. I owe it to you and the people I’ve caused upset to, to do this.”

In the short letter, which did not address the complaints about his sexual conduct, first reported in the Sun, Pincher added: “I want to assure you that you will continue to have my full support from the back benches … It has been the honour of my life to have served in Her Majesty’s Government.”

An MP present at the Carlton Club on Wednesday night said Pincher was asked to leave by several people and was so drunk “he could barely stand up”.

The victims were said to be two staffers, and multiple MPs who witnessed the alleged groping messaged chief whip Chris Heaton-Harris to demand a meeting after the incident.

One of those who reported Pincher was fellow whip Sarah Dines, two sources said. 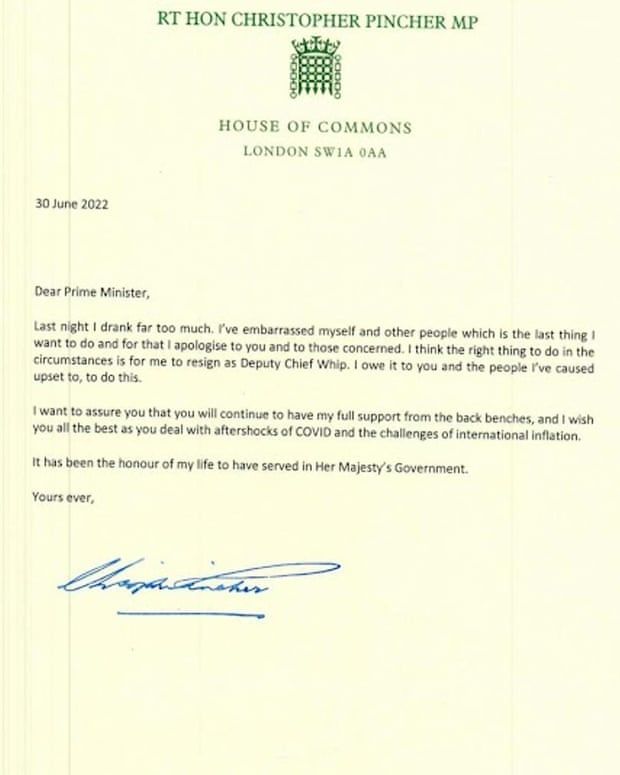 The MP for Tamworth previously stood down from the whips’ office in 2017 after he was reported by the Mail on Sunday as making an unwanted pass at the former Olympic rower and Conservative activist Alex Story. The alleged incident reportedly took place with Pincher dressed in a bathrobe at his London home.

He was later cleared in a Conservative party investigation. At the time, a party spokesperson said: “Following an investigation, a panel headed by an independent QC considered the evidence and has concluded there has not been a breach of the code of conduct.”

There was disquiet among some Tory MPs that Pincher had resigned rather than been sacked, and had been allowed to keep the Conservative whip. “That’s not going to last,” one MP predicted.

Another said Pincher had only been given his role because of his loyalty helping run Johnson’s “shadow whipping operation” in the spring to shore up support.

Angela Rayner, the Labour deputy leader, said: “This latest episode shows how far standards in public life have been degraded on Boris Johnson’s watch. Boris Johnson has serious questions to answer about why Chris Pincher was given this role in the first place and how he can remain a Conservative MP.

“The Conservative party is so mired in sleaze and scandal that it is totally unable to tackle the challenges facing the British people.”

Boris Johnson’s government has been hit by a string of sexual misconduct scandals in recent months. Last month, a Conservative MP was arrested on suspicion of rape and sexual assault offences spanning seven years between 2002 and 2009. He was later bailed without being charged, pending further inquiries.

Scotland Yard said the unnamed man in his 50s was also detained on suspicion of indecent assault, abuse of position of trust and misconduct in public office. The MP has not been suspended by the Conservative party but Heaton-Harris asked him to stay away from parliament.

Imran Ahmad Khan, the Conservative MP for Wakefield, was found guilty in April of sexually assaulting a 15-year-old boy after plying him with gin at a party in 2008. Khan assaulted the boy in Staffordshire in January 2008, 11 years before he became an MP. He resigned as an MP two weeks after he was found guilty.

Another Conservative MP, David Warburton, lost the whip after the Sunday Times reported he was facing allegations from three women.

Warburton, 56, was accused by one of the women of climbing into bed with her naked. She told the newspaper she repeatedly warned that she did not want to have sex with him, but alleged that he ground his body against her and groped her breasts.

He is said to have denied any wrongdoing, and insisted he had “enormous amounts of defence, but unfortunately the way things work means that doesn’t come out first”.

Rob Roberts, the Conservative MP for Delyn, was allowed to rejoin the party despite an independent investigation finding that he sexually harassed a junior member of staff.

Roberts was suspended for 12 weeks after the independent panel found he had made “significant” repeated and unwanted sexual advances towards a former member of staff and used “his position as his employer to place him under pressure to accede”.

He had his membership to the party restored but continued to sit as an independent MP in parliament.