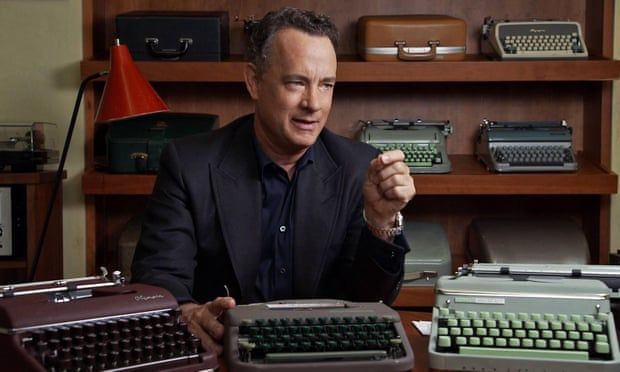 In the summer Tom Hodges, who runs Typewronger Books in Edinburgh, sent a letter to the actor to let him know of his shop and the typewriter exhibition currently running at the National Museum of Scotland.

In his letter Hodges explained all about his life including how he became a typewriter mechanic and “geek” while living at the famous Paris bookshop Shakespeare and Company. He also included an origami dragon that he had made.

To his surprise he received a typed reply from the You’ve Got Mail star, who himself has a collection of 120 typewriters and loves to write using one.

Hodges told the Guardian: “I receive letters from people all the time and they are all precious to me but it is not every day you receive one from a Hollywood legend and they call you their hero. I love all his films but I also love the fact he is such a fan of typewriters.

“It is a gorgeous letter and I am made up about it. It’s all been a bit surreal. It will be framed and have pride of place in the bookshop.”

Hanks wrote his reply on the set of the Baz Luhrmann-directed Elvis biopic in which Hanks will play the singer’s notorious manager, Colonel Tom Parker. The letter even had a reproduction Colonel Parker letterhead.

In Hanks’s missive, which endearingly has a number of typos, the actor commended Hodges for “battling against the giants to sell the best of books – and keep typewriters alive”.

He also suggested he may well drop in on Typewronger Books if he is ever in Leith.

Hodges, 35, who typed his letter to Hanks on his grandfather’s old Remington Noiseless typewriter, said he is a typewriter and independent bookshop “evangelist”.

In Typewronger Books – inspired by Hodges’s skill at making “right” defective typewriters – there is a typewriter for people to come in and use and write a letter or even the beginning of their novel.

Hodges is keen to move away from the “obsession with perfection” that has come with the advent of computers and cutting and pasting.

As for the charm of the machines, the bookseller and typewriter mechanic who has more than 100 of his own machines concluded: “I love playing with the mechanisms, but for me it is the sound and the sensation of hitting the keys of a typewriter that is magical.”
Add Comment