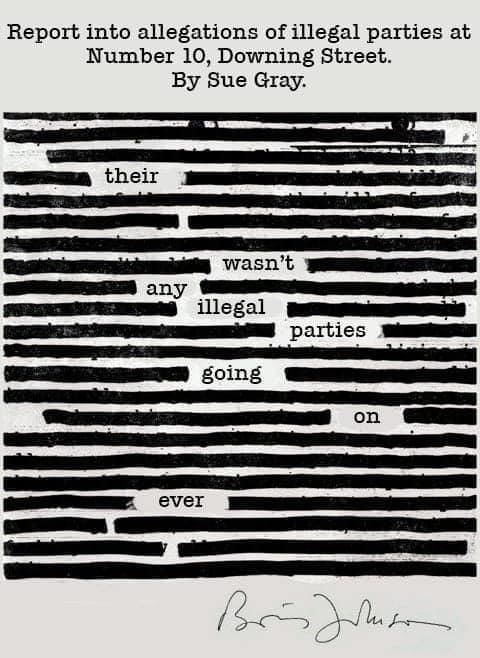 ‘Time for the truth’: MPs call on Boris Johnson to publish ‘partygate’ report

Cabinet Office officials wrangle over final version of Sue Gray’s findings on alleged Covid rule-breaking parties
Boris Johnson has been told it is “time for the truth to be released” as he faced more calls to publish a long-awaited report into “partygate” in full and not “suppress crucial details”.

Officials in the Cabinet Office are still wrangling over the final version of Sue Gray’s findings on a string of alleged Covid rule-breaking parties in Downing Street and other parts of government.

Despite anticipation reaching fever pitch earlier this week that the report on which the prime minister’s premiership could hang was close to completion, its publication was delayed when Scotland Yard opened its own investigation.

Sources said on Thursday night that the senior civil servant’s findings had still not been sent to No 10, with government lawyers studying the document amid concerns that publishing some information could prejudice the new investigation.

Gray is said to want to send it in a state that can then be published by Downing Street in full, without the need for any further redactions.

Some Tories believe the report will not be released until early next week, given they think Gray will be mindful of criticism it is being sneaked out if publication came on Friday or the weekend, when most MPs will be back in their constituencies.

Government insiders have rejected accusations they are responsible for the delay, and suggested instead it is because of the Metropolitan police’s discussions with the Cabinet Office.

But Scotland Yard has not formally objected to full publication of the Gray report, sources said.

Gray’s findings were sufficiently clear cut in their detailing of rule breaches to trigger a criminal investigation, according to the explanation about why police were acting, from the Met commissioner, Cressida Dick.

Johnson claimed he had “absolutely not” been involved in delaying the report, stressing people should wait for the independent inquiries.

He said “of course” it would be published in full, but Downing Street has made clear that is only the intention of No 10, as it is not yet aware what the format will be and whether any sensitive personal or security information would need to be redacted.

“We are in no way seeking to block the report,” the prime minister’s spokesperson said. “It remains our intention to publish the report as it is received from the investigation.”

But one Tory critic feared Johnson would “wriggle out of the scrutiny he deserves once again”.

Another senior backbencher, Mark Harper, said: “The report must be published in full. Any attempt to conceal or suppress crucial details would be wrong.”

Opposition parties also raised concerns over the handling of the report’s publication.

Angela Rayner, Labour’s deputy leader, said in a letter to Johnson it “would be unconscionable that after the public has sacrificed so much in our collective effort against this pandemic, you would allow any obstruction of the truth or any unnecessary delay to the publication of this report”.

She said it was time for the truth to be released, and pressed the prime minister for a commitment to publish the report in full along with any evidence also submitted to him, with any redactions accompanied with a full explanation.

Ed Davey, the leader of the Liberal Democrats, said photos, emails and messages should be released too. He said “any attempt to whitewash this matter or spike this report or to start to hide again” would provoke even more public anger.

Davey said: “It would be a bitter insult to the public, especially to the bereaved, if the report was not now published in full.”

Some Tory MPs are waiting to read the Gray report before deciding whether to submit a letter calling on Johnson to stand down. If 54 are sent, a vote of no confidence will be held.

Allies of the prime minister believe the longer-than-expected wait for the official civil service investigation is proving helpful for him, because it is letting anger in the party ebb.

Nevertheless, even some ministers who are being loyal in public admit they are preparing to reevaluate their support for Johnson in private once they have seen the full extent of Gray’s report.

Even if Johnson manages to avoid or win a vote of no confidence, his restive backbenchers are concerned about the growing cost-of-living crisis, coupled with the planned national insurance hike due to come into effect in April, just when the energy price cap is also dramatically raised.

This article was amended on 28 January 2022 because an earlier version referred to April, when the energy cap is “ is also dramatically reduced”. That should have said “dramatically raised”.

… as you’re joining us from Thailand, we have a small favour to ask. Tens of millions have placed their trust in the Guardian’s fearless journalism since we started publishing 200 years ago, turning to us in moments of crisis, uncertainty, solidarity and hope. More than 1.5 million supporters, from 180 countries, now power us financially – keeping us open to all, and fiercely independent.

Unlike many others, the Guardian has no shareholders and no billionaire owner. Just the determination and passion to deliver high-impact global reporting, always free from commercial or political influence. Reporting like this is vital for democracy, for fairness and to demand better from the powerful.

And we provide all this for free, for everyone. We do this because we believe in information equality. Greater numbers of people can keep track of global events, understand their impact on people and communities, and become inspired to take meaningful action. Millions can benefit from open access to quality news, regardless of their ability to pay for it.
#Boris Johnson  #Johnson  #Covid
Add Comment