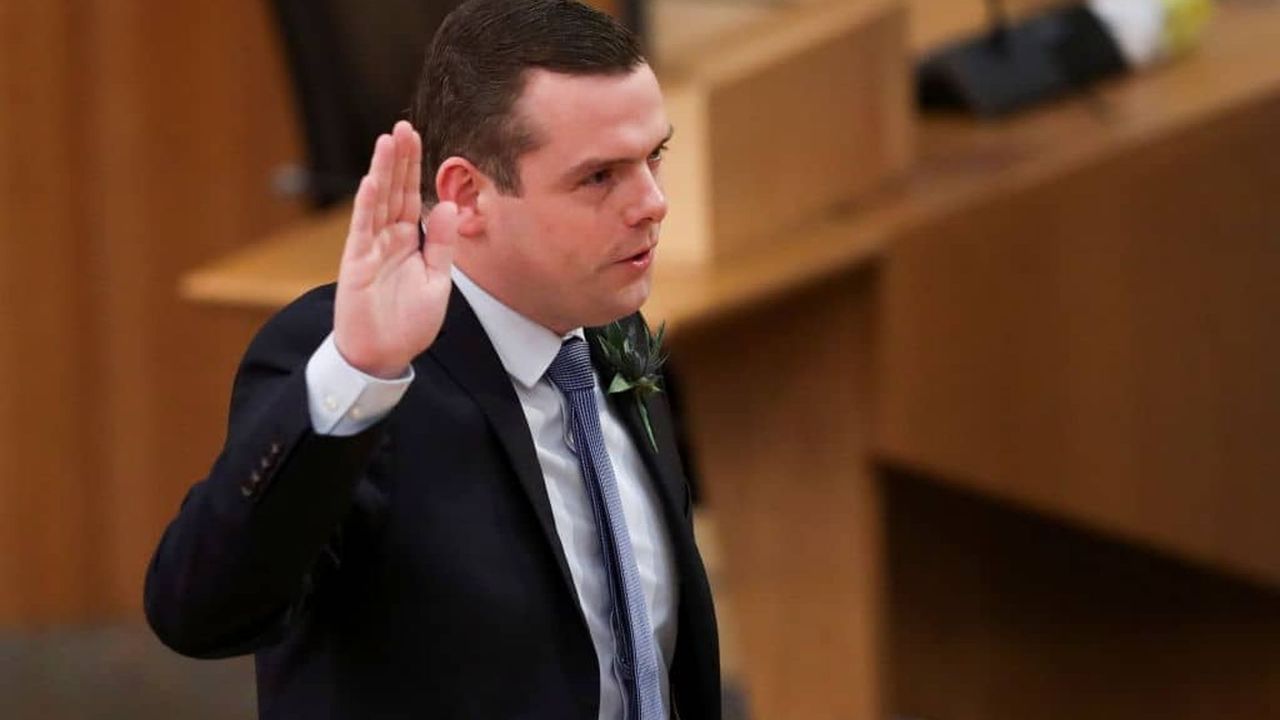 But will voters trust him to run Scotland if he can't run his personal affairs?
At the risk of talking down a good, old-fashioned political scandal, suggestions that Scottish Tory leader Douglas Ross has become embroiled in the Westminster sleaze row deserve a sizeable question mark over them.

The Moray MP referred himself to the parliamentary standards commissioner after failing to declare income. Given the scrutiny that other Tory MPs are coming under, it is only natural that this news would be greeted with glee by opponents and journalists — and no doubt some sharp eyebrow-raising by the electors of Moray.

Alas, the details are pretty mundane. As well as an MP, Ross is also an MSP at Holyrood and a part-time linesman for the Scottish Football Association. (A Tory, a referee and two politicians walk into a bar and they’re all the most unpopular man in Scotland.) The Herald reports that Ross omitted ‘more than £28,000 in salaries’ for officiating 16 SFA matches and the first five months of his Holyrood salary from May through September. Ross says he made ‘a bad error’ but the SNP has declared him 'knee-deep in the Tory sleaze scandal’.

I understand the actual figure is closer to £15,000. Because he is already salaried as an MP, he receives one-third of the pay other MSPs get, which he in turn donates to local charities. The total for five months is roughly £8,600. The almost £7,000 he made for refereeing matches between last November and January covers three reporting intervals (meaning he failed to report the income three rather than 16 times).

I should declare an interest myself as a critic of Douglas Ross but while he has clearly broken the rules in neglecting to report income, the accusation that he’s mired in sleaze doesn’t stand up on the basis of what’s being reported. For one, the errors have only come to light because Ross discovered them and reported himself to the standards commissioner, Kathryn Stone. He has never hidden his dual mandate or his part-time role as a linesman, so he can hardly be accused of secretly lining his pockets. He would have a hard doing so, anyway. The SNP hates the Scottish Tory leader having a connection to Westminster almost as much as it hates his involvement in Scottish football and refers to him as ‘triple-jobbing Douglas Ross’.

Moreover, there is no suggestion of lobbying for his own financial ends or similar behaviour. He has been extremely lax in maintaining his register of interests, a lapse in his duty to parliament and to the public, but the SNP is up to mischief in trying to link this with the sleaze row. Provided Holyrood and the SFA are his only undeclared income, Ross would appear to be guilty of a cock-up rather than corruption. Of course, that will be for Stone to decide but this episode carries at least two lessons for the Scottish Tory leader.

First, if he’s serious about challenging Nicola Sturgeon for the first ministership at the 2026 Holyrood election, he needs to up his game when it comes to the details stuff. You can’t ask the voters to trust you to run the country if you can’t remember to fill out a form. The second lesson: his refereeing job continues to be a source of hassle for Ross and, while it may bring him personal satisfaction, the political costs just keep stacking up.
Add Comment