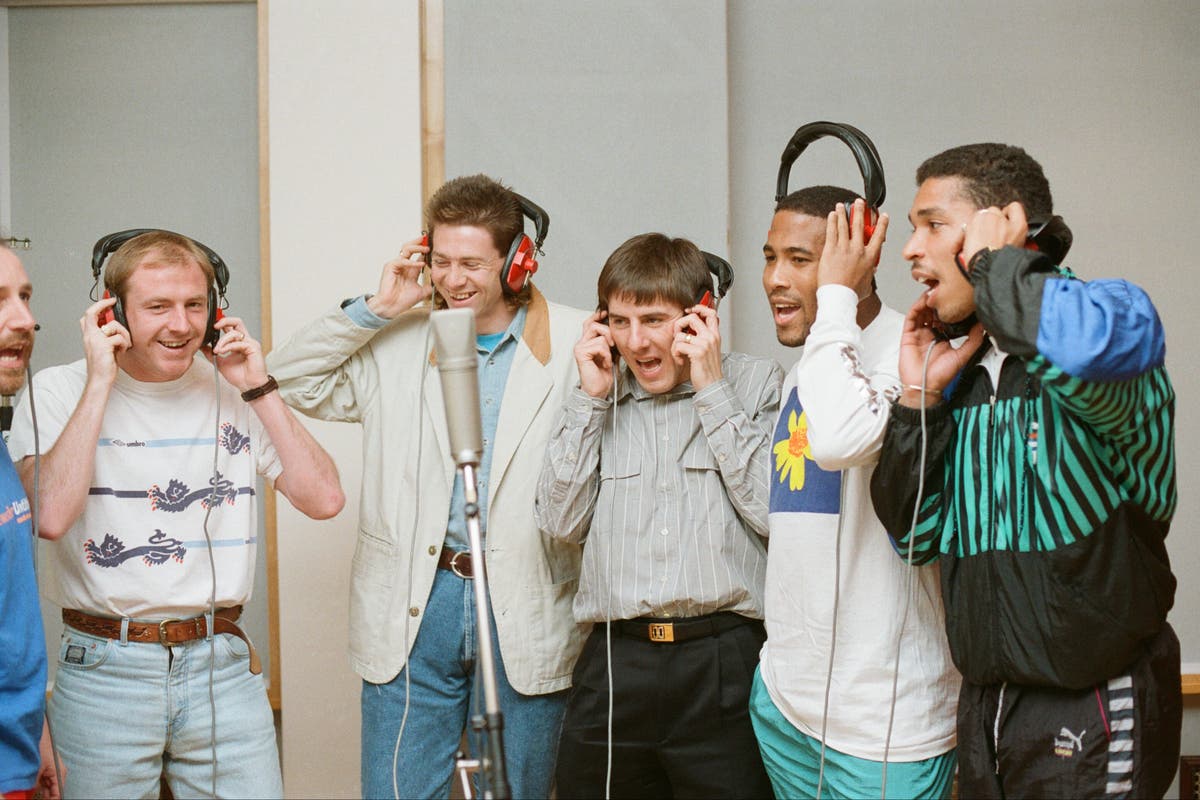 From Three Lions to World In Motion and beyond, we look back the peculiar tradition of the national team’s official anthems

England had just beaten Scotland at Wembley during Euro ‘96 and, with the Wembley crowd giddy on Gazza, the home nation’s official song of the tournament, Three Lions, began to play over the tannoy. Frank Skinner, who co-wrote and sang on the track alongside David Baddiel, saw the moment unfold from his seat inside the stadium.

It wasn’t just his own music that he could hear through the loudspeakers, Skinner wrote in his 2002 autobiography, “but 70,000-odd English men, women and children waving their flags of St George and singing their hearts out”.

It was at exactly this point that a self-deprecating Britpop tune transmogrified into the de facto national anthem — a song that still follows the England team wherever they go, even 25 years later. It was also a high-point in the strange, storied and rather silly history of the English football song; a timeline that resembles the fortunes of the national team itself, with rare flashes of glorious brilliance made all the better by lots of glorious failure.

The tradition dates back to 1966. As Sir Alf Ramsey’s men romped to victory in that year’s World Cup (you might have heard the story?) the nation was shuffling along to World Cup Willie, a song released by skiffle hero Lonnie Donegan with the approval of the Football Association.

Keen to repeat the trick as the team jetted off to Mexico to defend their title in 1970, the FA agreed to let songwriters Bill Martin and Phil Coulter come up with another hit. The duo had experience when it came to overseas success — they penned Sandie Shaw’s winning song at the 1967 Eurovision Song Contest — and, with the promise of appearing on Top of the Pops, the England squad themselves were persuaded to sing on the track.

Martin was inspired by the wartime songs he’d grown up with, and oversaw a very jolly, very blokey singalong with the players. The finished product, Back Home, ended up sounding like Dad’s Army meets the Four Seasons, but the record-buying public loved it. It topped the charts, and the squad got their spot singing on the telly. 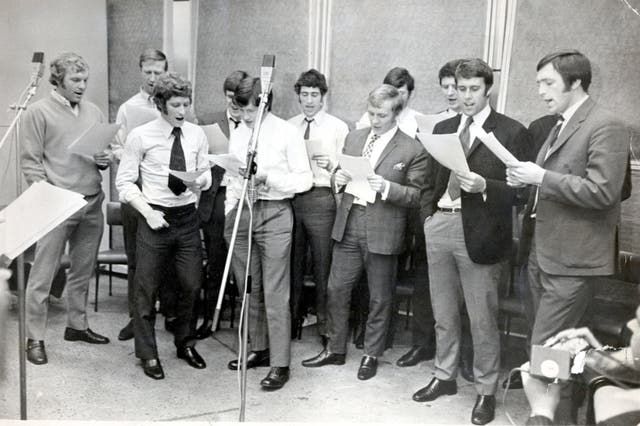 At the tournament itself, England were sent, ahem, back home earlier than hoped, knocked out in the quarter final, and they didn’t reach another World Cup for the rest of the Seventies. By the time they returned to the global stage in 1982, the mood of the corresponding song was a little different. This Time (We’ll Get It Right) was the slightly sheepish title, but with Kevin Keegan leading the vocals (in 1979, he’d had a top 10 hit in Germany, where was he playing at the time, with the song Head Over Heels In Love), it got to number two in the UK.

Alas, England were eliminated at the group stage without scoring a single goal. At the next two major tournaments, the songs’ chart performances matched the on-pitch misfires, not even cracking the top 50. It was all dire — as Maradona saw off the English challenge in ‘86, it was soundtracked by a lacklustre reworking of He’s Got The Whole World In His Hands, and as Lineker and co finished dead bottom of their group in ‘88, all that was left to comfort us was the identikit synth-pop of All The Way.

But then Italia ‘90 happened, and fortunes turned. Bobby Robson’s squad made it to the semis, the furthest they’d gone since 1966. Back in England, the public mood switched from shrugging indifference to intoxicated belief. And it was all captured by the official song, New Order’s World In Motion.

This was a different kind of football tune. For one, it was a good song made by a cool band, ensconced as they were within the loved-up Haçienda scene. It was also mercifully free of any singing footballers, bar John Barnes, whose rap towards the end has risen to cult status in the years since.

Gone were the faintly jingoistic professions of certain victory; in were the optimistic, tongue-in-cheek lyrics (“Arrivederci, it’s one on one”). There was a subtle but purposeful anti-hooligan message, as well, with the band insisting on keeping the hook as “Love’s got the world in motion”, rather than “We’ve got the world...”, as the FA wanted it. There was even a No Alla Violenza remix by Terry Farley and Andrew Weatherall, in reference to the peace-keeping motto that became synonymous with the tournament. 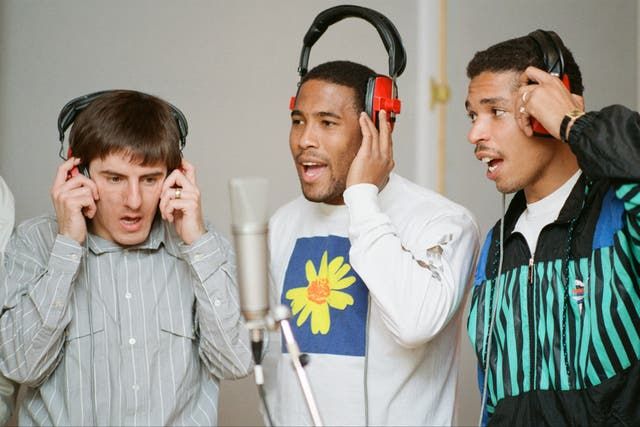 Peter Beardsley, John Barnes and Des Walker during the recording of World In Motion

World In Motion was New Order’s only ever UK number one and kickstarted a short but golden era. Six years later, Baddiel and Skinner captured the imagination with their Lightning Seeds collaboration, as England got to another semi final, this time on home soil. Three Lions was a number one hit at the time — riding on the crest of the Britpop wave, it was the perfect vehicle to carry the fervour of an English-hosted tournament — and followed the New Order rules: great songwriting, lyrics that don’t take themselves seriously, and no singing footballers.

Over the next couple of decades everyone from Ant and Dec to James Corden and Dizzee Rascal had a bash at doing a song, with some decent chart results. There have also been plenty of unofficial offerings, from Vindaloo by Fat Les in 1998 to ex-manager Terry Venables’ jazzy effort England Crazy in 2002. But nothing has captured lightning in the bottle in the same way as Three Lions. It has become a perma-anthem and in 2018, as England once again got to a World Cup semi final, the song hit number one 22 years after its initial release. 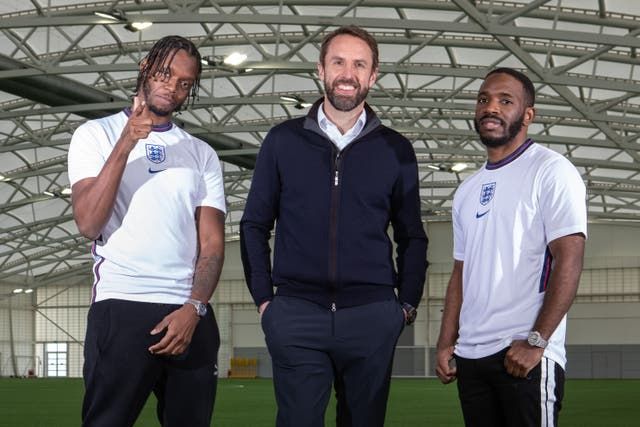 Its never-ending popularity might be part of the reason why there hasn’t been an official England song since 2014. That will change in 2021, with Krept and Konan releasing a track in time for the Euros. As explained in the duo’s BBC documentary about the making of the song, the south Londoners will once again reinvent the form — delivering a rap anthem that celebrates a historically diverse, excitingly young team, and the multicultural nation they represent. If there’s anything to resurrect the lost art of the football song, this may well be it.