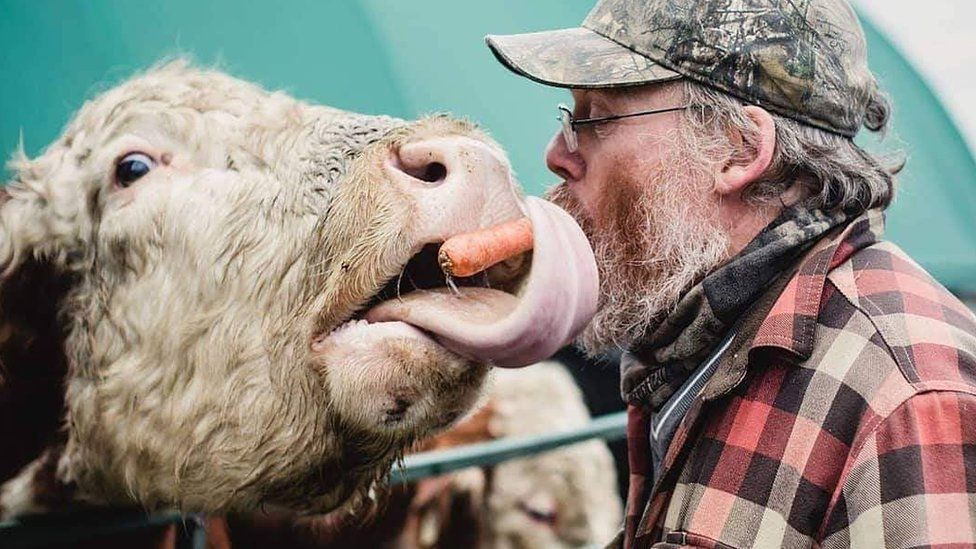 The meat and dairy farmers who are going vegan

It was after Laurence Candy lost most of his dairy herd to bovine tuberculosis that he decided he would no longer send animals to the slaughterhouse. 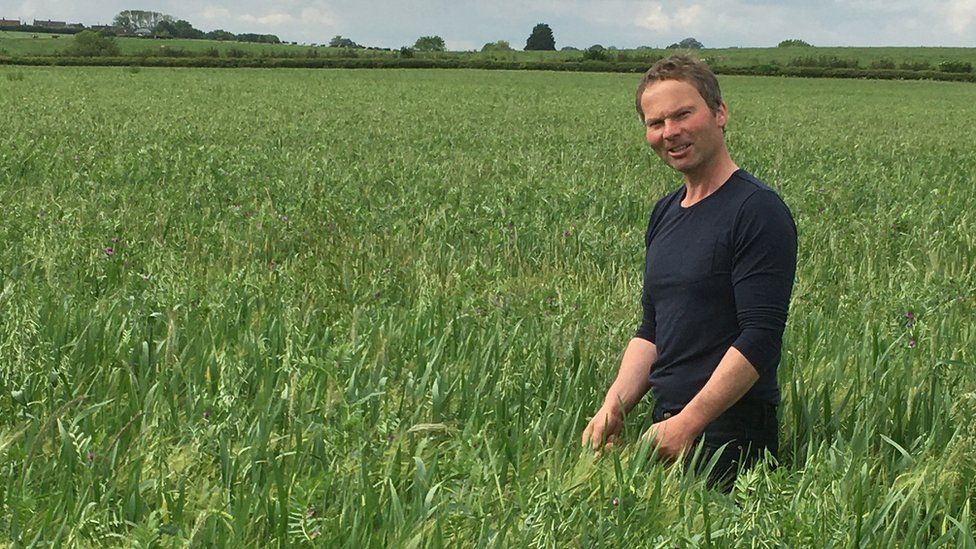 Laurence Candy is not only giving up farming animals, he is looking to get vegan accreditation

"It made me wonder if we can justify the industrial slaughter of sentient beings," says the 50-year-old looking back on the event in 2017. "As a society, we have to question this."

Since last year, Mr Candy has been working with a Scottish-based organisation called Farmers For Stock-Free Farming (FFSFF), which has been set up to support meat and dairy farmers who want to transition to animal-free agriculture.

He is now in the process of selling his remaining animals - 35 beef cattle - and concentrating instead on growing cereals such as oat, wheat, barley and broad beans.

Mr Candy is also switching to "veganic production", which prohibits the use of manure, or any other animal product, to improve the soil. For this, he is working with a body called International Biocyclic Vegan Network, which promotes and certifies plant-based, organic farms around the world.

"It allows for two years to transition out of a livestock enterprise and establish suitable alternatives," he says. "This approach enables the farmer to have a suitable timescale to develop their business plans, without a financial impact." 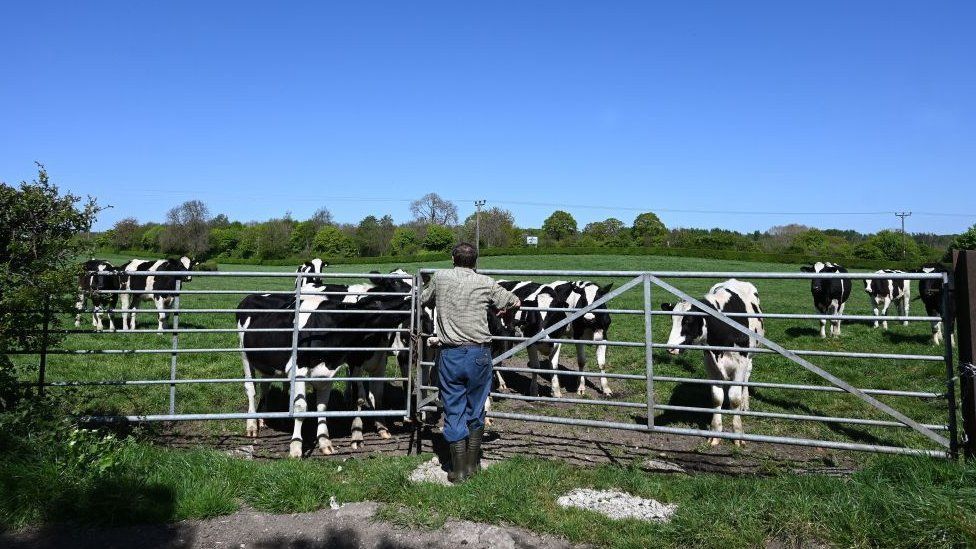 The statistics bear out his comments. The number of vegans in Britain quadrupled between 2014 and 2019, according to a survey for the Vegan Society.

Meanwhile, almost half (49%) of Britons are now limiting their meat consumption, or not eating it at all, found research this year from market research group Mintel. This was up from 41% in 2020.

It comes at the same time as the National Food Strategy, an independent review, said last year that the UK's current appetite for meat was "unsustainable". It concluded that intake needed to fall by 30% to help improve the environment.

This call to reduce meat consumption, and a parallel increased interest in veganism, is replicated around the world.

In Canada, Mark Lanigan decided to give up his farm in Ontario, in 2016, when a calf was born three months premature, and he spent all day trying to keep it alive. "I had an epiphany," says the 65-year-old.

Instead of sending his animals to slaughter, he decided to set up an animal sanctuary. "It wasn't something that was planned, or talked about, it just happened really quickly."

While his Farmhouse Garden Animal Home currently has 28 cows, one horse, a donkey, and chickens and ducks, Mr Lanigan is also focused on selling vegetables such as radishes, cabbages, and beets.

"It's been a major transition," he says. "My sons were going to take over the farm. They thought I was nuts."

His decision also caused friction with the local farming community. "It's been difficult," says Mr Lanigan. "My neighbours don't talk to me. They think I'm anti-farming.

"But I can speak on both sides of the fence. I can talk to animal activists and beef farmers with an open mind."

FFSFF advises farmers wishing to give up animals to explore a number of revenue streams rather than just growing crops. For example, it suggests they set up a glamping business- offering upscale campsites. At the same time, it encourages them to plant more trees and restore ecosystems.

"UK farmers have been in a terrible position for some time," says Rebecca Knowles, executive director of FFSFF. "The price of produce can be so low, there's the devastating environmental impact, the departure from European Union, and changing consumption preferences. 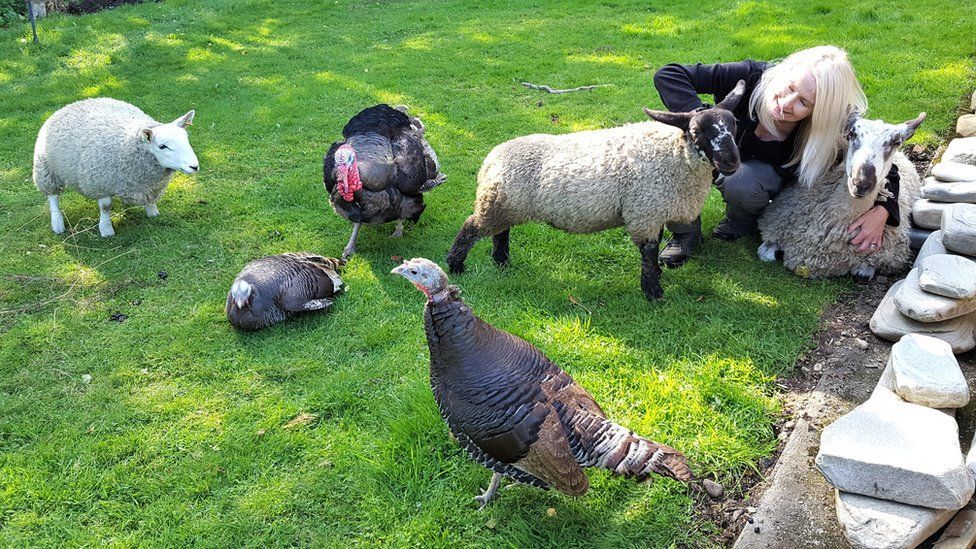 Rebecca Knowles says that the UK's farmers are struggling, and that going vegan may be the solution

"We know we need to reduce livestock to meet climate change goals... we're seeing farmers here in Scotland reach out to us; one sheep farmer contacted us worried about methane emissions from sheep [asking] what options are there for me, another for ethical reasons."

"The whole reason I set up the business was to stop animal exploitation," says founder Geraldine Stark. "[And] we heard a lot of stories of how farmers were struggling, and thought how can we work together."

Refarm'd says it has, so far, worked with several farms in the UK and Switzerland to provide them with equipment and recipes.

However the transition isn't always plain sailing. Claudia Troxler, 37, and her husband Beat, run a farm in Switzerland. In 2020 they shifted from dairy farming to producing oatmeal water, which they tried to sell nationwide. 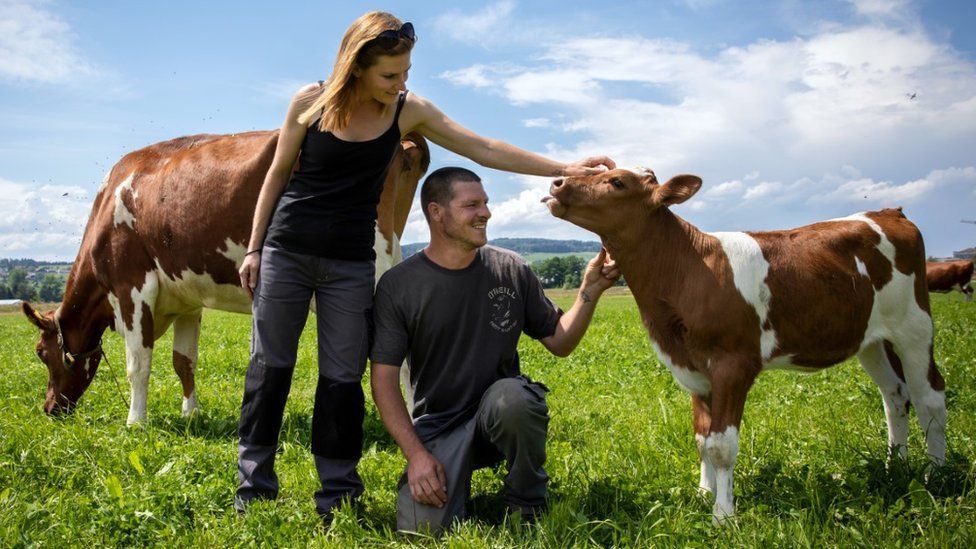 Yet, by the end of last year Ms Troxler says they decided to scale back production as it was taking "an enormous amount of time" to deliver to organic shops across Switzerland. They now instead, sell only from their farm shop.

Dr Nicola Cannon, associate professor of agriculture at the Royal Agricultural University, says it's not surprising dairy and cattle farmers may be considering going animal-free.

"The farming sector, especially the dairy industry, is struggling to meet the labour requirements at the moment, and what with the meat sector's ageing agricultural population, the crop sector is generally less intensive," she says.

"They're [also] being driven to reduce greenhouse gas emissions. It's difficult for the livestock sector as they're burping and farting methane... it might make people think of moving to a simpler system and a plant-based system, where they've got more control of emissions." 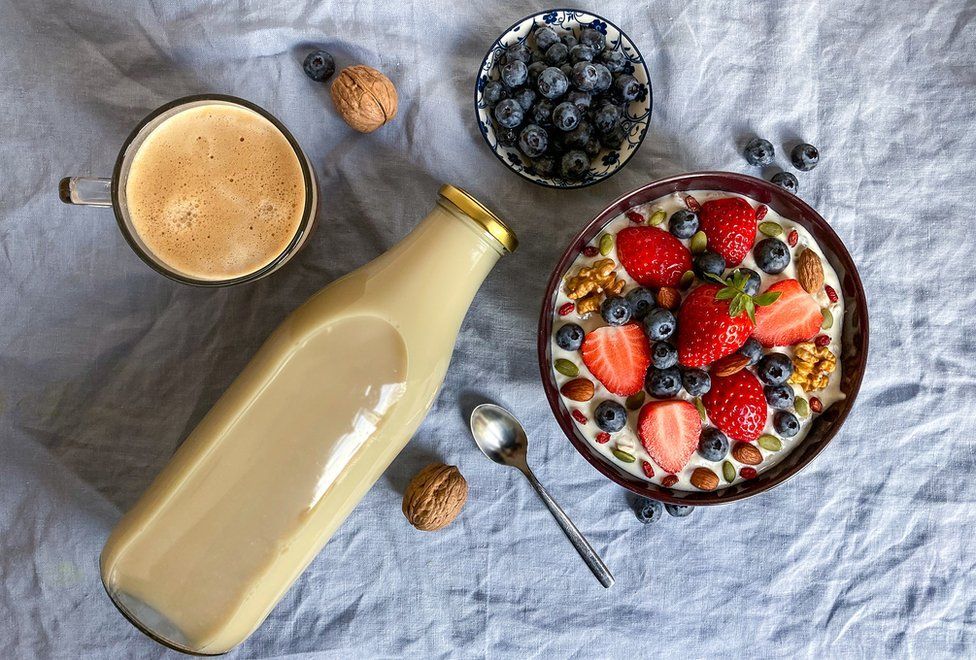 However, Di Wastenage, chairman of UK charity Royal Association of British Dairy Farmers, says: "We are not aware of farmers moving away from dairy and meat production, for other organic and plant-based crops.

"British dairy farmers are proud to produce healthy and nutritious products with a high nutritional density, meaning relatively small quantities of dairy help fulfil dietary needs. [And] the total amount of carbon emitted to meet the nutritional needs may be lower when consuming dairy, versus alternatives.

"Dairy farmers are also taking proactive steps to reduce emissions by adopting regenerative farming principles and pasture systems, which are helping drive down emissions by sequestering carbon with diverse swards [areas of grassland] and legumes."