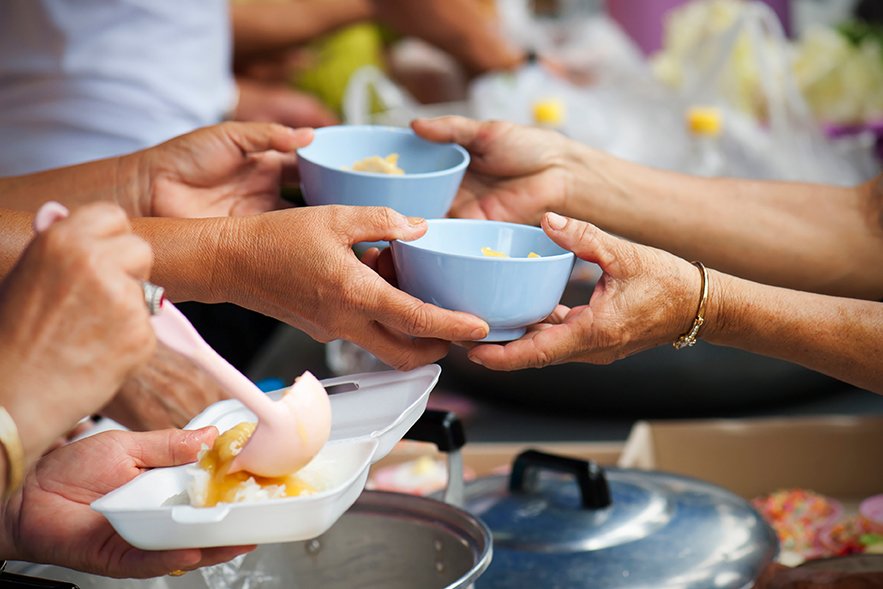 The church keeps feeding the hungry, but funding is needed to continue

More than 160 meals are served by the church each day. Co-ordinator David Thompson believes that demand will be even greater at the end of this month, when it’s expected the programme’s financing will be cut.

“We’re in the first phase of this four-step recovery, but, let’s say – the tourism industry for instance – the hotels won’t open until the airport opens, and that’s not til the fourth phase and they’ve got things sorted out as to how they’re going to deal with people flying back into Bermuda.

“Those jobs associated with the hotel industry and tourism aren’t going to happen overnight.

“It’s going to be June, July before that starts – and that’s depending on airlift. Those are the scary things. So what happens at the end of May if we stop the programme?”

Christ Church ran a similar scheme on a smaller scale for eight years out of its Middle Road, Warwick premises.

Until Covid-19 hit Bermuda, Loads of Love did laundry for homeless and needy people and gave them a place to shower and a free breakfast every Saturday.

It built on that when it joined the island-wide feeding programme initiated by The Loren at Pink Beach on April 1. With financing from the private sector, the Hamilton Parish resort provides 1,000 meals each day.

Thirty of those go to Christ Church, where volunteers cook and box roughly 136 more.

The church has also kept up with its laundry services, with loads taken to and from the vulnerable shelter at CedarBridge Academy every other day.

Mr Thompson is at the heart of the effort.

An elder at Christ Church, a congregation of the Presbyterian Church of Scotland, he is also co-chairman of its outreach programme that aids needy people here and abroad.

“Before the Covid virus we were feeding about 30 to 40 people for breakfast and we were doing about, maybe 15 loads of laundry,” he said. “When Covid came along it seemed a natural progression.

“We automatically just kind of segued into making that distribution on a daily basis but we quickly found that there was more demand than there was food available.

“We started giving out some food vouchers and food, but as the demand grew we decided ‘look, we’ve got a full working kitchen at the church, let’s make food’. And so we started cooking.”

The food is either donated, or bought from wholesalers.

Meal preparation is led by an actual chef who gets assistance from a relatively small group of “four or five”, so social-distancing measures can be put into play.

Three cars head out on three routes through Warwick every day, each carrying a driver and a navigator.

“We’re distributing about 95 meals, actually delivering them to people’s homes,” Mr Thompson said. “The rest, people come and pick up. It’s been quite a shock for us all to appreciate just how much need there is.”

Clear to the volunteers is that “a high concentration” of people in Warwick have lost their jobs.

“They’re calling us out of desperation. I’ve had phone calls from people, they start off by saying, ‘I have to swallow a lot of pride, but I need to beg for food.’

When people start talking like that you know it’s genuine. There’s a great need. They’ve run out of all their options.

“They’ve either spent their savings or they’re living, like so many people, on a hand-to-mouth situation where when the paycheque dries up, there’s no money and then they have to decide what to do.”

Many of those they help are seniors who had depended on the now reduced Meals on Wheels service.

They’ve also seen young families who “are getting desperate”, and single parents.

“Obviously, we get a lot of satisfaction out of being able to feel that we’re making a difference, but yes, it is depressing,” Mr Thompson said. “It’s scary to see how many people there are out there in need; how, when a crisis like this comes along, how few people really have any kind of reserve to deal with it, there’s no financial or any other kind of support system that can help them overcome the situation.”

With that as a backdrop the future is “frightening”.

For the programme to continue past its end date of May 29, Christ Church will need help.

“I’m assuming that our volunteers who have jobs will want to start going back to their jobs,” said Mr Thompson, explaining the effort takes roughly five hours a day, seven days a week.

“We’ve received donations from the third sector to support our work and we’ve had generous support from members of our congregation and outside, but will that continue?

“Will it go on long enough to keep the programme going until we have a situation where people can start working again and earning income?

“That’s a big question mark. It’s a difficult situation to understand and to get to grips with.”

Added to that is the uncertainty over whether or not the disease has “spiked yet”.

Mr Thompson said: “I’m worried it will continue, that people will dig deeper and deeper into their savings and then realise this will go on much longer than anybody anticipated.

“That’s the frightening part now, the really scary part. Even Government’s coffers aren’t that deep that they can continue to give support to the unemployed.”