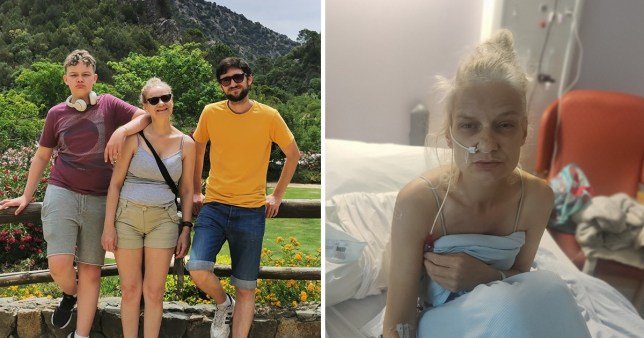 Towards the beginning of the coronavirus pandemic in March, Jackie Johnson, 50, tried to see a doctor several times when she had difficulty eating.

She was told by medics that she had acid reflux and was given antacids, according to the Daily Record.

The mother-of-two from Kirkcaldy only discovered the extent of her condition after reading the notes a nurse left behind when she was later taken to hospital.

She found out that she had a stage four tumour and that the cancer had metastasized into the lymph node – despite never having a biopsy of her lymph nodes – in the notes, which had ‘patient unaware’ written underneath.

Eventually, Jackie was diagnosed with stage four cancer of the oesophagus and told that the only available treatment would be a palliative chemotherapy treatment.

Her partner Colin Stewart, 49, told the paper: ‘Jackie asked the GP if she could have cancer but he said no and told her she had a ‘classic case of acid reflux. But no one had ever examined her.’

He added: ‘Jackie called over a doctor and he was embarrassed she had found out like that. He confirmed what she had read and then, Jackie, ran away.’

During her first appointment at her local GP surgery after developing eating problems, she was diagnosed with acid reflux and prescribed antacids without any examination.

Two weeks later, Jackie called again but this time was given a telephone consultation where the doctor doubled her original medication.

However, Jackie was still not convinced that this was the right treatment and called back two weeks later to be given another telephone appointment and more medication, with still no in-person examination of her throat.

Fearing her condition was getting worse, she called the surgery a fourth time and asked to be referred for an endoscopy, suspecting she had cancer.

Colin Stewart, her partner, said no one ever examined Jackie before prescribing antacids

As her condition worsened, Jackie waited eight weeks during lockdown to get an appointment at an endoscopy clinic.

Her appointment on July 9 confirmed her fears that there was a growth and six days later they confirmed it was cancer.

Colin explained: ‘They told her it was terminal and she was going to have palliative treatment.

‘But for her to be able to swallow the chemotherapy medication, they would have to put in a stent to open up her oesophagus.

‘They told us it would be permanent and even if the chemotherapy shrunk the tumour they would not be able to operate because of the stent.

‘We asked them to hold off doing it because we wanted a second opinion. But when they got the second opinion they said it was the same as their own.’

After scouring the internet, the couple found a private consultant who may be able to cure her depending on the results of a PET scan.

They hopes that the treatment can be done in Scotland but if not are looking into selling Jackie’s house and have created a GoFundme page.

The Scottish Labour Health and Social Care minister has said: ‘Cancer doesn’t wait and that’s why being examined by a GP and getting an early diagnosis is so vital.

‘We face a tsunami of cancer deaths unless the Scottish Government lifts our NHS out of lockdown and properly resources our healthcare services.’