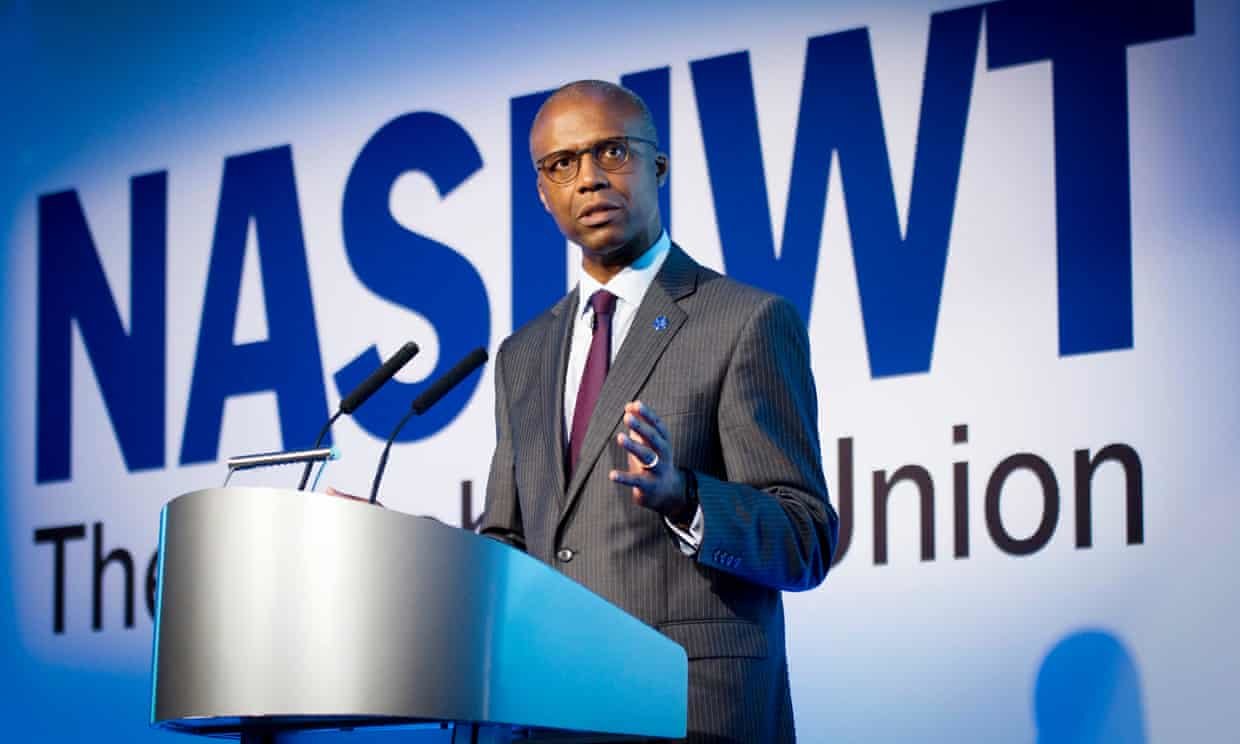 NASUWT threatens legal action to defend teachers against forced restart on 1 June
Teachers can legally refuse to return when schools reopen unless they get the same protections against coronavirus as other frontline staff, one of the UK’s leading teaching unions has warned.

In a letter to local authorities seen by the Guardian, the 300,000-strong NASUWT threatens to invoke legal action to defend teachers against being forced back into schools on 1 June because of the risk to their health.

The union’s letter marks a significant hardening against the government’s push to reopen primary schools in England from 1 June. It comes as one academy chain says it is aiming to invite pupils back on that date.

Signed by the NASUWT’s general secretary, Patrick Roach, the union’s letter threatens to delay that start date by forcing the government and local authorities to consider their legal obligations.

The union says it has “fundamental concerns” about guidance issued by the government this week, saying it was inconsistent with guidance given to other workplaces, including care homes and the NHS.

“Stringent guidance has been issued for the NHS, for care homes and for employers across the UK. It is unacceptable that this has not been the case for schools,” it says.

“The NASUWT believes that teachers and other school staff have the right to the same consideration and protections, and to be confident that their health and welfare, as well as that of pupils, is at the heart of any planning for wider opening.”

The union said it had to warn local authorities as employers, and the government, that they risked legal action for “breach of duty of care and personal injury due to foreseeable risk, and any other legal recourse available” if efforts were made to force teachers into classrooms during the epidemic.

“The NASUWT recognises that schools and employers have been placed in a situation where the wrong decision will result in people becoming seriously ill and dying, and will therefore appreciate that there can be no compromise on health and safety.

“If this means that schools are unable to open safely before September, because they are unable to make arrangements to safeguard their staff and pupils, then that position must be accepted,” Roach said.

It comes as councils in England call for the power to close schools and nurseries to protect vulnerable families in the event of local Covid-19 outbreaks, as pressure grows on the government to reveal its scientific evidence on transmission.

The Local Government Association (LGA) – which represents nearly all of England’s councils – says that “local flexibility” is needed to reopen primary schools, as well as the ability to close them if testing reveals clusters of new Covid-19 infections.

The association said a major concern was the likely impact in areas with more vulnerable residents, including “communities where there is higher risk, such as those with a high proportion of black, Asian and minority ethnic residents”.

Judith Blake, the chair of the LGA’s children and young people board, said: “Councils need to be able to close provision where testing indicates clusters of new Covid-19 cases and it is vital that schools have the resources to provide staff with necessary protective equipment, as well as soap and hand sanitiser for cleaning.”

Giving power over closures to local authorities has been pushed for by both the main teaching unions.

“The Department for Education (DfE) has not done nearly enough thinking about the emerging evidence about the racial disparities of the epidemic and what it means for schools with diverse pupil populations,” said Mary Bousted, the joint general secretary of the National Education Union.

Gavin Williamson, the education secretary, told MPs earlier this week that the scientific advice would be published, but did not give a deadline.

The government is holding a briefing for education sector leaders on Friday with leading advisers – expected to include Chris Whitty, the chief medical officer, and Sir Patrick Vallance, the chief scientific adviser, alongside Russell Viner, the president of the Royal College of Paediatrics and Child Health, and other experts.

Representatives from the teaching unions and sector bodies have been invited to the briefing to submit questions, as the government hopes to convince key figures that it will be safe to reopen primary schools, initially to reception, year one and year six pupils on 1 June.

The governments in Wales and Scotland have so far refused to follow England’s decision, meaning their schools will remain closed into next month.

Heads have been advised by the DfE that they should prioritise the early years pupils, ahead of those in year six, if their facilities do not allow safe operation.

While many heads say they remain unsure about reopening, the Oasis academy chain said it was expecting to reopen its 30 primary and all-through schools on 1 June. Some independent schools have also told parents that they intend to reopen at the start of June.
#Coronavirus  #COVID-19  #Covid
Add Comment