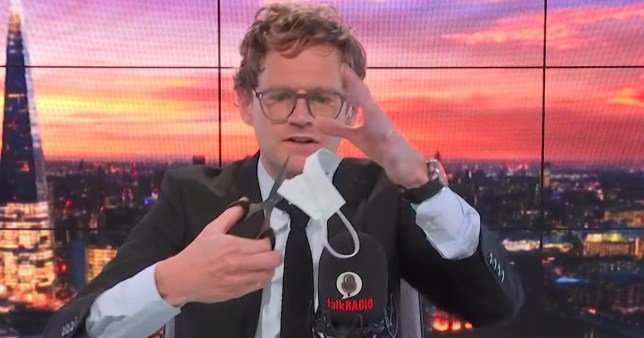 A Talk Radio host has cut up his face mask live on air, saying it’s the ‘only way’ to get the country back to normal.

Mark Dolan’s actions have sparked a torrent of comments on social media after more than a million people watched a clip of him venting his frustration at face coverings.

The presenter told his listeners: ‘If you want to save lives and get the country back on track, the only option is to get back to normal.

‘The first step to achieving that is to get rid of these wretched, god awful, damned, blinking, uncomfortable, scientifically empty, useless masks.’

The findings of a study by the University of Edinburgh released last month found face coverings do lower the risk of spreading Covid-19 to others by reducing the number of droplets released into the air when a person is speaking or coughing.

It was one of many studies published recently that show covering your mouth and nose is an effective way of stopping the spread of the virus.

Despite this, a vocal anti-mask lobby is building momentum in the UK. There have been several protests across towns and cities organised by anti-mask, anti-lockdown groups.

Mark Dolan cuts up his face mask live on air: “If you want to save lives and get the country back on track, the only option is to get back to normal. The first step to achieving that is binning these wretched masks”.Watch live âº https://t.co/wmroLr0b36 | @mrmarkdolan pic.twitter.com/EnK4olEadq— talkRADIO (@talkRADIO) September 4, 2020

Masks have been mandatory on public transport and in shops and other confined spaces for the last few months.

Some schools asked their pupils to wear one in communal areas as they reopened this week.

Several people on Twitter responded to a video shared by the official Talk Radio feed saying they agreed masks were ‘dehumanising’ and ‘depressing’.

He said the case for wearing a mask was ‘scientifically empty’

Other boasted that they had never worn one while another person said they ‘wouldn’t be stepping foot’ inside a shop until the ‘mask tyranny’ is over.

But some braved the wrath of the anti-maskers to defend the Government’s policy.

One person tweeted: ‘Just wear the mask, it’s not a great ask. If it opens up business and socialising quicker, all the better.’

Another said: ‘Mate, it’s a little piece of material that you wear every now and again that might save someone’s life. It’s not a balaclava made of wasps. God help us if there’s a war.’

Argus 413 days ago
Oh poor you. Quit being a whiny little baby, you wimp. Just wear the damn mask and help everyone get through this.
View all comments (1)Add comment