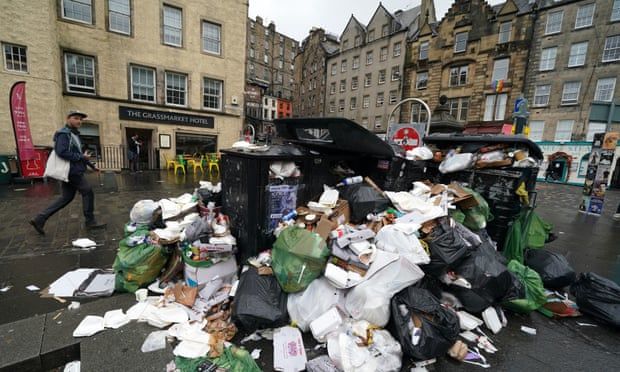 Sturgeon accused of being ‘asleep at the wheel’ over bin strike

Scottish Tories call for first minister to focus on pay dispute that now threatens early closures of schools
Nicola Sturgeon has been accused of favouring foreign trips and book festival appearances over resolving an ongoing industrial dispute that had led to rubbish piled high on the streets of Scotland’s major cities.

Talks are resuming on Friday to resolve the strikes that have left bins overflowing and piles of food waste accumulating in Edinburgh, where crowds have gathered for the August festivals.

Refuse workers in Scotland’s capital are midway through a two-week strike, as part of an almost nationwide pay dispute with local authorities, while staff across more local authorities took industrial action on Wednesday and others joined them on Friday, affecting cities including Aberdeen, Glasgow and Dundee as well as rural areas including the Highlands, Orkney and Angus.

With unions planning up to eight more days of strikes to waste services in the September, Glasgow city council announced that all primary schools, additional support needs facilities and nurseries would shut across three days early next month because of industrial action by cleaning, janitorial, catering and pupil support workers, with more councils expected to follow.

As the first minister travelled to Copenhagen on Friday to officially open the Scottish government’s Nordic office, opposition politicians questioned her commitment to resolving the disputes after she made a number of appearances at the Edinburgh festivals, with plans to interview Succession actor Brian Cox on Monday.

Sharon Dowey, the shadow minister for culture, Europe and international development for the Scottish Conservatives, said: “Once again, Nicola Sturgeon’s been caught asleep at the country’s wheel while rubbish is piling up on streets across the country.

“It’s ridiculous that she has chosen this moment to go gallivanting around northern Europe before nipping back for a spot of self-promotion at Edinburgh’s book festival. The SNP government’s role is to ensure the country runs smoothly and efficiently.”

Scottish Labour’s business manager, Neil Bibby, added: “It’s no wonder Nicola Sturgeon wants a break from Scotland’s litter-strewn streets, but most Scots don’t have that luxury. Whether she’s in Scotland or abroad, she has been missing in action this entire cost of living crisis.

“The first minister needs to fund councils properly and secure a fair deal for council workers and bring an end to this chaos, as well as using the powers she has to help Scots struggling with soaring bills.”

The three unions, Unison, Unite and GMB, have accused the Convention of Scottish Local Authorities (Cosla), the SNP-led umbrella group for Scotland’s 32 councils, of failing to grasp the severity of the cost of living crisis. They are urging councils to agree to a £3,000 flat-rate pay award, which they argue would significantly help lower-paid workers, rather than a percentage increase that would unfairly benefit highest paid staff.

Unite industrial officer Wendy Dunsmore said the action was a direct response to failures by Cosla and the Scottish government to appreciate the gravity of the disputes.

She said: “Unite will now deepen and spread our strike action across two thirds of the country. It’s a disgrace that schools and early years services now face closure causing further disruption to families. The politicians need to get a grip of this situation which they have let happen due to their politicking and stalling.”

While the dispute centres on local government, union officials say the Scottish government must take more responsibility for the impact of its council funding cuts. Unite officials suggested on Wednesday that the deputy first minister, John Swinney, who recently gave councils an extra £140m to help fund a better pay offer, was engaging with Cosla about ending some ringfencing to free up more funds for an improved deal.

Meanwhile, Scotland’s largest teaching union, the Educational Institute of Scotland, announced on Thursday its intention to ballot members on strike action after rejecting a 5% pay offer from Cosla.
Add Comment