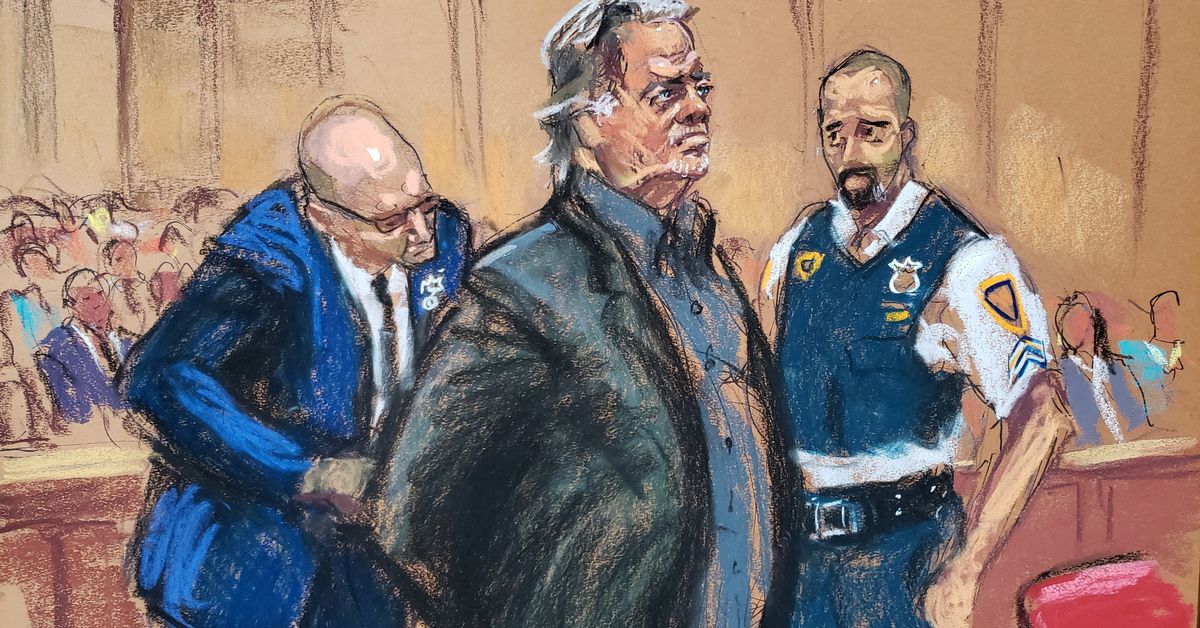 Steve Bannon, the onetime top strategist to former U.S. President Donald Trump, pleaded not guilty on Thursday to money laundering and conspiracy charges for allegedly deceiving donors to an effort to help Trump build a wall along the U.S.-Mexico border.

Bannon, 68, was handcuffed when he came into a New York state court in Manhattan. He was released without bail after his lawyer David Schoen entered the plea on his behalf.

Prosecutors accused Bannon of defrauding donors who contributed more than $15 million to a private fundraising drive, known as "We Build the Wall," for the former Republican president's signature wall.

According to the indictment, Bannon promised donors that all their money would go toward the wall, but concealed his role in diverting hundreds of thousands of dollars to the drive's chief executive, who had promised to take no salary.

The chief executive has been identified in court papers as Brian Kolfage, an Air Force veteran who pleaded guilty in April to federal wire fraud conspiracy and tax charges, and is awaiting sentencing.

"It is a crime to profit off the backs of donors by making false pretenses," Manhattan District Attorney Alvin Bragg said at a joint press conference with New York Attorney General Letitia James, who worked with him on the probe.

Bannon was charged with two counts of money laundering, three counts of conspiracy and one count of scheming to defraud.

If convicted, he could face up to 15 years in prison for money laundering, though prison is not mandatory.

Thursday's indictment concerns some of the conduct underlying an August 2020 federal prosecution of Bannon, Kolfage and two other men.

Bannon pleaded not guilty in that case, which ended abruptly in January 2021 when Trump pardoned him in the final hours of his presidency.

James and Bragg, both Democrats, have also been investigating Trump and his businesses.

After being released, Bannon told reporters outside the courthouse that the charges were politically motivated, noting they came two months before the November elections.

"I've got news for them," he said, referring to prosecutors. "We are going to win a sweeping landslide at every level, from school boards to election officials... We are not going to back down and they will not be able to shut me up."

Bannon's lawyer Schoen stood by his side and called the charges a "carbon copy" of the federal case, and said Bannon would fight "all the way through."

Bannon's next court appearance was scheduled for Oct. 4.

His message was different five months later, according to the indictment, when he told prospective donors at a fundraiser: "Remember, all the money you give goes to building the wall."

Lawyers for Kolfage and Badolato did not immediately respond to requests for comment. A trial of the fourth defendant in the federal case, Timothy Shea, ended in a mistrial.

Bannon is not the first Trump ally charged in federal and state court.

In March 2019, Vance brought fraud charges against former Trump campaign chairman Paul Manafort that were similar to federal charges on which Manafort had been convicted and sentenced to 7-1/2 years in prison.

But a New York judge dismissed the state charges nine months later because they amounted to double jeopardy.

Double jeopardy may not apply to the Bannon case because he never went to trial on the federal charges.