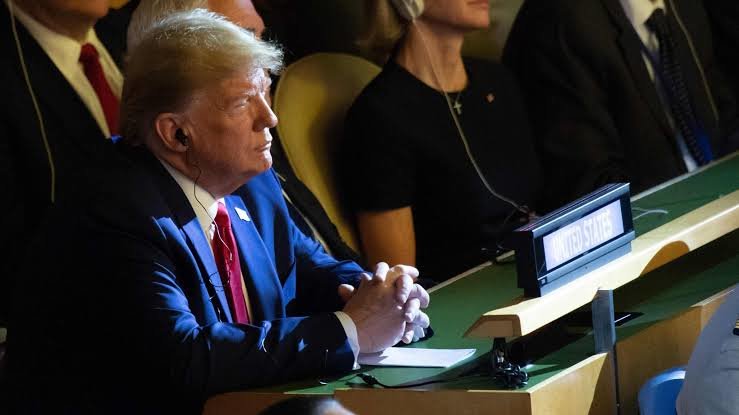 The president signed a law supporting the protesters and ordering sanctions for human rights violations. Kevin Lam, a pro-democracy activist elected to the district council, details reactions there.

China's foreign ministry is threatening to retaliate against the United States over two new laws signed by President Trump, laws that support the pro-democracy movement in Hong Kong. One of them bans the sale of American-made tear gas and other products used to control crowds. The other allows the U.S. to sanction Chinese or Hong Kong officials who carry out human rights violations in Hong Kong. NPR's Beijing correspondent Emily Feng is covering this for us and joins us now. Good morning, Emily.

MARTIN: So we've heard kind of these general threats from the central government in Beijing. What specifically is their critique here?

FENG: The critique is that the U.S. is meddling in internal affairs. China sees Hong Kong as part of China. And these bills are seen as the U.S. inserting itself into something that it has no business in. And so China has said that it will pursue, quote, "counter measures." But as you describe, that's incredibly vague, and they've made such threats before. The truth is, though, there is little Beijing could do. Hu Xijin, who is a very outspoken editor of a prominent Chinese state tabloid, has suggested minor retaliation methods, such as punishing U.S, quote, "proxies" in Hong Kong - again very general - or putting the lawmakers who drafted those two bills on a no-entry-to-China list. But there's no sign that those measures will actually happen. My own prediction is that Beijing will first see how aggressively the U.S. enforces these two bills before calibrating how it itself reacts.

But one thing I think that should be noted is President Trump signing these two bills further enforces this widely held belief in China that somehow the United Kingdom and the United States are directly behind these ongoing protests in Hong Kong. This is not just a conspiracy theory that is being used as public propaganda in China. Senior Chinese officials I've spoken to genuinely believe that the Hong Kong protests are the work of the U.S.

MARTIN: So, I mean, the context of all this is, of course, the ongoing trade negotiations between the U.S. and China. How is this going to affect that?

FENG: If we believe both sides, there should be no impact. The U.S. official position is very clear that trade and human rights in Hong Kong are two separate issues. Though President Trump did waffle last week about whether he would sign either bill because he was concerned it might jeopardize his relationship with Chinese President Xi Jinping. China also has given no indication that it links this issue of human rights in Hong Kong with the trade talks. For example, the commerce ministry here, which handles the trade talks, has made zero mention of the Hong Kong bills even though simultaneously their counterparts, the Chinese Ministry of Foreign Affairs, have been vehemently criticizing the U.S. for meddling.

So precedent (ph) tells us that trade talks will go ahead as usual. The U.S. and China have plunged ahead with trade negotiations in the past despite arguably bigger conflicts such as, for example, the arrest and prosecution of a senior Chinese executive at Huawei and actual sanctions on dozens of Chinese firms early this year because of their complicity in the mass detention of Chinese Muslims. Both China and the U.S. want interim trade agreement. And it's really hard to see how these two bills will derail that.

MARTIN: NPR's Emily Feng in Beijing, thank you so much.

MARTIN: So, clearly, the legislation is not being received well in mainland China. The story, though, is different in Hong Kong. Thousands of pro-democracy activists were on the streets yesterday, a number of them carrying American flags. They were there to rally in thanks to the United States and President Trump for this decision to pass these two laws. It's not the only victory for the movement there in the past week. Pro-democracy candidates won in a big way there in local elections recently. Kelvin Lam was one of those candidates. He is with us this morning. Thank you so much for being with us.

MARTIN: Good morning. So from where you sit, can you describe the significance of these two pieces of legislation signed by President Trump?

LAM: I personally think that it is, you know, the best Thanksgiving present ever to Hong Kong. As you noted, there are big rallies in the Edinburgh Square yesterday in Central. And a lot people in Hong Kong actually welcomed the passing and the signing of the acts. We think that, you know, this act will serve as a deterrent by sanctioning those who violate human rights here or damaging our autonomy. The act will actually also make sure that the government leaders act in the interests of Hongkongers and not those of Beijing or, even worse, their own political career in China. From an economic perspective, I personally think that if the leaders are acting in Hong Kong's interests to maintain a high degree of autonomy and the rule of law, also maintaining the firewall in the legal system between Hong Kong and China, it actually gives confidence for foreign businesses to operate here in Hong Kong. And therefore, the status of Hong Kong as a business and international financial center wouldn't be impaired as a result.

MARTIN: So what Emily mentioned there, though, that the laws that the president of the United States has signed, that this just adds fuel to the conspiracy theory that it's all an American project. Are you worried about that suggestion and that these bills just exacerbate things?

LAM: First, I don't believe that it is - I mean, the entire movement protest is driven by foreign forces, as the prime ministers have said. If you look back at what happened in 1989, the Tiananmen Square massacre back then, they also used similar logic to explain why the movement erupted in the first place. So it's a typical communist way of doing this kind of political propaganda. And from our perspective as a Hongkonger, we knew perfectly well that with our forces alone, we can't fight the Chinese authorities without the help from other countries. And this act is actually domestic affairs of the United States. And I think that that will actually help Hongkongers to fight for more freedom and also stability here in Hong Kong, as well.

MARTIN: Just lastly, are you concerned that because of the political statement made in the recent elections with these wins by you and other pro-democracy candidates, is that likely to further compel China to crack down on any effort to get more democratic freedoms in Hong Kong?

LAM: This is what - the fear that I had right after the election the night that I was trying to think about. I think - personally think - that it is likely that the Chinese would think that democracy is dangerous, that if the people are so against a government, they can vote overwhelmingly for the opposition, and the government lose control. But I think that from a Hongkonger's perspective - that we shouldn't go down without a fight. I think the people of Hong Kong should leverage on the results in this election and ask for more democracy in future and asking the end to police brutality by setting up an independent commission or an inquiry to investigate police conduct and the root causes of the crisis.

MARTIN: Kelvin Lam - he's a newly elected district councilor in Hong Kong. Thank you so much for your time. We appreciate it.

LAM: Thank you very much. Thanks for having me here.
Add Comment