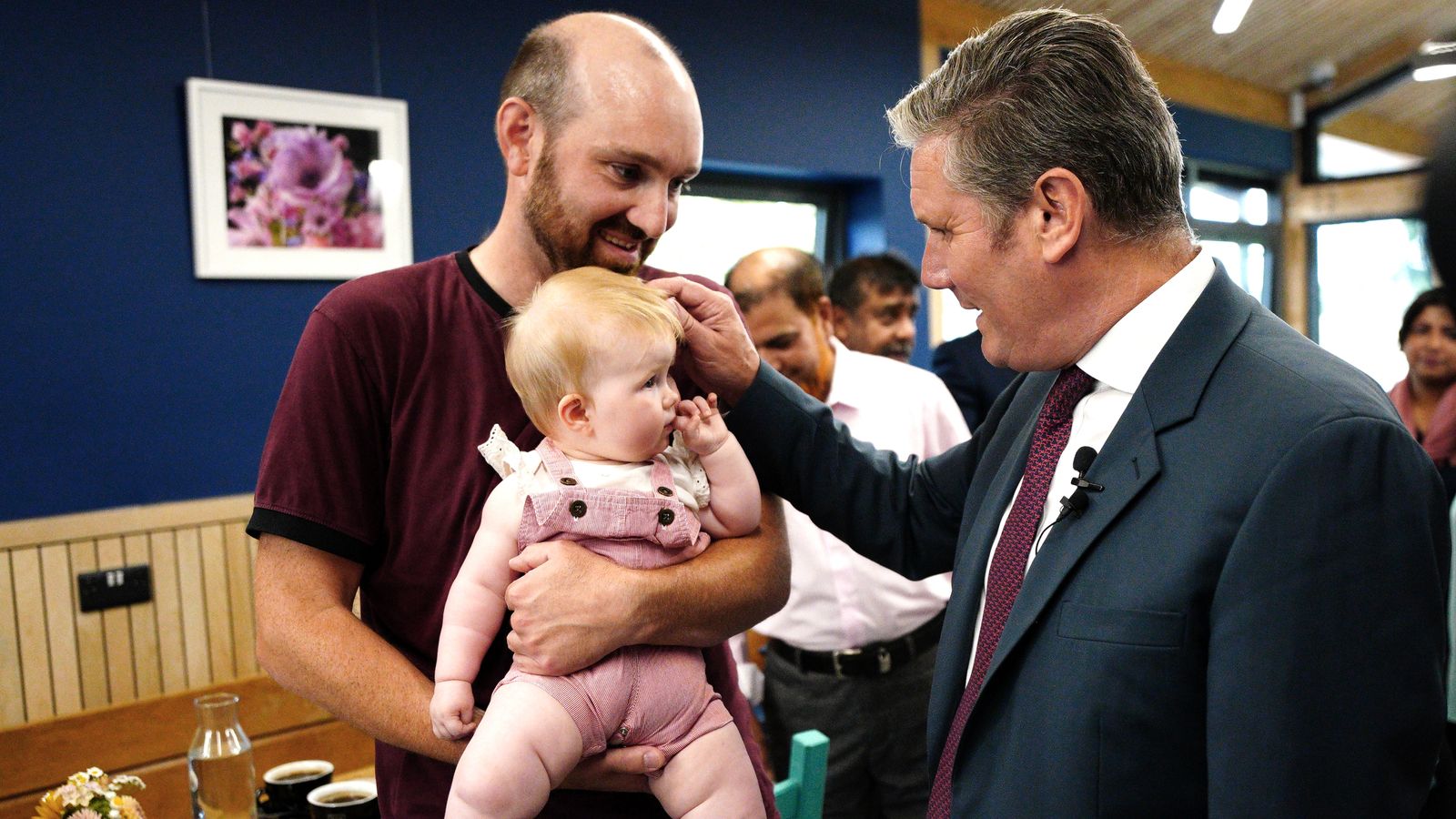 The Labour leader says his party's package of support is aimed at households who will "struggle to pay their bills during this winter" - as the PM's spokesperson says no further interventions to ease cost of living pressures will be made until his successor is appointed on 5 September.

Sir Keir Starmer has said Labour's plan to deal with the "national emergency" of spiralling energy costs is "robust" and a "real answer" to soaring household bills.

The Labour leader said his plan would keep soaring household bills down by freezing the energy price cap and it would be paid for by introducing a new windfall tax on oil and gas companies' profits without a "major tax loophole" the government's windfall tax has.

Speaking in Exeter on Monday, the Labour leader said his "radical" plan "will take us through the winter" and accused the government of "saying absolutely nothing".

He admitted to Sky News he would benefit from the plan as everyone would receive help but said even though he could afford to pay £4,000 in energy bills a year on his salary of about £140,000, the blanket help would help pull down inflation by "about 4%".

"This plan will take us through this winter and there are so many people who are anxious about what's going to happen in the autumn, anxious that they can't pay their bills," Sir Keir said.

"So this is a real answer, a costed answer to them, it's really the opposite of what you've got from the government who are saying absolutely nothing."

"We're saying we'll hold that back, we won't allow those prices to go up and we'll make sure that those that are actually making a lot of profit out of this pay for holding those prices down.

"And that is the sort of plan that I think people are very, very receptive to."

Sir Keir added that the package of support is "primarily aimed at those households who are going to struggle to pay their bills during this winter".

The plan has been criticised for helping everyone with their bills, not just low-income households, but Sir Keir said that would help lower inflation, which is set to rise to more than 12% in October, the Bank of England has said.

But Sir Keir told Sky News: "This is across the board because many, many households are impacted by this.

"It has the massive benefit, but it doesn't allow the price increases to take place in October and January.

"But it has another benefit, which is really important, it reduces inflation by 4% because it's across the board."

He admitted the plan was only for six months "to get us through the winter" and a new plan would be needed in April next year as the situation will most likely have changed by then.

Mr Sunak has unveiled a plan to slash rising energy bills for up to 16 million vulnerable people, which he hopes will propel him to 10 Downing Street.

While Ms Truss has said cutting taxes is the best way to help with living costs over winter - but has dismissed calls for a windfall tax on oil and gas firms' profits.

It came as the PM's official spokesperson confirmed that Mr Johnson is on leave this week and that no further interventions to ease cost of living pressures will be made until his successor is appointed on 5 September.

Energy analysts have predicted that typical energy bills could rise to approximately £3,500 in October and more than £4,200 in January.

While bills are set to cost more than two months of average wages next year unless the government intervenes, a report has suggested.

On Sunday evening, Sir Keir pledged that people would not "pay a penny more" on their winter energy bills and that the party's plans would save the typical family £1,000 immediately, get energy costs under control for the future and help tackle inflation.

The party said this will be achieved by preventing the energy cap from rising this winter, which would be paid for by an extra tax from oil and gas giants.

The price cap, which is the maximum that companies in England, Wales and Scotland can charge an average customer for energy costs, should remain at £1,971.

The plans in Labour's "emergency package" include:

• Freezing the price cap, which the party says will reduce inflation by 4%

• Support for customers not protected by the price cap

• Closing a loophole in the government's energy profits levy

Labour says removing "a major tax loophole" in the windfall tax announced by Rishi Sunak when he was chancellor earlier this year will help to fund its plans.

The party adds that new investment allowances within the policy mean that for every £1 invested, 91.25p will go back to companies in additional tax relief - despite oil and gas producers announcing bumper profits.

Labour says removing these new investment allowances and backdating the start date to January, when the party called for a windfall tax, would raise £8bn, which could ease household living costs.

However, the Institute for Fiscal Studies (IFS) has questioned Labour's explanation as to how it would fund the support package.

The think tank's director Paul Johnson told BBC Radio 4's Today programme that the party's plan to cancel the energy price cap rise - if extended from the proposed six months to a year - would cost as much as the COVID furlough scheme.

The government has announced households will receive £400 to help pay fuel bills this autumn.

The PM admitted on Friday that the plans do not go far enough, but also reiterated his insistence that it is for his successor to "make significant fiscal decisions" after talks with energy bosses ended with no new measures being announced.