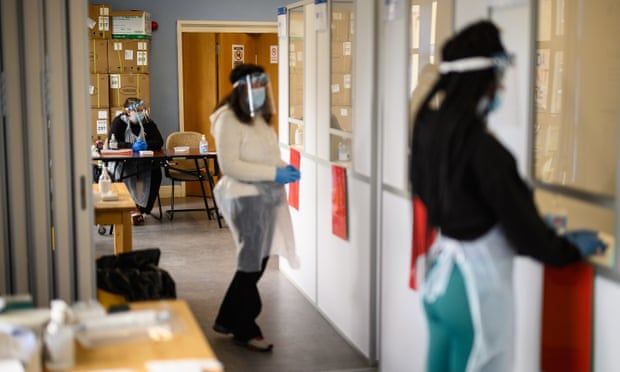 Signs of rise in Covid infections in England amid variant warnings

Boris Johnson still plans to end restrictions in June despite experts’ fears over spread of India and Kent variants
Covid infection levels are showing early signs of an increase in England, data has revealed, as experts continue to warn the variant of concern first detected in India could grow exponentially in the UK.

On Friday Boris Johnson told broadcasters in Portsmouth he has seen nothing to suggest it will be necessary to “deviate from the roadmap”, indicating that the planned lifting of all coronavirus restrictions in England on 21 June may yet go ahead.

However speaking at an online meeting of the Independent Sage group of experts, Prof Ravi Gupta of the University of Cambridge, a co-opted member of the New and Emerging Respiratory Virus Threats Advisory Group, said that despite the UK’s vaccination programme, community spread of the India variant, B.1.617.2, will continue to rise.

“We still have people under the age of 30 not vaccinated, we have many people with only one dose, so this virus has plenty of space to expand exponentially and reach very high levels of infection with quite high levels of morbidity overall,” he said.

His comments came as data from the Office for National Statistics infection survey revealed early signs of a potential rise in the percentage of people testing positive for Covid in England.

“There were early signs of an increase in the percentage of people testing positive in the north-east, Yorkshire and the Humber and the south-east in the week ending 15 May 2021,” the ONS team noted.

By contrast around one in 4,340 people in the community in Wales, one in 1,550 in Northern Ireland and one in 1,960 in Scotland are thought to have had Covid in the most recent week.

Sarah Crofts, head of analytical outputs for the ONS Covid-19 Infection Survey, said there is a mixed picture of infection levels across the UK.

“Although we have seen an early indication of a potential increase in England, rates remain low and it is too soon to say if this is the start of a trend,” she said.

The swabs suggest that any rise so far is caused by the Kent variant. The time taken to perform genome sequencing means there is a greater lag in results for the B.1.617.2 variant first found in India. In the four weeks to 9 May – the latest period the ONS has data for – the survey found only two confirmed cases of the B.1.617.2 variant.

Christina Pagel, professor of operational research at University College London, said the ONS results do not necessarily give the full picture as the survey is based on random sampling, which can miss local pockets of spread or the growth of new variants.

“For instance ONS shows infections in Scotland declining whereas case numbers and positivity rate in Scotland are going up driven by localised spikes in Glasgow and East Renfrewshire,” she said.

Scientists advising the government expect infections to rise as England follows the roadmap out of lockdown, but the latest ONS numbers do not take account of the easing of restrictions on 17 May.

While Public Health England (PHE) has said it is highly likely current Covid vaccines will protect against severe disease, hospitalisation and death for the India variant, scientists are concerned that it appears to be more transmissible than the Kent variant, warning it may fuel a serious third wave of infections, which could still lead to a rise in hospitalisations, an increase in cases of long Covid and exacerbate backlogs in the NHS.

According to data released by PHE on Thursday there have now been 3,424 confirmed cases of the B.1.617.2 variant in the UK, up from 1,313 cases confirmed by the previous Thursday.

Meanwhile the public have been warned not to be alarmed over the designation by Public Health England on Thursday of another variant, called AV.1, as a “variant under investigation”.

This has been detected in the UK, Greece and Chad, with most cases in the UK found in Yorkshire and the Humber.

Greg Fell, director of public health in Sheffield, said the variant is being monitored.

“Please don’t be alarmed, we want you to continue doing what you have been for the past year. Follow the guidance, continue to wash your hands regularly and wear a mask indoors.”
#Boris Johnson  #Coronavirus  #Vaccines  #COVID-19  #Johnson  #vaccine  #Covid
Add Comment