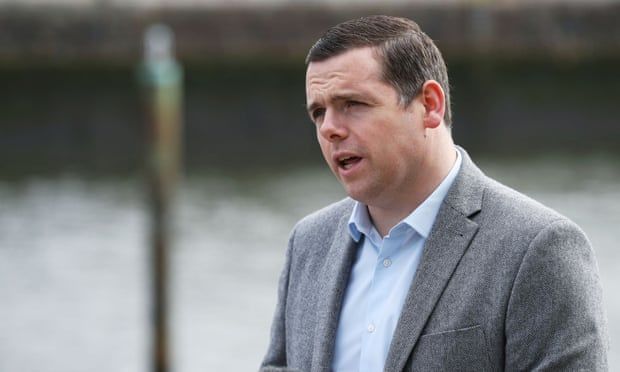 One of the UK’s most senior Conservatives has broken ranks and called for Boris Johnson to resign if he breached ministerial rules over the refurbishment of a Downing Street flat, amid new claims that undeclared donations have been sought to fund the prime minister’s lavish lifestyle.

Douglas Ross, the leader of the Scottish Conservatives, said on Sunday that Johnson should “of course” quit if he is found to have breached the code by failing to be honest about cash payments from a Conservative donor sought to redecorate his official residence.

His intervention, which caught No 10 by surprise, came after Johnson was accused of successfully obtaining funds for the flat from a second donor, while a third was alleged to have been asked to pay for his one-year-old son’s care.

It comes as the party attempts to move on from a torrid week and gears up for elections across the UK on Thursday. Labour has narrowed the Tories’ lead since the barrage of sleaze allegations began.

Appearing on BBC One’s The Andrew Marr Show, Ross was asked if Johnson should stand down if found to be in breach of the ministerial code.

The new standards adviser, Christopher Geidt, is investigating whether Johnson has breached the ministerial code, which sets out the conduct expected of ministers and how they discharge their duties.

Johnson would be expected to show that his behaviour was consistent with the code, which makes clear there should be “no actual or perceived conflicts of interest”.

His former chief aide Dominic Cummings reignited the row over the flat renovation after claiming the prime minister had sought donors’ cash in an “unethical, foolish, possibly illegal” scheme.

Money from the Tory donor David Brownlow was allegedly used to fund part of a £200,000 renovation in the flat above No 11 Downing Street where Johnson resides with his fiancee, Carrie Symonds, and their son, Wilfred. It is alleged that Symonds had described the flat as “a John Lewis nightmare” when they moved in after Theresa May left.

The Sunday Times reported that there was a second invoice settled by a third party – believed to be another Conservative donor – directly with the contractor. Downing Street refused to comment on this claim.

Yet another Tory donor has claimed that they were asked to foot the bill for a nanny for Wilfred, the Mail on Sunday and the Sunday Times claimed. The donor is alleged to have said: “I don’t mind paying for leaflets but I resent being asked to pay to literally wipe the prime minister’s baby’s bottom.”

Former Downing Street insiders claim that Johnson’s finances are a mess and are a reflection of the way he runs the government. He earns £157,372 a year as prime minister but he is said to have told friends that he requires £300,000 to keep afloat.

Johnson has retained the power to frustrate any inquiry by Geidt into his behaviour. He remains the “ultimate arbitrator” of the code and gets the final say on whether he broke the rules, a situation Labour says allows him to be his own judge and jury.

Dame Margaret Hodge, the Labour MP and former chair of the public accounts committee, said the prime minister and his government were not maintaining the standards needed to maintain a healthy democracy.

“If you’re taking money in this secretive, private way, how is it influencing how you are approaching the issues of state?

“This is a really dangerous point in which our democracy could be undermined,” she said.

“Is it the tip of an iceberg and are there other ways in which the funding of his rather lavish lifestyle has been dependent on individuals giving him cash and what do they want in return?”

The Electoral Commission this week launched an investigation into whether any donations or loans to pay for the refurbishment of his residence in No 11 were properly declared.

The foreign secretary, Dominic Raab, was asked to defend Johnson on Sunday, but declined to say whether he should resign if he is found to have broken the law.

“I think the right thing for me to do is respect the integrity of those reviews and let them run their course,” he said.

Raab also declined to deny a claim that a second invoice for renovations may have been settled with the supplier by a Tory donor.

Asked about the suggestion that a Tory donor was asked to pay for a nanny, he said: “I have no idea, you don’t have conversations like that with the PM,” he told Sky’s Sophy Ridge on Sunday.

Although earlier polls suggested the sleaze allegations were not significantly denting public support for the Tories, two new surveys indicated they could be having an effect before the local elections in England and votes for the parliaments in Scotland and Wales.

The Conservatives (42%) fell to a five-point lead over Labour (37%), according to the Opinium poll of more than 2,000 adults between Wednesday and Friday.

In separate polling, Focaldata put Labour on 39%, one point behind the Tories, who previously had a healthy lead, according to the Sunday Times.

A No 10 spokesperson said the prime minister “has covered the cost of all childcare”, but did not respond when asked if he paid for the original bill himself or had reimbursed somebody else.

Johnson has denied breaking any laws over the refurbishment of his residence and insisted he has paid “personally” for the works.