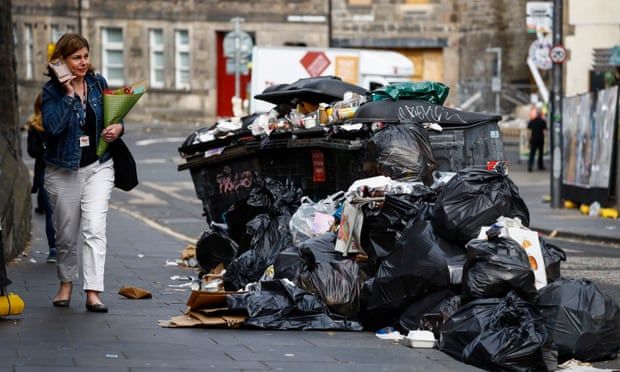 Unite says offer from Scotland’s councils is unacceptable and ‘represents a waste of precious time’
Refuse workers in Scotland will continue to strike next week after the Unite union rejected the latest offer from local authorities.

Council cleansing staff across much of the country are striking over pay. A strike in Edinburgh that led to rubbish building up in the streets during the city’s festival fringe – the busiest time of year for the city – is due to end on Tuesday morning. But further action in other council areas is planned.

Negotiations were taking place over the weekend between unions and the Convention of Scottish Local Authorities (Cosla) but Unite’s local government committee rejected an offer from Cosla.

The offer was reported to include a non-recurring 5% payment to staff, which would range from £989 to £2,000. Cosla has not confirmed the terms of the proposed deal.

Unison, Unite and GMB, the three unions whose members are striking, are calling on Cosla, the SNP-led umbrella group for Scotland’s 32 councils, to agree to a £3,000 flat-rate pay award rather than a percentage increase, which would benefit the highest-paid staff.

Wendy Dunsmore, Unite’s industrial officer, said the union had rejected the latest pay offer outright. “The offer remains unacceptable and it represents a waste of precious time,” she said.

“We understand the gravity of the situation across the country but equally our members are facing the worst cost of living crisis in a generation. Unite’s strike action remains scheduled for next week unless Cosla gets back to us with a credible offer which addresses our primary concerns.”

Two of Scotland’s other main unions, Unison and GMB are also considering the new offer.

Earlier in the day, the Scottish health secretary, Humza Yousaf, told the PA news agency he hoped for a resolution “sooner rather than later”.

“Public Health Scotland have made the point about the public health impacts of the bin strikes” Yousaf said. “Nobody wants to see that, particularly when we’re showcasing cities like Edinburgh during the fringe festival and we have tourists from across the world coming.”

The first minister, Nicola Sturgeon, has faced a backlash after attending a series of events and public appearances while people have been living with what Scottish Labour’s business manager, Neil Bibby, described as “litter-strewn streets”.

“The first minister needs to fund councils properly and secure a fair deal for council workers and bring an end to this chaos, as well as using the powers she has to help Scots struggling with soaring bills,” Bibby said.

Sturgeon travelled to Copenhagen on Friday to officially open the Scottish government’s Nordic office, and she made a number of appearances at the Edinburgh festivals.
Add Comment