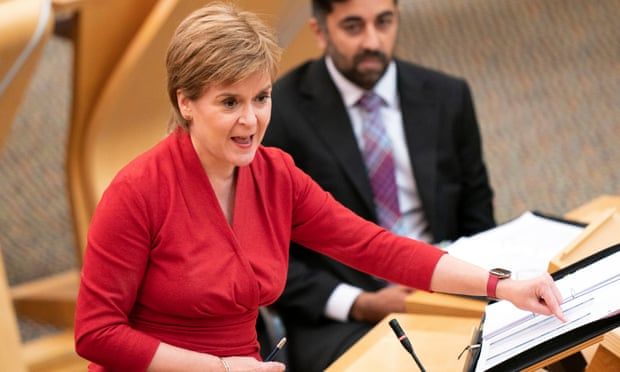 Sturgeon’s proposals described by Tories as ‘shambolic’ and by nightlife industry as ‘completely incoherent’
Opposition parties have said the Scottish government’s proposals for vaccine passports are an infringement of civil liberties as sports and industry leaders described them as unworkable and a threat to livelihoods.

On Wednesday, Nicola Sturgeon set out plans to require vaccine certificates for entry to nightclubs and large-scale indoor and outdoor events in an attempt to curb rising Covid infections before the autumn.

John Swinney, deputy first minister, had previously described passports as “the wrong way to go”, while the Scottish Greens – who last week entered a power-sharing agreement with the Scottish government – described them as “discriminatory”.

Douglas Ross, leader of the Scottish Conservatives, told the Holyrood chamber at first minister’s questions on Thursday that the proposal – which will be voted on by MSPs next week – represented “shambolic, last-minute, kneejerk decision-making” and suggested that tensions were already emerging between the SNP and the Scottish Greens.

Sturgeon replied that she believed businesses were showing “understanding and pragmatism … in recognition of the severity of the situation we face”.

But Neil Doncaster, chief executive of the Scottish Professional Football League, earlier issued a warning that the plans would have “significant unintended consequences” for clubs, with the proposals for events of more than 10,000 people affecting Scotland games and some Scottish Premiership matches.

He told BBC Sport Scotland: “It’s not clear what IT infrastructure will be in place, what timescales clubs will be asked to work to, or what can be done for those without smartphones.

“And it’s not clear if it’s going to cut across terms and conditions of seasons tickets already bought by people across the land.”

Although Sturgeon said on Wednesday that she hoped not to extend the measure to other venues, the managing director of the Scottish Licensed Trade Association (SLTA), Colin Wilkinson, described it as a “threat hanging over the whole of the hospitality industry”.

Wilkinson also pointed out that, with a wide variety of hybrid premises such as pubs, bars and hotels that are larger than nightclubs and offer various entertainments, further clarity was needed on what constitutes a nightclub. “Consultation with the industry before this announcement was made would have been helpful,” he said.

Mike Grieve, chair of the Night Time Industries Association Scotland and owner of the Subclub in Glasgow, told Good Morning Scotland on BBC Radio Scotland that the plans were “completely incoherent” and lacking consistency, for example between live music venues and nightclubs.

Concerns have also been raised about the fairness of requiring certification for the forthcoming TRNSMT festival in Glasgow, which is likely to be attended by 16- and 17-year-olds who have yet to have had the opportunity to be fully vaccinated.

The Scottish Liberal Democrat leader, Alex Cole-Hamilton, said his party was “fundamentally opposed” to the introduction of vaccine passports, raising concerns that this was “the first time that Scots will have to provide medical data to strangers to access freedoms in our society”.

Sturgeon said that she respected his party’s “principled position” and that the issue should be debated, but she believed that the proposal was proportionate and, it was hoped, a time-limited step.
#vaccine  #Covid
Add Comment