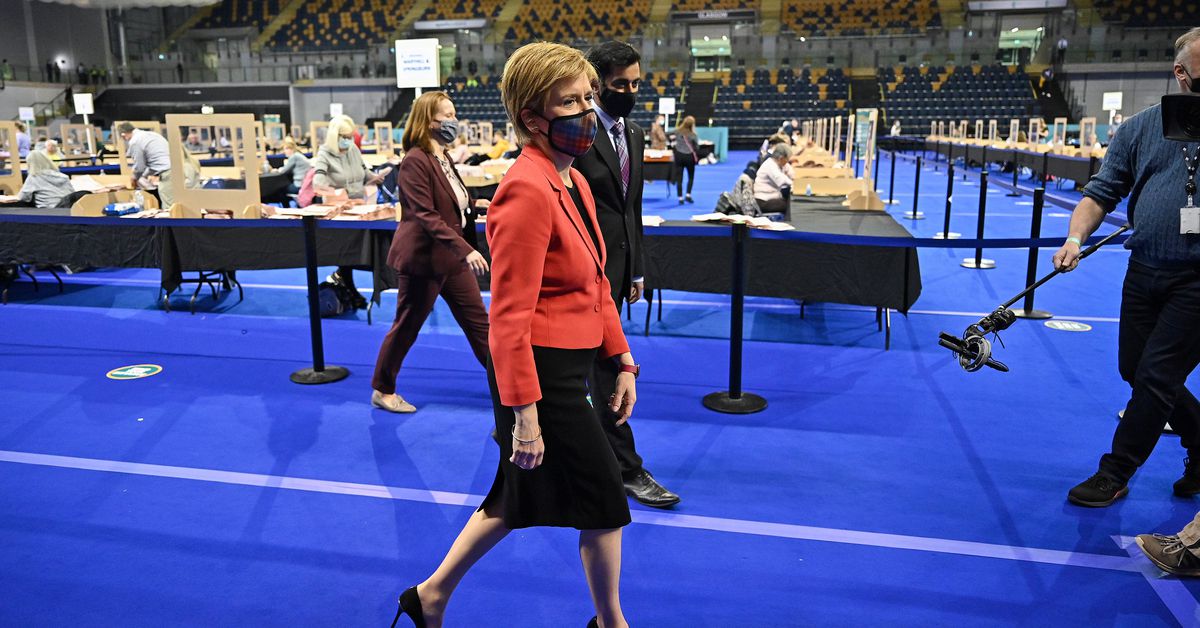 Pro-independence parties won a majority in Scotland’s parliament on Saturday, paving the way to a high-stakes political, legal and constitutional battle with British Prime Minister Boris Johnson over the future of the United Kingdom.

Scotland's First Minister Nicola Sturgeon said the result meant she would push ahead with plans for a second independence referendum once the COVID-19 pandemic was over, adding that it would be absurd and outrageous if Johnson were to try to ignore the democratic will of the people.

"There is simply no democratic justification whatsoever for Boris Johnson, or indeed for anyone else, seeking to block the right of the people of Scotland to choose our own future," Sturgeon said.

"It is the will of the country," she added after her Scottish National Party (SNP) was returned for a fourth consecutive term in office.

The British government argues Johnson must give approval for any referendum and he has repeatedly made clear he would refuse. He has said it would be irresponsible to hold one now, pointing out that Scots had backed staying in the United Kingdom in a "once in a generation" poll in 2014.

The election outcome is likely to be a bitter clash between the Scottish government in Edinburgh and Johnson's United Kingdom-wide administration in London, with Scotland's 314-year union with England and Wales at stake.

The nationalists argue that they have democratic authority on their side; the British government say the law is with them. It is likely the final decision on a referendum will be settled in the courts.

"I think a referendum in the current context is irresponsible and reckless," Johnson told the Daily Telegraph newspaper.

Alister Jack, the UK government's Scotland minister, said dealing with the coronavirus crisis and the vaccine rollout should be the priority.

"We must not allow ourselves to be distracted - COVID recovery must be the sole priority of Scotland’s two governments," he said.

The SNP had been hopeful of winning an outright majority which would have strengthened their call for a secession vote but they looked set to fall one seat short of the 65 required in the 129-seat Scottish parliament, partly because of an electoral system that helps smaller parties.

Pro-union supporters argue that the SNP's failure to get a majority has made it easier for Johnson to rebut their argument that they have a mandate for a referendum.

However, the Scottish Greens, who have promised to support a referendum, picked up eight seats, meaning overall there will be a comfortable pro-independence majority in the Scottish assembly.

Scottish politics has been diverging from other parts of the United Kingdom for some time, but Scots remain divided over holding another independence plebiscite.

However, Britain's exit from the European Union - opposed by a majority of Scots - as well as a perception that Sturgeon's government has handled the COVID-19 crisis well, along with antipathy to Johnson's Conservative government in London, have all bolstered support for the independence movement.

Scots voted by 55%-45% in 2014 to remain part of the United Kingdom, and polls suggest a second referendum would be too close to call.

Sturgeon said her first task was dealing with the pandemic and the SNP has indicated that a referendum is unlikely until 2023. But she said any legal challenge by Johnson's government to a vote would show a total disregard for Scottish democracy.

"The absurdity and outrageous nature of a Westminster government potentially going to court to overturn Scottish democracy, I can't think of a more colourful argument for Scottish independence than that myself," she said.