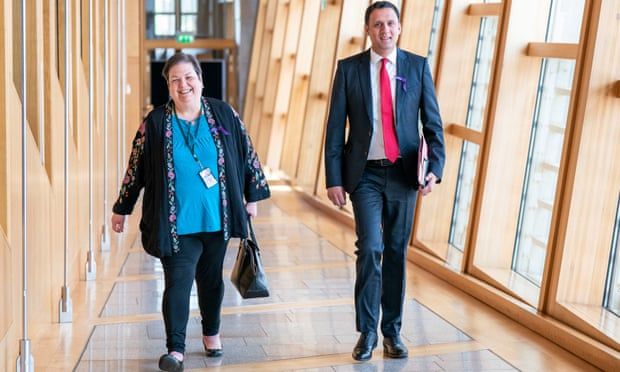 Labour installed as minority administration in capital with Lib Dem and Tory help, to the outrage of SNP
The Scottish National party has failed to take all Scotland’s largest cities after Labour won control of Edinburgh with Liberal Democrat and Tory help.

The SNP had hoped to retain power in the Scottish capital after winning the most seats and brokering a coalition deal with the Scottish Greens which left them three seats short of overall control.

However, to the outrage of the SNP’s leadership, the Greens and some leftwing critics, Labour was installed as the city’s minority administration after giving the Liberal Democrats and Tories paid convenership and deputy posts on key committees. In a sign of internal unease at the deal, two Labour councillors abstained.

Labour insisted those posts fell short of a coalition – which had been largely ruled out by its Scottish leader, Anas Sarwar, before the council elections three weeks ago – since they were in non-party political, regulatory posts in licensing and planning.

John Swinney, the SNP’s deputy first minister, who is deputing for Nicola Sturgeon while she is off work with Covid, accused Sarwar of hypocrisy during first minister’s questions. He said Labour was now in bed with the “toxic, corrupt, out of touch Tory party … vote Labour; get Tory”.

The vote in Edinburgh has amplified a defining trend in Scottish politics, where political alliances are increasingly defined by a party’s stance on Scotland’s constitutional future.

The Greens are pro-independence and, alongside the proposed coalition deal in Edinburgh, have backed a minority SNP administration in Glasgow, as well as holding two ministerial posts in the Scottish government.

The SNP now runs the cities of Glasgow, where it narrowly retained power; Aberdeen, where it ousted Labour; Dundee, where it won its only overall majority; Perth, where it ousted the Tories running Perth and Kinross; and Inverness, where it runs Highland council in a coalition with independents.

The SNP cemented its position as Scotland’s dominant party on 5 May by winning 34% of the national vote share, its best council performance, and 454 of Scotland’s 1227 council seats, again its highest share yet.

In other areas where the SNP won most seats but were blocked from power by pro-UK parties, Labour runs minority administrations in Stirling, South Lanarkshire, West Lothian, East Renfrewshire and in Fife, often after offering non-political posts to other groups or independents.

Labour said it has held true to its promise to avoid coalition deals; it added it would work with the SNP and Greens wherever possible, and did not assume it would win backing on its policies from either the Lib Dems or Tories.

Jackie Baillie, Scottish Labour’s deputy leader, said Swinney’s “sense of entitlement is astonishing. The SNP don’t own Scotland and they don’t have a God-given right to rule. We’re not in a formal coalition with the SNP or Tories anywhere: that means we have to listen to all parties and councillors, and reflect their concerns.”

Scotland’s councillors are elected using the single transferrable vote system of proportional representation, which makes it very unlikely one party will win an overall majority and is designed to promote cross-party working.
#Covid
Add Comment