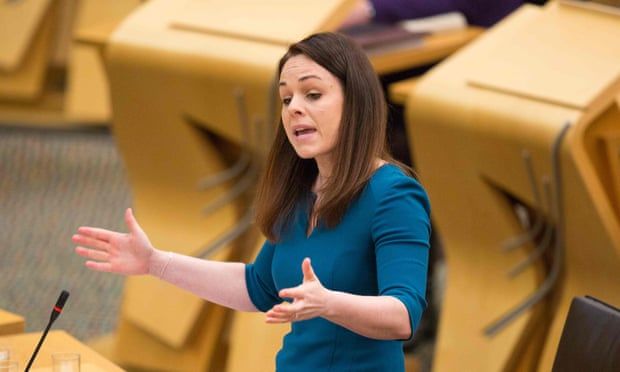 Scotland’s soaring deficit is no barrier to independence, says minister

Scottish finance secretary says notional deficit of £36.3bn for 2020-21 does not undermine case for leaving UK
Scotland‘s deficit more than doubled to £36.3bn, or 22.4% of GDP in 2020-21, the highest yearly figure since devolution, but it should not be an obstacle to making the case for independence, according to Scotland’s finance secretary.

Increased spending and falling revenues as a result of the Covid-19 pandemic, compounded by the continuing oil price slump, increased Scotland’s notional deficit for 2020-21 from 8.6% of GDP in 2019-20, to 22.4%.

This is significantly higher than the 14.2% for the UK as a whole, and more than twice the advanced economy average of 11.7% estimated by the International Monetary Fund. The figure could rule an independent Scotland out of EU membership because of the rules on fiscal deficits.

But Scotland’s finance secretary, Kate Forbes, said deficits had increased hugely across the world as a result of the pandemic, adding: “It is not an obstacle to making the case for independence because deficits across the world have risen exponentially and having the highest deficit in Europe does not seem to be an obstacle for the UK government ... This is a case for having the levers, the full control to manage our fiscal sustainability.”

The annual Government Expenditure and Revenue Scotland (GERS) report, compiled by Scottish government statisticians, illustrates how public finances were affected by the pandemic. It measures the period from April 2020 – a week after the first national lockdown began – to the end of March this year and includes a geographical share of North Sea oil.

Total spending in Scotland rose to a record £99.2bn, reflecting the costs of health and economic interventions such as furlough in response to the pandemic, while income from taxes fell to £62.8bn.

But opposition parties said the report underlined the importance of remaining within the UK, with Scottish Labour highlighting that total spending was equivalent to £18,144 per person – £1,828 per person greater than the UK average, while revenue raised in Scotland was £382 less per head.

The Scottish Conservatives calculated that this “union dividend”, the combined value of higher spending and lower revenue, had increased to £2,210 per person.

She added it was “reckless beyond imagining to pursue a divisive and economically catastrophic referendum during the recovery”.

Nicola Sturgeon said during the Holyrood election campaign earlier this year that her “strong preference and intention” was to hold another referendum in the first half of the parliament, up to 2023.

Forbes said she “remains committed to refreshing the economic case [for independence] ...when we are able to see beyond the pandemic”.

While the GERS figures are an estimate, the Institute for Fiscal Studies has previously described them as “the most sensible starting point” for assessing the fiscal challenges that an independent Scotland would face.

Forbes said this was a “notional deficit – not a real deficit – estimated on 70% UK government taxation and 40% of UK decisions on spending. The Scottish government in the event of independence could and would follow a different programme when it comes to managing our economy.”
#COVID-19  #Covid
Add Comment