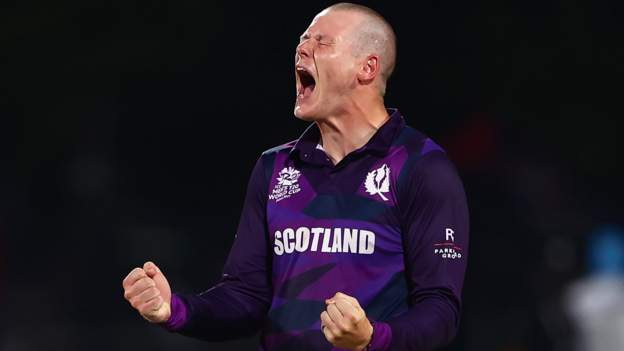 Scotland reached the main draw of the T20 World Cup for the first time with an eight-wicket win over Oman.

They chased 123 with three overs to spare in Al Amarat to wrap up a third victory in three games and progress as winners of Group B.

Josh Davey took 3-25 before Kyle Coetzer made 41 and Richie Berrington 31 not out off 21 balls in Al Amarat.

Bangladesh earlier beat Papua New Guinea by 84 runs to secure their spot in the Super 12s.

Berrington hit a six into the stands to seal Scotland's victory and spark celebrations in the dug-out and among the small section of travelling fans.

Scotland will play India, New Zealand, Pakistan and Afghanistan in Group 2 of the Super 12s.

"What a day that is for Scottish cricket. The boys are absolutely buzzing," said player of the match Davey.
"There's a belief within the side. We're a very strong side - we've got a lot of bases covered. We really think we can cause some upsets - and we already have.

"T20 is about momentum, so hopefully we can take that into the next phase."

Captain Coetzer said: "There's no reason to fear any games in that group.

"It is going to be tough and an extremely exciting group, but we go into every game full of hope and belief that we are capable of winning." 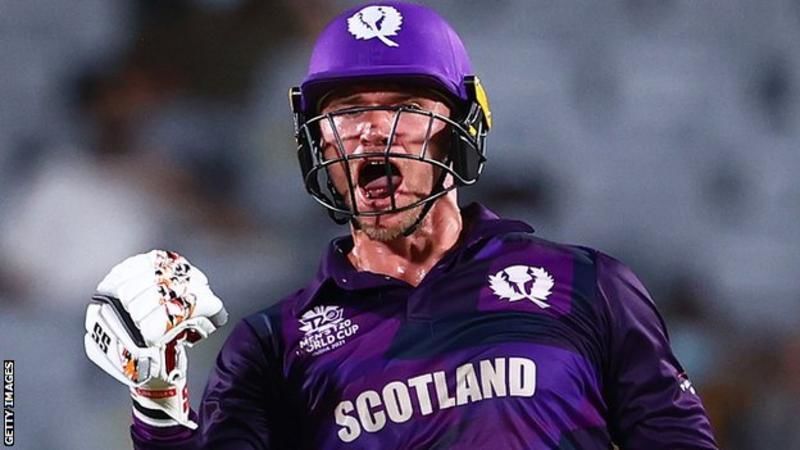 From scraping into World Cup to group domination

Scotland - ranked 14th in the world - arrived at the World Cup with one win from their previous six global tournaments - against Hong Kong in the 2016 World T20.

They almost missed out on this tournament altogether as they came within one defeat of being knocked out of the qualifying event in 2019.

They lost to Singapore, Namibia and Netherlands to finish fourth, before triumphing in the fifth-place play-off semi-finals.

This week in Oman they have beaten Test nation Bangladesh, dispatched PNG and Oman with ease, recorded their highest score at a T20 World Cup and seen Berrington become the first Scotland player to make a half-century at the tournament.

By reaching the Super 12s, Scotland also made sure of an automatic spot at next year's T20 World Cup in Australia.

Knowing defeat would end their tournament and send Oman through, Scotland put in a disciplined performance, reducing the World Cup co-hosts to 13-2 before seamer Davey took three wickets in the final over.

Coetzer, who struggled for form before the tournament, hit two fours and three sixes to get Scotland's measured chase under way, before Berrington provided the late fireworks with three huge sixes.

Beaten by Scotland on the opening day of the tournament, Bangladesh recovered to win their next two games and qualify as group runners-up.

They will face England, defending champions West Indies, Australia, South Africa and the winners of Group A - likely to be Sri Lanka - in the Super 12s. The final two qualification spots will be decided on Friday.