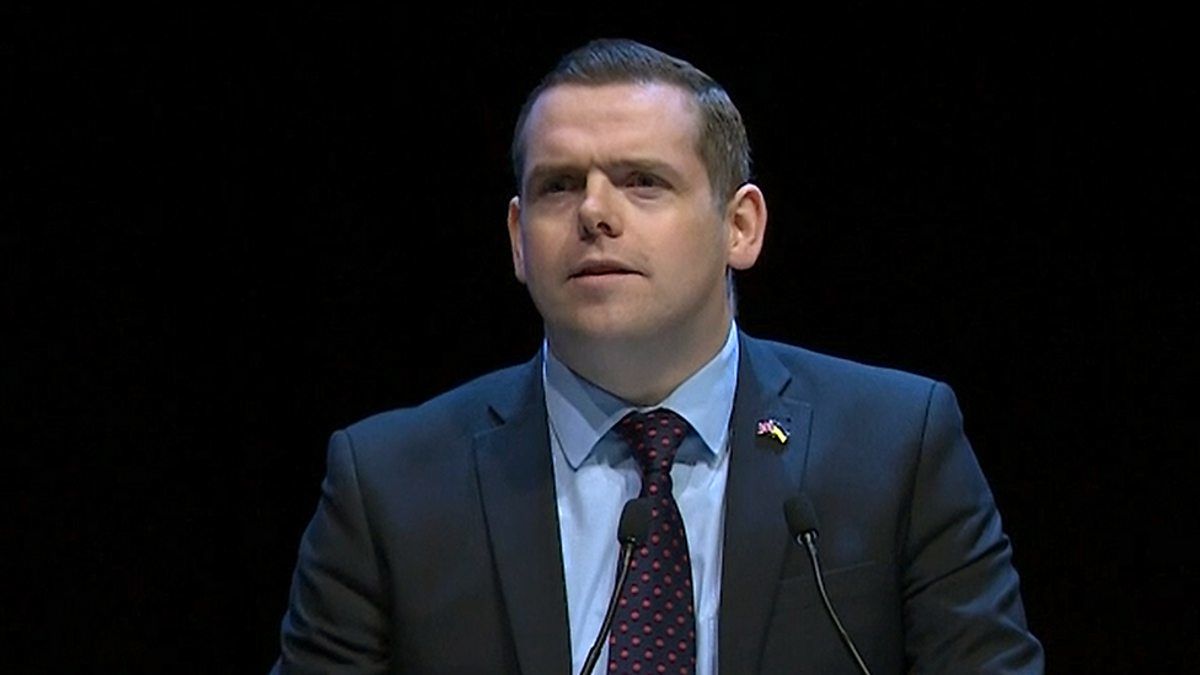 Scotland must shake off the "dead hand of nationalism" if it is to avoid becoming increasingly bitter and inward looking, the Scottish Conservative leader has said.

Douglas Ross told the party's conference in Aberdeen that he grew up in a Scotland that was confident and outward looking.

But he argued that Scotland was now divided against itself.

He said the country was becoming "smaller every day" under the SNP.

Mr Ross missed the weekly First Minister's Questions session in the Scottish Parliament on Thursday because of a bad throat - but was well enough to deliver his speech.

He welcomed Prime Minister Boris Johnson to the conference on Friday afternoon, with the two men shaking hands on stage ahead of Mr Johnson's speech.

Mr Ross called for the PM to step down earlier this year over lockdown parties in Downing Street - but withdrew that last week, saying the row should be "put on pause" because of the Russian invasion of Ukraine.

He said the only person who would benefit from Mr Johnson being removed from office would be Vladimir Putin.

But his comments were condemned by political opponents, with SNP MP Ian Blackford describing it as an "utterly humiliating u-turn" and Labour leader Anas Sarwar saying Mr Ross "should not be using the Ukraine crisis to go back on his principles". 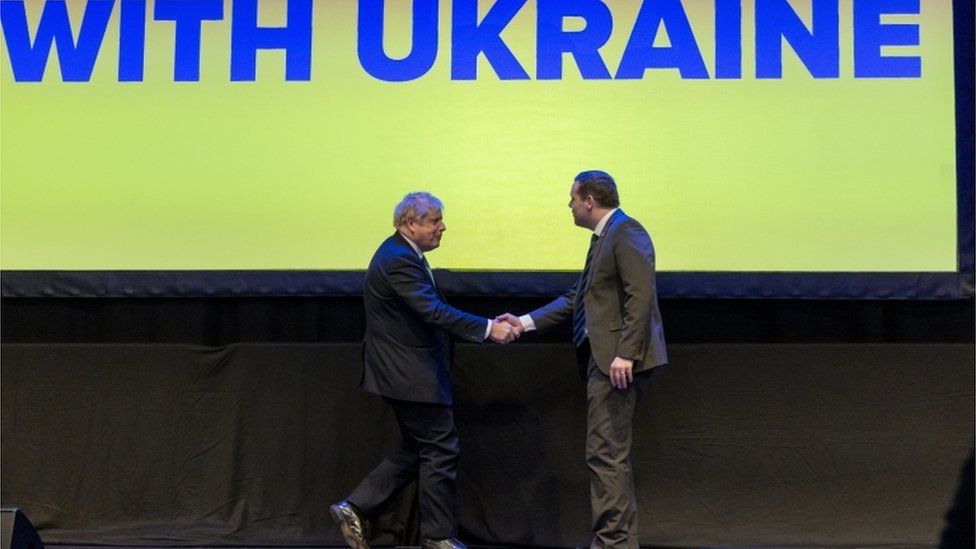 In his speech, Mr Ross asked whether anyone would say that Scotland is a better place today than it was when the SNP first came to power in 2007.

He said: "The nation I grew up in was confident and outward looking, yet the nation my children grow up in today is far more bitter and inward-facing.

"That isn't a record that any government should be proud of - Scotland is becoming a smaller country every day that the SNP remain in power.

"We are becoming worse off, both economically and intellectually, because we are stuck with a government that won't take any responsibility."

He also called on Tory activists to "bring together the silent majority of working people to end this stalemate" and provide a real alternative for people who are "fed up with the last 15 years of SNP stagnation".

He said that this alternative would "end the referendum obsession" and "take back Scotland from the SNP and allow us all to move forward together".

The two-day Scottish Conservative conference has seen the party call for the Curriculum for Excellence (CfE) to be scrapped in Scotland's schools.

And it has unveiled plans to bring forward a bill in the Scottish Parliament that would create a register of domestic abusers.

The database would work in a similar manner to the sex offenders register, with police or local authorities being able to take action if a risk was identified.

We've got used to the Scottish Conservatives going into elections - not to win - but to retain second place. That was the case at last year's Holyrood election. It will be again at the council elections in May.

What has changed is that Douglas Ross has set a much greater ambition for the future - to replace Nicola Sturgeon as first minister in 2026.

That might sound far-fetched. The gap between the parties is huge and Mr Ross accepts a political mountain lies ahead. He is also aware of the potential for his UK party leader and the partygate scandal to drag down Scottish Tory fortunes.

That is why Boris Johnson got no mention, never mind an endorsement in this speech, even if Douglas Ross has dropped calls for the PM's resignation.