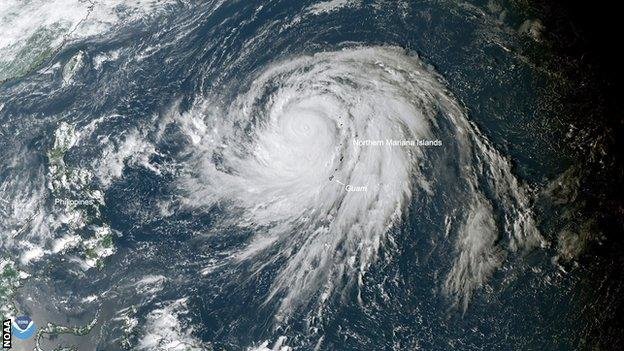 England's Rugby World Cup Pool C match against France is called off because of the approach of Typhoon Hagibis.
World Rugby is expected to provide official confirmation of the cancellation at 04:00 BST on Thursday.

Hagibis is moving towards Japan and expected to make landfall on Saturday.

England were due to meet France in Yokohama. There is no news yet on Scotland's Pool A match against Japan, which is scheduled to take place in the same stadium on Sunday.

If the Scotland-Japan match was to be cancelled, under tournament rules Gregor Townsend's side are likely be knocked out of the World Cup.

Cancelled matches are declared a draw with both sides awarded two points each.

England and France have already qualified for the quarter-finals and their match was due to decide top spot in Pool C.

The cancellation means Eddie Jones' side, who lead the French by two points, will progress as winners and face a probable quarter-final against Australia, with Wales expected to top Pool D and therefore play France.

Scotland are third in Pool A on 10 points with leaders Japan on 14 and need to beat the hosts to go through, potentially relying on bonus points.

If second-placed Ireland beat Samoa in Fukuoka on Saturday, a weather-enforced two-point haul would mean Scotland finish third in Pool A and go out.

It has been suggested Scotland's match with Japan could delayed by 24 hours, even though that would be against tournament rules.

BBC weather presenter and meteorologist Simon King said Hagibis is "one of the most powerful tropical cyclones this year".